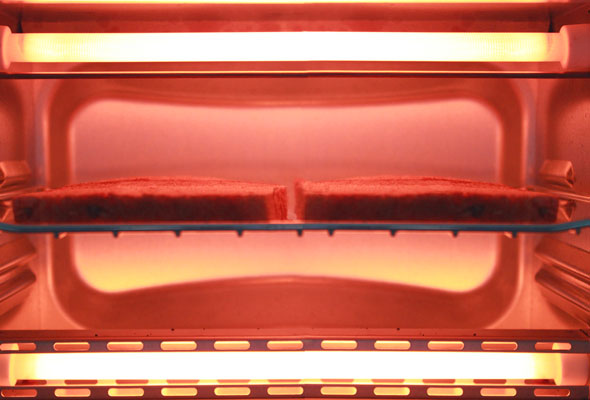 I’m waiting for the “ding”— that polite, almost British way that my trusty little Toaster Oven has of saying, “Yes, we’re ready.” The rowdy, overeager “kerchunk-sprang” and obtrusive popping slots of my little guy’s countertop rival isn’t for us. No, just a lovely, succinct “ding” signaling near-perfection.

But now I wait.

I’m not very good at waiting. I peer through the hazy, glass-fronted door to see how things are coming along in there, and to catch a whiff of that bready, buttery, slightly nutty smell of almost-ready. Comfort and sustenance from an inanimate object. I wait.

I particularly love toast prepared in A Very Specific Way. Properly made toast begins with a good, solid slice of a fairly yeasty bread made by a baker who actually likes to make bread. Then it’s run through the Toaster Oven once, dabbed generously with pats of salted butter, then run through again to melt the butter and brown the edges. That’s it. Simple. Elegant. Perfect. Any questions on this?

I view any deviations from A Very Specific Way as failures of will. And herein lies a truth: I suspect that we all, each one of us, have a very clear idea about how to prepare toast and consider any other method as just plain wrong.

I’m married to a very smart woman with degrees in philosophy and architecture. And yet, despite 20-some years of coaching, mentoring, and pleading, she remains somehow inept in this regard. Her “recipe” involves jabbing bits of refrigerator-hardened butter onto lukewarm, just-toasted bread, then rummaging around for some jam to slather on as a topping. The butter never melts. Ever. I always thank her for the effort and then stare off thoughtfully, wondering about this discrepancy.

When our sons were young, the boys and I would sit on the couch while I read to them from a book called Bread and Jam for Frances, which was about a little badger who loved only toast. The moral had something to do with the need for variety in one’s diet, but we didn’t much care about that. What we cared about was that at the end of the story, we’d stand up from the couch in unison and yell at the top of our lungs, “Let’s make toast!” I’m proud to say that they’ve grown to be two young men who know how to make a really fine piece of toast. They use a Toaster Oven. Just like their old man.

The Toaster Oven arrived on the scene sometime in the mid-’60s and has been a mainstay of wedding gift registries—and my morning routine—ever since. It’s flexible, space efficient, and perfect not just for toasting but for properly melting butter onto your toast. That’s why they call ’em “Toaster Ovens”—they make damn fine toast. Still, the appliance is sort of like a little utility infielder for the kitchen, because if you’re going to use the bench space anyway, why not use it for more than one purpose? Besides, if you try to melt butter onto your toast using a regular toaster, sooner or later you’ll make a helluva mess—and probably have a little more excitement in the kitchen than you’d planned.

On ratty-feeling days, again when the kids were little, I’d make cinnamon toast by sprinkling a little sugar and cinnamon over the butter for that second run through the Toaster Oven. I did this to remind them that I was not only sometimes unpredictable, but handy to have around.

I try to remind my wife of this from time to time, too. As such, I have to admit that there may—I said may—be other ways to make toast. I’ve sautéed slices of bread in duck fat and have been appropriately dazzled. I’m always amazed by just how tasty it is to grind a garlic clove onto a slice of unbuttered toast and then smother it with olive oil, even though that seems like cheating given that garlic and olive oil would make a doorstop tasty. Even basic toast, when topped with cooked-just-right-and-buttered fresh spring asparagus, a chopped hard-boiled egg, some pepper, and a few largish slivers of Parmesan cheese, accompanied by a chilled, cheap white wine, says to my wife that I really love her. Even if she can’t make toast. Works almost every time.