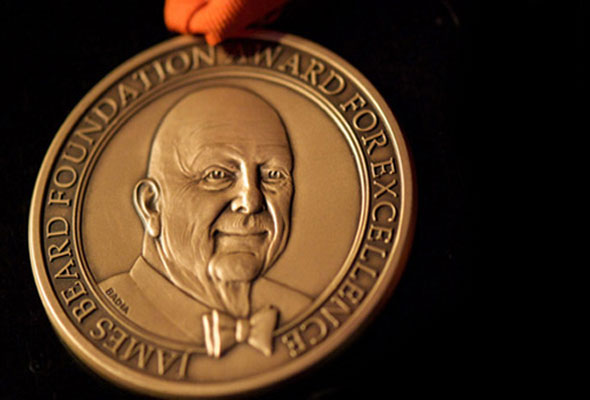 In spring, which kicked off last night at 7:20 p.m., a young man’s (or woman’s) fancy supposedly turns to love and all that kind of folderol. But if your amour is of the gastronomic kind, you’re probably also smitten with the James Beard Foundation’s Twitter feed. We certainly are. The reason is that today was the grand unveiling of the nominees for the 2011 James Beard Awards. The Foundation announced the (most assuredly) deliriously happy noms at an exclusive luncheon at the Oregon Culinary Institute in Portland, OR. And the good folks from the Foundation simultaneously released the names via Twitter–hence our sore index fingers, the result of hitting the update button so often.

We’re elated to see so many of the writers, cookbook authors, and chefs we’ve had the pleasure and privilege of working with during the past year featured in today’s nominations.

We would have put money on David Tanis’s Heart of the Artichoke, The Essential New York Times Cookbook, Sarabeth’s Bakery, My Sweet Mexico, Stir-Frying to the Sky’s Edge, and Encyclopedia of Jewish Food being included. After all, we fell for these books (and sometimes over them, given our cramped space) the moment we first flipped through their pages. Some of the recipes we love? From My Sweet Mexico there’s Mexican Hot Chocolate; from the epic New York Times collection there’s a Boeuf Bourguignon and the most-requested recipe ever from the anals of the NYT Dining pages, Teddie’s Apple Cake; from Sarabeth’s there’s Margaret’s Espresso Cake and Linzer Heart Cookies; from Ham there’s a Ham and Potatoes Salardaise and a Roasted Ham with Maple Glaze; from Grace Young’s stir-frying primer comes Cashew Chicken and—are you ready for this?—wok-popped popcorn; and there’s Carrot Muffins from (what else?) Good to the Grain. And as far as Heart of the Artichoke goes, don’t miss two of the many, many recipes we’ve dog-eared: Roasted and Braised Turkey and Fork-Mashed Potatoes.

Among other well-deserving James Beard Award nominees are Rozanne Gold’s Radically Simple, which brings us a quick Moroccan Spiced Salmon and Crisp Potato Cakes that are ethereal and easy enough to have any night—or day—of the week, and Michael Chiarello’s Bottega, which brings us a different sort of simplicity in the kitchen, such as Fresh Figs and Burrata Cheese.

And although we havn’t yet featured recipes from The Blue Chair Jam Cookbook and Tartine (our bad), you can be sure to find them here soon.

It’s also wonderful to see so many writers we love to read snatching up kudos in the print and online journalism categories. There’s the collective consciousness kept in check by Barry Estabrook and Tom Philpott, and then, conversely, there’s our ever-growling appetite incited by the writing of Adam Platt of NY Magazine. Then there’s Pulitzer prize-winning critic Jonathan Gold of LA Weekly, who was nominated for not just one but two categories, and who was kind enough to spare us a few words about pork belly this past year. And let’s not forget chef and Spanish proselytizer José Andrés, who always seems to have something up his chef’s sleeve.

For a full list of nominees–from the book, journalism, chef, and restaurant categories–visit the James Beard Foundation website.

Again, congratulations to all the nominees. Thank you for making 2010 a wonderfully tasty year.

Interested in attending the awards? The James Beard Awards for book, broadcast, and journalism will be held on Friday, May 6, and the Awards Gala and Reception will be held on May 9th.