An arugula, fennel, and orange salad makes a bright addition to a summer dinner or even a light lunch. Sweet citrus, licorice-y fennel, and slightly spicy arugula all work together so well, you’ll wonder why you’ve never tried it before.

The bright flavors of peppery arugula, the anise accent of fennel, and the tangy sweetness of oranges come together in this vibrant winter salad. You can make the vinaigrette and prepare the fennel and oranges ahead of time and refrigerate. Combine all the elements just before serving.–Lou Seibert Pappas

The sturdiness of this starter’s simple components make it especially superb during coolish weather, especially those transitional seasons when your cravings veer toward something sort of salady yet still slightly substantial. This lovely little recipe is just the thing for those moments, as it’s able to stand up to a robust winter braise and also serve as a solo lunch (for that, we like to embellish it with a little round of goat cheese). 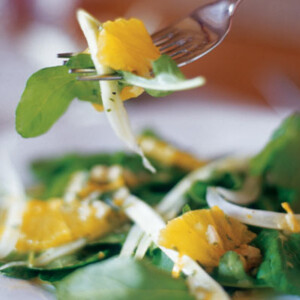 Arugula, fennel, and orange make a brilliant combination for a salad that works well any time of year–with robust stews or even as a leisurely summer lunch.
Lou Seibert Pappas
Prep 20 mins
Total 20 mins
Salad
American
8 to 10 servings
107 kcal
4 from 1 vote
Print Recipe 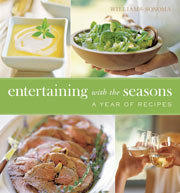 For the citrus vinaigrette

For the arugula, fennel and orange salad

This recipe is as simple as it is flavorful, and makes a refreshing addition to any meal. It allows fennel and orange to do what they do best, which is to love one another without a lot of interference. The dressing is light and well-balanced, and the Dijon mustard gives it a nice edge. That said, there’s no way I’d use all of the dressing that the recipe calls for, as it would drench everything. Using half was more than sufficient. Also, if you slice the oranges as the recipe instructs, you end up with lots of webbing (or whatever the connective bits between the segments are called). So after cutting the orange crosswise as directed, I sliced each half into thin rounds, and then bisected the rounds into half-moons. Serving suggestions seem pretty accurate. If I were to change anything, it would be to add a salty element, such as sliced black olives, shaved Parmesan, or ricotta salata. A handful of toasted hazelnuts would also lend more punch.

I absolutely love this recipe. I was going to give it a 9, but after making it for three days in a row—and wanting to make it again today—I’d say that it deserves a 10. This salad is so refreshing—it would make a great palate cleanser between an appetizer and main course, or even after a heavy main course. It actually made a great main course one night when we were tired, hot, hungry, and didn’t want to cook. Instead of cutting the oranges into half-moons, I sectioned them, and cut the sections into chunks that I tossed with the fennel and arugula. TIPS: When you have so few ingredients in a recipe, they really need to shine, so buy good fennel, arugula, and oranges. Also, be sure to drink up all of the delicious juices left in the bottom of the bowl after you’ve finished eating your salad. (You may not want to do that in front of company, though.)

Easy and delicious—the perfect way to enjoy the last of winter’s oranges. The one thing I’d change about this recipe is the method of cutting the orange segments. I don’t like the stringiness of the orange slices, as it doesn’t add anything to the salad. Using the peler à vif method would be much better: use a knife to shave the orange’s peel and pith, and section the slices between their membranes.

I was drawn to this recipe for two reasons. First, I thought the dressing would be lighter than most due to the ratio of citrus juice to oil. This proved to be the case. The citrus flavor was perfect for the tangy arugula and the sweet fennel and oranges. The second reason I tried this recipe was that I thought it would be beautiful, what with the dark greens, white fennel, and bright orange segments. My only complaint (and it’s not really a complaint) is that the amount of dressing was far too much for the 4 cups of arugula. The opportunity this presents, however, is to have this salad again.

I took this salad to friend’s house this past weekend. Everyone raved about it. We loved the zesty orange paired with the bitter spinach. It was just wonderful—very fresh and exquisite. A must-try, and often.