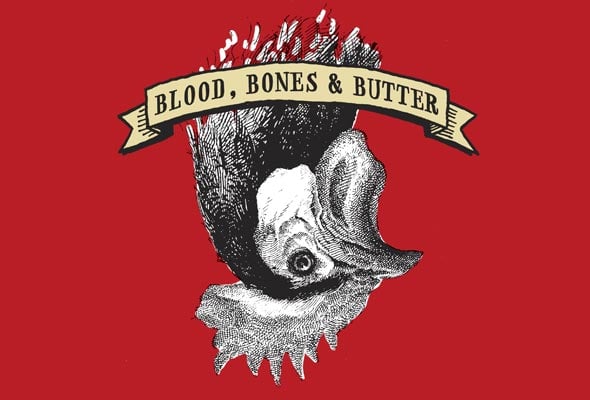 Pull up a chair. Grab yourself a knife, a fork, and a—book? Yes! At Leite’s Culinaria, we aim to feed not just your body but also your mind, spirit, and sense of community. That’s why we’re launching the new online LC Book Club. Think of it as having a “Literary Lunch Break” with friends, rather than all by your lonesome. The first title for the Book Club? Gabrielle Hamilton’s much-hyped memoir, Blood, Bones & Butter: The Inadvertent Education of a Reluctant Chef (Random House, 2011).

Our Book Club discussion will take place starting Saturday, April 23, 2011, so you’ve got plenty of time to start reading. We’ll host the conversation over on our Twitter stream @LeitesCulinaria, using the hashtag #LCBookClub to unite readers in what we’re sure will be a spirited conversation about Hamilton’s memoir.

Of course, we’ll also field comments here, for those who either don’t have a Twitter account, or who would like to discuss the book in thoughts longer than 140 characters. If you plan on participating in the book club (here or on Twitter), or if you have thoughts to share about the Book Club in general, please take a moment to introduce yourself in the comments section below—we’d love to hear from you.

Finally: Participation counts. We’re happy to announce that a $100 certificate toward a meal at Prune, Hamilton’s NYC restaurant, will be given away at the end to one lucky (and active) participant; it’s our way of saying “Welcome to the (Book) Club!”

Not only did Hamilton’s sharply observed memoir earn a starred review from Publisher’s Weekly, but Anthony Bourdain has gone on record saying that Blood, Bones & Butter “is, quite simply, the far-and-away best chef or food-genre memoir…ever. EVER,” and that it “kicked the hell out of my Kitchen Confidential.”

Enchanted and strange, inspiring and tough-as-nails, the book reveals Hamilton’s unconventional journey from being a somewhat lawless adolescent child of divorce in rural Pennsylvania to her opening of Prune, the incredibly successful restaurant she established in 1999 in New York City’s East Village.

In Blood, Bones & Butter, you’ll meet a French mother who cooked “tails, claws, and marrow-filled bones” in high heels, a father who built sets for the circus, and then follow Hamilton’s own various incarnations as waitress, freelance caterer, camp cook, graduate student, and restaurant entrepreneur. All with tightly crafted prose, the heat of the kitchen, and more than a pinch of emotional honesty.

Entertaining? Yes. But also food for deeper thought. We hope you’ll join our Book Club on April 23 and share your views of Hamilton’s memoir.

In the meantime, if you’re hungry for more, chow down on Gabrielle’s Brown Butter Pasta recipe or take a look at these Literary Lunch Break writings:
© 2011 Allison Parker. All rights reserved. All materials used with permission.