The artichokes in this recipe are split in half lengthwise, stuffed with ground meat, and then cooked. Medias appeared in Aleppo courtesy of Spanish Jews who arrived in the Ottoman lands after Ferdinand and Isabella’s Edict of Expulsion. The word media is Spanish for “half.”–Poopa Dweck

LC Sauce on the Side? Note

If, like at least one of us, you’re rather picky and sometimes prefer your sauce on the side, simply sweat the stuffed artichokes unsauced in the Dutch oven, adding a few more drops water as necessary, and simmer the tomato sauce in a separate skillet for the requisite time. It’s as simple as that. 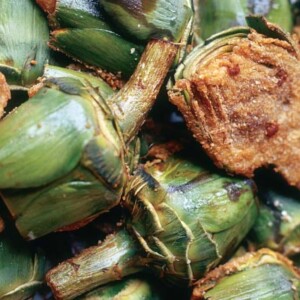 The artichokes in this recipe are split in half lengthwise, stuffed with ground meat, and then cooked.
Prep 45 mins
Cook 30 mins
Total 1 hr 15 mins
Sides
Spanish
8 to 10 servings
532 kcal
5 / 2 votes
Print Recipe 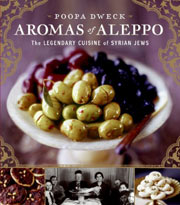 For the beef filling

Make the ground beef filling and stuff the artichokes

Well, this was a surprise. It was quite good, very easy to prepare, and would make a good side dish. It took a bit longer than expected to cook the beef, but after that time, the artichokes were perfectly tender. The lemon juice adds a real zing to the tomato sauce. My husband, who’s a food snob, said that he would want to eat it again.

I’m a big fan of Aromas of Aleppo, and I’ve made this recipe twice, both times serving them alongside a roast chicken, rice, and a salad. The first time I made them, I used halved fresh artichokes, and they were delicious—my tasters loved them. The second time around, I used frozen artichoke hearts, halved the sauce, and substituted the beef for ground turkey. These were also delicious, and much quicker to make. (Using frozen artichoke hearts is also a great way to make this dish when artichokes aren’t in season.) One pound of ground turkey filled about 15 hearts. Though I forgot to time exactly how long it took to bake the frozen ones, it was somewhere between 10 and 15 minutes. It only took four people to eat all 15 of them! They’re truly little jewels.