Twice-baked potatoes with pancetta stuffing are an upgrade on the classic–with sour cream, blue cheese, and pancetta. But that’s not all…we have lots of other options for you, too. Did we mention that these are fab for parties?

All three of us grew up with this favorite of the 1950s—a baked potato with the filling scraped out, mixed with sour cream and spices, and then restuffed back into the potato shell. What we love most about these potatoes is that they can be made entirely ahead of time (making them classic party food) and reheated just before serving. And the ideas for flavor variations are endless.–Jonathan King, Jim Stott, and Kathy Gunst

What’s better than finding an old favorite recipe, revived and ready for action? Why, finding that recipe has a score of ways for you to pimp it up, that’s what. These twice-baked potatoes are swell just the way they are with sour cream, blue cheese, and pancetta, but take a peek lower down on the page and you’ll see that there’s no limit when it comes to mix-ins and swap-outs. Go ahead and find your own way to pimp your potato and let us know in a comment below. 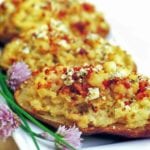 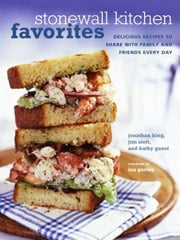 This dish struck a great balance between the saltiness of the pancetta, the tang of the sour cream and buttermilk (which I substituted for the milk), and the richness of the blue cheese. All this in one simple dish! I also added sauteed garlic scapes (several add-ins were listed below the recipe, including garlic) as well as cheddar. Both my husband and I liked the flavors a lot. It was not a blow-your-socks-off dish, but was very good. This would be yummy with Parmesan or goat cheese instead of the blue cheese (yet another variation listed). This sort of felt retro in a fun way. I made extra to freeze.