These Mediterranean-style stuffed chicken breasts, which are filled with a mixture of cream cheese, bacon, bread crumbs, almonds, olives, and thyme, are an easy, healthy-ish main that’s simple enough for a weeknight, but still feel (and taste!) quite special.

We know what you’re thinking. “Stuffed chicken? How very…’80s.” Perhaps. And ’70s. And ’60s. And ’50s. Because as with most classics, this technique has wended in and out of favor throughout the decades. Yet its popularity persists, which is precisely why it’s a classic. That and because it works–to great effect. And if you covet those colorful and ridiculously healthy sides, just toss some vegetables—pretty much any veggie will do, though this photo happens to have captured an autumn moment wherein vibrant sweet potatoes and purple cauliflower were in season and plentiful—with a little olive oil and roast in a hot oven (425ish°F or so) until barely tender, maybe 12 minutes for young summery things, upwards for sturdier, cooler-weather items.–Renee Schettler Rossi 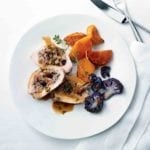 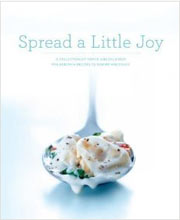 Love the look? Click to bring the LC Lifestyle into your home. Hemisphere Porcelain Dinner Plate by JL Coquet

Chicken breasts usually aren’t my protein of choice, but this dish will be a repeat offender on my table. I loved how the chicken turned out—it was unbelievably moist. The crunchiness of the bacon and crushed almonds really made the stuffing pop.

Searing and baking the chicken at first seemed a little much, but it’s not. The chicken came out beautifully golden brown, and it smelled amazing. A couple of things to watch out for: Taste the bacon before you add salt and pepper to the chicken, to make sure you’re not oversalting the bird. It’s better to salt at the end. Also, do use low-sodium chicken broth (homemade is fine). Though the stuffing is more than enough for six chicken breasts, don’t worry, there won’t be any left!

This is a very easy recipe. The stuffed chicken is very impressive and tasty. The filling was a nice blend of creamy and crunchy with a little smokiness from the bacon and brininess from the olives.

The pan sauce was quite thin so I added a little Wondra flour to thicken it. It didn’t make very much sauce (about 2 tablespoons), so I suggest doubling the amount of wine and broth to deglaze. This will make just enough to nicely coat the chicken breasts.

This recipe was easy to prepare, even with having to cut a small pocket in each chicken breast half. If you’re careful, this step is not that hard—but just as the recipe says, don’t cut all the way through. Everything else is a breeze.

Even though I forgot to cover the chicken while in the oven, it still cooked in the 30-minute timeframe. I did let the breasts rest for about 10 minutes before slicing, so the cheese mixture wouldn’t ooze out, then I topped it all with the pan sauce. I seasoned the breasts with a little salt and pepper before frying, but you need very little salt since there’s plenty of it in the olives and bacon.

The filling has a great mixture of flavors, from the crunchy, smoky bacon, to the briny olives, creamy cheese, nutty almonds, and flavorful thyme. We served ours with some roasted asparagus and a simple risotto.

Delicious! This dish was easy to prepare in both ease of recipe and time in preparation. (TIP: Cut a pocket in the chicken while it’s still a little frozen—it makes slicing the chicken much easier.) The stuffing is delicious; I loved the almond.

I also added half of a small, diced onion to my stuffing mixture—I’m glad I did, although it would’ve been equally delicious without it. When my chicken came out of the oven, I drained the dish juices to the pan sauce, and finished reducing the sauce. This dish is delicious and elegant enough that I wouldn’t think twice about serving it for a dinner party. I served it with parsley potatoes and buttered corn.

We’ll definitely make this dish again. I give it a full five stars and highly recommend making it.

In our household, we all fight for dark meat chicken because we rarely have had chicken breasts that didn’t turn out dry. This recipe works wonderfully as written, turning out chicken that’s very tasty and juicy. I used the bacon grease instead of olive oil to sauté the chicken. Next time, I’ll make less of the filling, as we all agreed a little bit goes a long way. We’ll also try adding some raisins, as I believe a little sweetness in the filling would work very well.

This was a good, easy-to-follow recipe. The sauce wasn’t as flavorful as I thought it would be, and seemed lacking, but the filling was very good. When cooking the chicken, I used a grill pan for added texture and aesthetics. I had some filling left over, so I scooped the remainder and set it in the middle of the baking pan and baked it alongside the chicken breasts.

I served the extra filling on the side. My bake time was about 20 minutes and the chicken was moist and not overdone.

This recipe was much easier to put together than I expected. I only had one problem with it, and that was the size of the chicken breasts. I thought there would be too much stuffing, but overall it was a very nice ratio of chicken to stuffing.

Our chicken took 45 minutes to cook, but this was due to the chicken breasts being larger than the recipe stated. I had to more than double the recipe to feed my guests, but it was worth it, as even the 5-year-old asked if we could have this again.

I like this recipe, and I’d make this dish again. The chicken was perfectly done and looked good when sliced as the bread crumbs and egg stabilized the filling nicely and kept it from oozing out. With kalamata olives and crunchy almonds, the chicken had a lot going on. The subtly flavored sauce was perfect.