Yucatan-style slow-roasted pork is intensely flavored and, thanks to the addition of annatto seeds, it’s just as brilliantly visually appealing. A spice rub that includes cumin, garlic, paprika, orange, beer, allspice, and ancho chili coats a slab of pork shoulder, which gets slow-cooked until fall-apart tender.

Of all the recipes in the cookbook I cowrote with Boston chef Andy Husbands, The Fearless Chef, the one for slow-roasted pork is the one I’m asked for the most. Sometimes I serve it simply, with salsa, sour cream, and tortillas on the side, but trust me, this meat can go into all sorts of recipes, including Cochinita Pibil Tacos, AKA pulled pork tacos.

I’ve simplified this recipe a little from Andy’s original version, cutting out a 24-hour marinating step, replacing the traditional banana leaves with good old aluminum foil, and using one of my favorite smoke stand-ins, Spanish pimentón (smoked Spanish paprika), instead of oregano. The pork is spicy and deeply flavored and colored, thanks in no small part to the large quantity of annatto seeds (also called achiote) that goes into the paste. (These little brick-colored pebbles are worth seeking out at good Latin markets or online through such sources as Penzeys.com.)–Joe Yonan

Too lazy or hungry to hold out for finding annatto before making this slow-roasted pork recipe? That didn’t stop some of us from turning out a still quite South-of-the-border-inflected pulled pork, even sans the traditional ingredient. We heard no complaints. 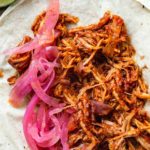 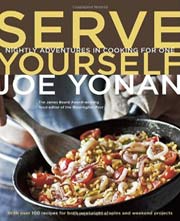 This recipe delivers fork-tender pork that’s full of flavours that, at least to me, are unusual and exciting. It’s easy to put together, and is very low-maintenance— once it’s in the oven, it doesn’t need any interference, and once it comes out it’s so easy to shred that it takes only minutes. I’d point out that the pork is very strongly flavoured, and has a slightly bitter edge to it, so pair it with something that will complement this and you’re on to a winner.

I love Sunday dinners like this one. Put a spice-rubbed hunk of meat in the oven for the day while doing other things around the house, and finish the day with a fabulous meal that takes very little effort. The meat came out exactly as promised: lusciously tender.

With so much pepper in the rub, I thought the meat might be spicy, but it wasn’t at all, and it went very nicely with the heat of the habanero salsa. Based on the fumes coming from my food processor, I was concerned about whether we’d actually be able to eat the salsa, but the citrusy flavor of the lime juice and the mellowness of the scallions balanced the heat perfectly. For those who are more sensitive to spicy foods, we found that a small dollop of sour cream and a few slices of guacamole helped temper the heat. We loved this meal and would definitely make it again.

The pork was so moist and tender, and the cooking method was perfect for a lazy Sunday afternoon. I might cut down on the annatto seeds next time, and add more chili powder or cumin seed, but otherwise, I was quite happy with the outcome of the recipe.

This is a spicy one, but we loved it! We decided to serve it with Amish egg noodles, and it was a perfect choice. I had to be careful and not add too much of the sauce for my daughters, due to its spiciness. The pork was fantastic, though—very aromatic, moist, and tasty. Cannot wait to eat the rest in sandwiches tomorrow. This recipe will be one to repeat. Very easy to make, and the house smelled wonderfully throughout the day.

I used the annatto seeds and prepared the spice paste exactly as written in the recipe. It smelled amazing. Sadly, I realized that I didn’t have the 4-5 hours for the pork to cook, so I cooked it at 285°F for the first hour, 290°F for the second hour, 300°F for the third hour, and 290°F for the fourth hour. (Thanks to fellow L.C. tester Beth for the advice!)

I took it out and ended up slicing it into pieces, as it wasn’t soft enough to tear apart with a fork. The meat was still pink, very tender, and absolutely delicious. I’m excited to make this again in a slow cooker so that I can shred it and make tacos. Very flavorful recipe and a total crowd pleaser. Highly recommended!

This is chock-full of flavor! The ingredients are amazing; they really pop out and sing. The annatto seeds should be mandatory instead of optional—they’re an important part of this recipe. At first, I thought that there was too much of the paste for a three-pound piece of pork. But do use it all—after the pork is done, and you’ll shred the meat and mix it with all of that paste.

After it rested for 30 minutes, I transferred the pork to a large platter, separating the pork from the drippings, and shredded it. I served the pork and the drippings/sauce separately, so we could add as much or as little as we wanted for our tacos. After reading about Pibil, I made marinated purple onions to have with the tacos. The onion was amazing with the pork. These tacos will make it difficult for local tacos to compete in any way.

I chose to make this recipe because I wanted to use it for the Cochinita Pibil Tacos with Habanero Salsa. I like the intense flavor that all the spices, cilantro, and orange gave to the meat. It gave off amazing smells while it was roasting in the oven. I did take a couple of bites when it came out of the oven, and even though it was good, it was better the next day. I think this recipe is even better after being given time for the flavors to marry with some of the cooking juices.

I saved some of the juices in case I needed them when I reheated the meat for the tacos, and this came in handy. I used a bone-in picnic shoulder and it weighed a little more than the 3 pounds called for. It took 5 hours to cook. I like the fact that this can’t be overcooked, since you want it to be falling apart tender.

This will be one of the best pork recipes you’ll ever make. I decided to double the recipe, as I wanted to know if marinating the meat overnight with the seasoning would make a difference. It did. Both roasts were delicious, but the one that sat seasoned overnight in the fridge was more flavourful and tender.

I cooked them for 5 hours, and the meat was very juicy. I used the pork to make the Cochinita Pibil Tacos with Habanero Salsa. I’d definitely make this one again for a crowd. Easy and delicious!

This was fantastic from start to finish. The pork came together easily and made the whole office smell amazing (we have a full catering kitchen at work, so I brought this in and made it for my co-workers). I was a bit nervous handling the habanero, but made it through unscathed.

The recipe for the salsa works as written, and even though I had a harder time roasting the garlic over the open flame of a gas burner (kept slipping from tongs), it made sense to me and worked perfectly. The recipe makes four tacos (you’ll likely have extra salsa since a little goes a long way), but 1/4 cup of pork per tortilla was about right. Definitely not 4 servings, though: most of my friends ate at least two tacos. This is definitely a keeper.