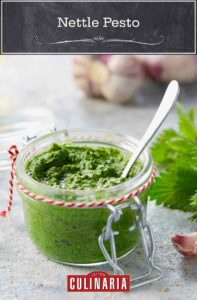 This nettle pesto, made with nettles, pecans, olive oil, and pesto and served over pasta, is a classic spring dish. 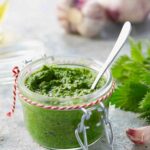 Though their flavor is often compared to spinach, nettles have a thickness and texture that makes them a better candidate for use in the kind of coarse pesto that clings to pasta. Spread any leftover pesto on sandwiches, swirl it into aïoli as a dip for artichoke leaves, or thin it with additional olive oil and use it as a pizza sauce.
Prep 25 mins
Cook 20 mins
Total 25 mins
Mains
American
4 servings
867 kcal
5 from 1 vote
Print Recipe

For the nettle pesto

For quick nut-swap, try toasted walnuts instead of toasted pecans.

For a spicy nettle pesto, sauté 1/2 teaspoon crushed red pepper flakes in 1 tablespoon of the olive oil, until fragrant. Cool, then add to the pesto with the rest of the oil.