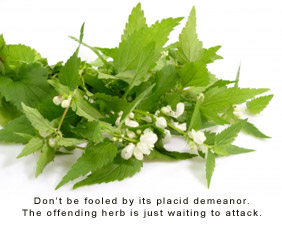 Though their flavor is often compared to spinach, nettles have a thickness and texture that makes them a better candidate for use in the kind of coarse pesto that clings to pasta. Spread any leftover pesto on sandwiches, swirl it into aïoli as a dip for artichoke leaves, or thin it with additional olive oil and use it as a pizza sauce.–Jess Thomson

Got nettles? If it’s not spring, then chances are you don’t. And if it is spring, then watch out, cuz they’re not known as “stinging nettles” for nothing. The prickly leaves are quite protective of their high mineral content, protecting it with barbed edges and an irritating chemical. The author notes to simply dump the bag of nettles into the pot of boiling water. That’s presuming you’re buying the nettles come spring from a farmers’ market. It’s the safe approach. We encourage it. Strongly.

Bring a large pot of salted water to a simmer for the nettles. Add the nettles directly from their bag and cook, stirring continuously, for 2 minutes. Dump into a colander to drain. When the nettles are cool enough to handle, wrap them in a clean dishtowel and wring out as much moisture as possible. You’ll have about 1 cup of cooked, squished nettles.

Pulse the garlic, pecans, salt, and a few grindings of pepper in a food processor until finely chopped. Add the nettles, breaking them up as you go, and the lemon juice and whirl until the nettles are finely chopped. With the machine running, add the olive oil in a slow, steady stream through the feed tube. Add the cheese, pulse a few times, and season to taste with additional salt, pepper, and lemon juice, if needed.

Cook the pasta according to the package directions. Meanwhile, heat a small skillet over medium-high heat. Add the breadcrumbs and toast for a minute or two, stirring frequently, until the crumbs are golden brown. Transfer to a small bowl.

When the pasta is done, reserve a cupful of the cooking water and then drain the pasta. Return the pasta to the pot and mix with a heaping 1/2 cup nettle pesto and about 1/4 cup (more or less) pasta water. Stir in the breadcrumbs and the 2 tablespoons Parmesan. Serve immediately, sprinkled with additional Parmesan.