Easy rhubarb jam is exactly that. Easy. Made from just rhubarb, sugar, lemon, water and a little stirring, it makes simple, pretty, and perfect preserves that taste just like old-fashioned jam. No prior canning experience required. Here’s how to make it at home.

This easy rhubarb jam perplexes us in the best possible way. It tastes far lovelier than you’d expect given that it’s derived from a funky looking plant with gangly stalks and floppy leaves. It’s also ridiculously easy to make—more so than we’d ever fathomed. The old-fashioned and pretty preserves call for a mere four ingredients and an occasional stir. And, thanks to its carefully worded instructions, it’s pretty much foolproof. Which is a godsend. And, lucky you, means there’s no prior canning experience required.

So if you’re tempted—or at least curious—about putting up your own preserves then, dear reader, then this is the recipe for you. [Editor’s Note: That said, canning beginners, you may want to take a peek below at the Canning 101 below the recipe, which includes even more of the author’s simple and carefully explained techniques, tactics, and tricks. More experienced canners, you won’t want to miss this, either, as you never know what you may learn.]–Renee Schettler 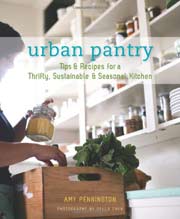 This was delicious jam. It was tart and sweet with a good consistency. It came together quickly and easily, and the longest part of the process was waiting for the rhubarb to macerate with the sugar.

I worried that the jam wouldn’t set up well, but it was fine. The recipe also scales down very well, as I made only a quarter of it without any problems. I also didn’t can it, but instead made a “refrigerator” jam that I ate within a week. It was delicious on biscuits—and made one of the best peanut butter and jelly sandwiches I’ve ever had.

There is such beautiful color, tart flavor, and a hint of lemon in this easy rhubarb jam recipe.

I cut the recipe in half for a smaller portion of jam, and was quite happy with the results. The jam set up easily on the frozen plate.

The rhubarb jam worked very well, even though I made only a quarter of the amount. My only variation from the recipe was that after mixing all of the ingredients, I didn’t have a chance to cook it immediately, so the mixture was left on the stove overnight.

Personally, I found this to be a very sweet jam. Later I used 1 pound of rhubarb with 3/4 cup sugar. This was a better ratio, but I’d still like to adjust the sugar so that the sour and sweet tastes are in just the correct balance.

I must confess, I didn’t go through all of the canning steps for this recipe. I’m storing it in the fridge because I don’t expect it to last long. I love the addition of the lemon. I even snacked on the “candied” lemon peels after I fished them out of the jam.