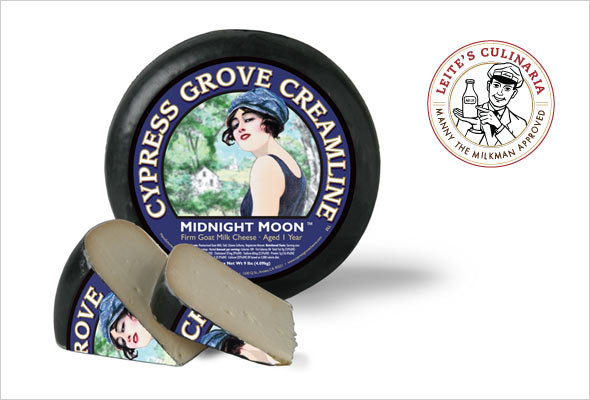 Recently, I brought some Cypress Grove Midnight Moon goat gouda to a dinner party filled will some pretty highbrow foodies.

I’m intimidated by foodies—serious ones, anyway. My partner Bruce and I live in rural New England. We don’t get out all that often. In these parts, the seasonal reopening of the Dairy Queen two towns over counts as a culinary happening. Yet I must know at least a little something about cheese, because those foodies fell on my goat gouda.

Many folks—including one of the heavyweight foodies at the party—are completely unaware there’s such a thing as goat gouda, given that the sweet, mild cheese is traditionally made entirely from cow’s milk. This particular incarnation is made by Cypress Grove, whose founder, Mary Keehn, is one of America’s preeminent cheese makers—she’s the genius behind Humboldt Fog. About a decade ago, Keehn took a trip to Holland and came across a gouda maker working according to traditional methods and strict local milk regulations. His exacting standards suited her, so she paired her recipe for goat’s cheese with his technique and set up shop abroad. (Keehn thought that such a proud Dutch tradition ought only be made in Holland, with goat milk from Holland, and with the ambient mold spores found in—you guessed it—Holland.)

Keehn produced a cheese that has a sweet, almost caramelized taste, with grassy, sassy, savory overtones. Goat milk adds umami, that indescribable fifth flavor, along with sour notes to the usual bovine equation. Forget chèvre. That stuff’s a sledgehammer compared to the delicate elegance of Midnight Moon. Typically paired with sweet condiments, such as fig jam, it also really stands up to a little heat, like a hot tomato chutney.

Having traveled the U.S. and Canada for more than a year to research our book on goat, I’ve visited a flotilla of cheese makers and can attest to the fact that much fresh goat cheese is pretty rough around the edges. But Midnight Moon resets anyone’s established expectations. And not just mine—the cheese won best in its class at the 2010 World Championship Cheese Contest. So consider introducing Midnight Moon to the foodies in your life. Trust me, they can’t be snarky when their mouths are full. —Mark Scarbrough