Elizabeth Stewart recounts her father’s cocktail of choice, pink gin, and his predilection for the good stuff (and we don’t disagree.) With a single ice cube or neat, we think you’ll enjoy this charming bevvie.

This is more or less the only piece of advice my father gave me. I’m not sure what might have ensued had I chosen to ignore it. Public drunkenness? Health problems? Foaming at the mouth delirium? It didn’t occur to me to drink gin for many years after receiving this piece of paternal wisdom—he laid it on me when I was about 15 years old—although when I did begin to partake, I always passed up the drugstore brands, no matter how strapped my state.

My English father had descended from a long line of seamen. As a Navy man, his drink of choice was a pink gin. Far from impugning the masculinity of its taster, the barely discernible “pink” in the drink—it always seemed a shade of orange to me—comes from Angostura bitters, an herbal concoction marketed by a German doctor in the late 1800s as a remedy for queasy stomachs. The namesake cocktail came to be when the aromatic bitters—also effective at countering seasickness—was adopted by the Royal Navy and added to the gin they took when the sun was over the yard-arm. Or before.

Dad’s method in making his cocktail was to swirl a few drops of Angostura around an old-fashioned glass, and then shake out any excess. He’d fill the glass with a couple of glugs of gin and a sliver of lemon peel. No ice—of course, no ice. We’re talking of a time (the 1950s) and place (Britain) where domestic refrigeration was rare. Since central heating was just as rare, there really was no problem, as it was every bit as cold inside as it was outside—possibly colder. The bitterness of the herbs, he’d once explained, offsets the oiliness of the gin, making for a palatable—indeed, what I’m told is a really nice—drink. It’s a drink to soothe and fortify, so long as the booze ain’t cheap. Father knows best.–Elizabeth Stewart

We’re all for authenticity—in most instances, anyways—although we’d rather take our Pink Gin on ice, thank you. One cube is all it needs, just enough to take the edge off those gin-bound botanicals. Blame it on our delicate American palates. 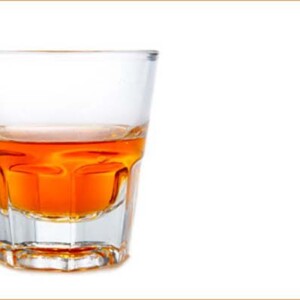 Pink gin comes from the addition of Angostura bitters to a classic gin with lemon. Add ice if you're so inclined.
Prep 5 mins
Total 5 mins
Drinks
British
1 serving
267 kcal
5 / 3 votes