Some Marinara Sauce With That Ear, Sir? 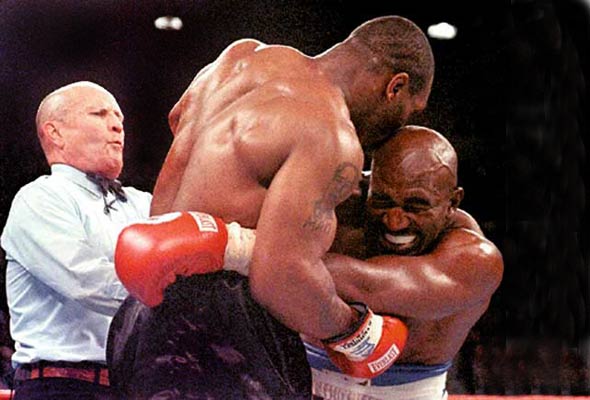 I’m convinced that dips, sauces, preserves, rubs, and the like not only make us hungry—okay, hungrier—but that they make the world go round. I dare you to find a french fry that’s not improved by a dunk in ketchup. A biscuit that couldn’t stand to benefit from a smear of Rhubarb Jam. A wedge of soft, warm lavash that could stand on its own, no Red Pepper-Pomegranate Molasses-and-Walnut Dip needed.

I have a sneaking suspicion that condiments play a similar role in Mike Tyson’s life, although I dare say his notion of a round generally involves gloves, jabs, and mouth guards.

Tyson faced off with Evander Holyfield on this day in 1997. We all recall the rather gruesome act that happened mid-match when Tyson took a nibble of Holyfield’s ear. My theory is that Iron Mike was provoked by his opponent. And by that, I don’t mean Holyfield muttered insults about Mike’s mother. It must have been something far sneakier on Holyfield’s part, impossible to resist. Like a smear of homemade Marinara Sauce with Fresh Basil behind his lobe. If that’s the case, Holyfield’s lucky it was just a chunk of ear he lost. Who knows how far things could have gone if Holyfield had slicked some spicy-sweet Chipotle-Maple Barbecue Sauce, say, behind his knee? And I’d rather not picture Holyfield’s fate in the event that Quito’s Butt Rub had been involved.

I’m certainly not ignoring the possibility that Tyson may have suffered from unbridled aggression, not hunger. And I have a proposed solution for that as well. For soothing the wild beast in all of us, I recommend an immodest dose of Hollandaise. Think about it. After that blissful, butter-induced stupor sets in, can you imagine yourself standing upright, let alone roughing up another person? Neither can I. Or, if there’s no time for that, then a quick homemade mayonnaise. What it lacks in butteriness it more than makes up for in soothing creaminess and that innocent white hue.

It’s too bad Tyson and Holyfield didn’t make it to the post-match cool down that day. It would’ve been nice if they could’ve shaken hands over a heaping bowl of vanilla ice cream swimming in Hot Chocolate Sauce.

Back to Some Marinara Sauce With That Ear, Sir? on Leite's Culinaria