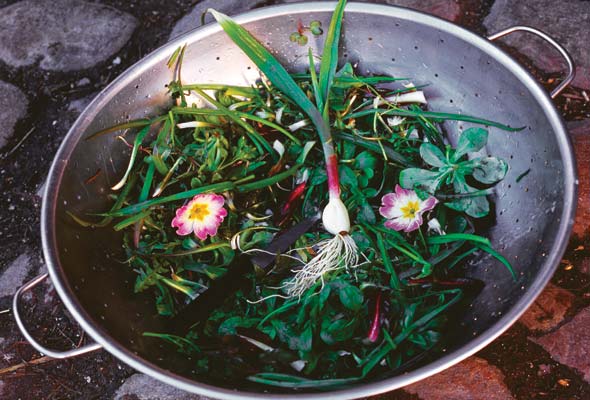 That’s how my brother’s wife, Connie, refers to salad greens. You sorta have to experience it firsthand to understand the emotion she conveys. Suffice it to say, she utters it in tandem with a toss of the head, a stomp of the foot, and an incredulousness that insinuates, “You don’t actually expect me to eat that, do you?!”

Whereas to me, nothing is so lovely as when those little green things are once again plentiful at the greenmarket come early summer. You can imagine how well she and I got along back in the early days of her and my brother’s courtship.

Thing is, Connie actually nailed it—the weeds part, not the disdain part. Warm-weather greens are often weeds, a hodgepodge of gangly and scruffy and floppy looking sprigs whose beauty lies in the eye of the beholder and whose flavors vary from bitter to sweet, nutty to lemony, surprising to just plain, you know, green.

Come early spring, the array of weeds changes fairly drastically from one week to the next, just as the displays vary from one greenmarket stand to the next. Sometimes the greens are bundled with rubber bands and plunked indelicately in crates, leaving market goers who want to know what they’re purchasing to guess or go make nice with the farmer. Other times the greens are fluffed and spritzed and nestled in pristine pillowcase-lined bins accompanied by charming handwritten signs explaining the Latin name, medicinal properties, tasting notes, and cooking techniques.

A sampling from the past few weeks…

Miner’s lettuce, also known as the far more elegant claytonia perfoliata. Nicknamed for the gold miners who subsisted on it in the mountains of California more than a century ago, it resembles lovely little lilypads the size of a button with a goofy little sprout coming out of the center. A mild-tasting, cool-weather plant, it’s a profuse, if ephemeral, spring delicacy. And it’s a sad, sad day when suddenly one day there are no more crates of it at market.

Chickweed, an oddly fluffy green that sort of resembles overgrown thyme. It has what The Wild Table aptly refers to as spade-shaped leaves and a taste that’s very, very green.

Mizuna seems rather bad-ass on first impression given its rugged, saw-toothed leaves. Its taste, though, is quite tame if picked when young, with just a faintly peppery smack.

Mache comes and goes throughout the salad seasons, its oversize roundish leaves in floppy little clusters. A mild and muted backdrop to more pronounced weeds, it’s nutty and just plain nice and versatile as heck.

Baby dandelion leaves look and sort of taste like broad blades of grass streaked with violet. Even if you don’t like mature dandelion greens, it doesn’t mean you won’t fancy these.

Spring onions may resemble scallions but they’re not at all the same. These are more curvaceous, with buxom bulbs and oversized greens. Though farmers always promise that they bear a less pronounced bite than standard scallions, that’s not always exactly true. White ones tend to be sweeter than the purplish red ones.

Fava greens are far more fetching than they sound, with a flavor that’s actually rather indescribable. If pressed to say, I’d describe them as more sweet than beany. And far less cumbersome than the pesky fava beans, which require you to shell them twice.

Salsify, or scorzonera, is typically harvested for its twig-like root. But jutting out of the top, just like that shock of hair sprouting from Bert’s head on Sesame Street, are sturdy, grassy, elongated leaves that are almost as mild as mache yet more similar to pansy leaves in taste and texture. (Oh, yes, you certainly can eat your pansies, so long as they’re not sprayed with pesticides.)

I could go on. Chrysanthemum. Nettles. Wild spinach. Those creepy, spidery little crimson things that are too mustardy for me. And more. At many stands, where the greens come already mixed, sometimes you’ll find an occasional sprig of chervil, with its licorice-like lilt. Or pea shoots, which lend a familiar sweetness to a hodgepodge that otherwise could be a little bitter.

And just when you try something and fall for it—maddeningly, dizzyingly, heartbreakingly fall for it—then it goes and disappears for a year. I’ve come to the conclusion that the only thing that’s certain from one week to the next come spring is that nothing’s really certain. Weeds don’t last long in another sense, too. Best to store them in a plastic bag that’s not crammed too full and left slightly open, with a paper towel slipped inside to soak up moisture. Just tuck it inside the fridge for a few hours or, if you must, for up to three days.

As for serving, I tend not to overthink things, simply tossing a mishmash of greens with a dribble of extra-virgin olive oil and a sprinkle of sea salt. Sometimes I bury eggs sunnyside up beneath a bunch of mixed baby greens. Or toss some sturdier leaves alongside a rib eye. Or ease a mishmash onto a plate alongside some take-out char-grilled chicken. Or balance a tangle of microgreens atop a bowl of pho and, come morning, toss the rest into an almond milk, banana, and honey smoothie. There are no rules…except that you can rely on them as a conversation starter at the table. Chances are it will be a pleasant conversation, although if my sister-in-law is in the house, there’s just no telling.