Skip to content
Home » Articles » He Said, She Said » Chocolate: Milk or Dark? 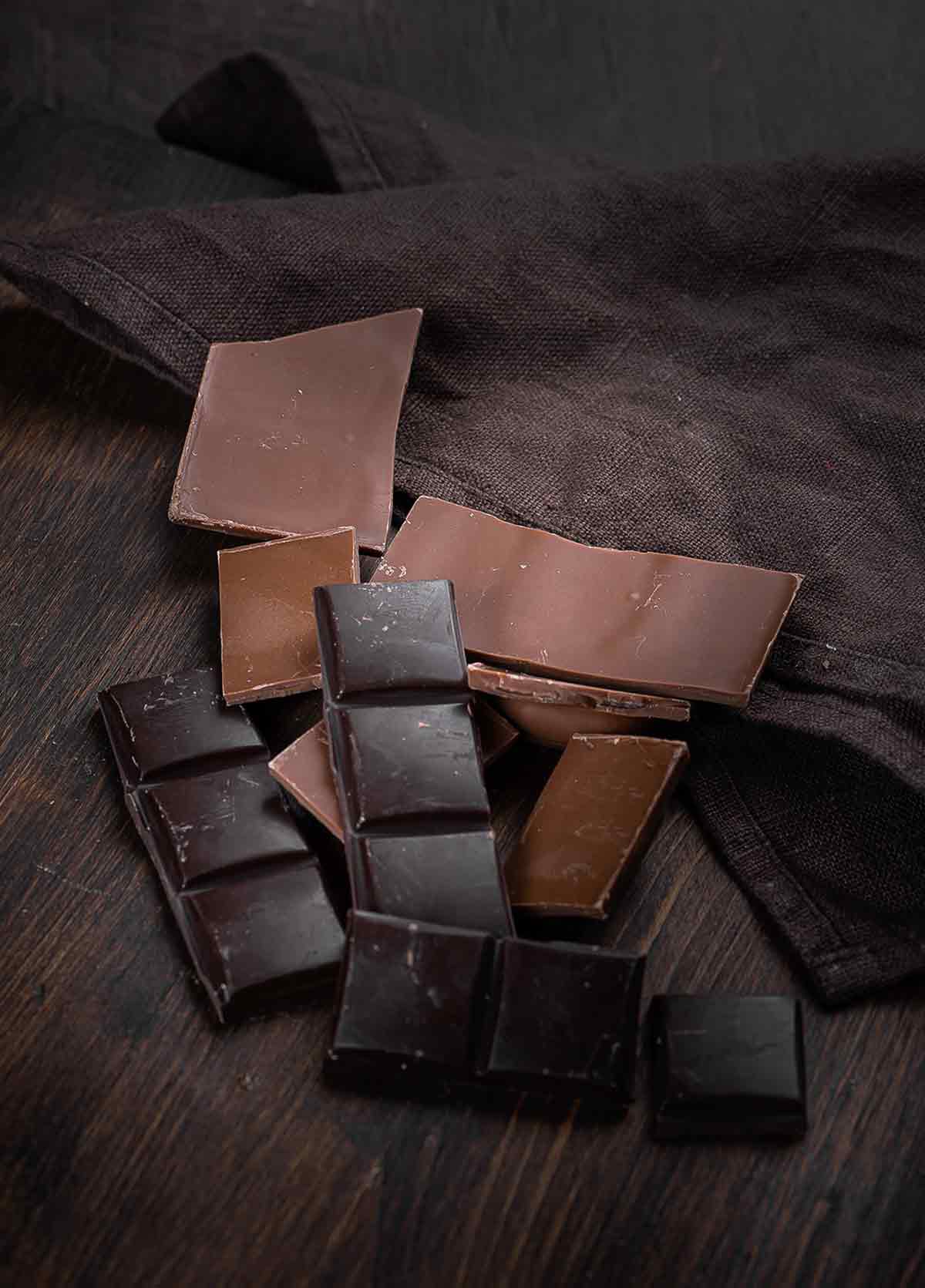 As many of you know, we sometimes celebrate national food holidays here at LC. Peanut butter, crabmeat, corned beef. The best so far, though: tequila. Boo-yah!

Then came the travesty that cleaved our virtual office in two: chocolate. Yesterday was National Milk Chocolate Day. Why Americans see fit to celebrate a blasphemy such as milk chocolate is beyond the pale and, frankly, beyond me.

Milk chocolate? Really America? Really PR people who tout these holidays? I’d rather celebrate National Dietary Fiber Day (Oh, wait there actually is one!) than bow and scrape to the contessa of the checkout counter.

Milk chocolate, with its saccharine personality and pallid complexion, is training wheels for children. It’s an indiscriminate infatuation that can, over time and with a deft parental hand, be nurtured into a healthy adult attraction to the joys and mysteries of dark chocolate. It’s like how my godfather got me to drink wine. When I was five or six, he planted me in one of his chrome kitchen chairs with the plastic seat that stuck to the back of my thighs and schooched me into place at the table. Then he poured an inch of red wine into a Flintstone’s jelly glass, topped it with a few fingers of water, and stirred in a goodly amount of sugar.

I feel sad when I see a grown man or woman jonesing for a milk chocolate bar or bypassing glassy mahogany domes in a chocolate box for the mocha-colored misfits. I have to restrain myself from initiating an intervention.

I must confess, I wasn’t always a dark chocolate fan. When The One and I met, I was a dyed-in-the-wool consumer of the lesser chocolate. He, an ardent admirer of the greater. At first, it was a match made in cacao-nib nirvana. Any box that came our way as host gifts or on birthdays or Christmas was neatly and equitably divided. But over the years, as he espoused the glories and advantages (including health benefits) of dark chocolate, I was slowly, irrevocably converted. He was my very own chocolate Darth Vader who ushered me trippingly and eternally over to the Dark Side, where I’ve been residing happily with face a-smudged for almost a decade.

To me, when chocolate has to be categorized by percentages is when things get interesting. The same way “What’s your sign?” is forever burned into our social psyche as the sexual pickup line of the 1960s, “What’s your percentage?” will be the dark chocolate lover’s mating call for the new century. Anything beneath 60% is sneered at and rebuffed in the dark circles of love. I’m comfortable with 65%, which translates on the dark scale as a Tempter. But The One, well, he can go all the way to 75% without getting that furry-tongue feeling from all that tannin. He’s a Master Seducer, a chocolate lover without equal in my book.

So infatuated is he with dark chocolate, and so determined to keep it from me, that he stashes his favorite bar—Lindt Excellence 70%—in the most unusual places: the bean shelf in the cupboard, behind the Tupperware, in his underwear drawer. And each and every time, I find it. You can’t hide food from Fatty Daddy.

Now that I’m forever addicted to the ecstasy of dark chocolate, don’t be surprised if in the future I stop in front of your house, open my car door, and try to lure your kid in with the promise of candy. There’s no shenanigans going on. I just want her soul, er, to save her soul.

My apathy toward dark chocolate began, as so many things do, as a kid.

I blame it on those little lopsided blobs that came tumbling helter skelter out of the crinkly plastic package and into the bowl of naked cookie dough or, more often, my mom’s waiting hand. Those nasty little semisweet morsels were invariably hazed with white—whether from the oppressively humid Iowa summers or some inexplicable dermatological condition known only to chocolate, I never knew.

What I did know was that beneath that iffy exterior lurked a taste that was, to me, vegetable, medicinal, entirely unpalatable. And let’s not even go near that not-so-nice waxy grittiness. Those darn chips tainted everything they touched: Cookies. Cakes. Brownies. Frosting. Me.

Whereas semisweet left me with questions, milk chocolate was a declaration. A lyrical, poetic statement of fact. It smoothed the lumps and bumps of 100 Grand bars. It caressed the peanut-y, nougat-y, caramel-y luxuriousness of Snickers bars. And it constituted the very ears, nose, and whiskers of my beloved Easter bunnies. Yes, it was a child’s chocolate. Yes, it was soothing in a way that life wasn’t always. And yes, I snuggled into its milky lap every chance I got.

As soon as I was old enough to bake—maybe around eight—I started nonchalantly tossing a bag or two of milk chocolate chips in our shopping cart when Mom wasn’t looking. And, when that didn’t work, I simply did without. Life is bitter enough, I figured. Why invite more bittersweet to settle upon my soul? I figured when I was an adult, I’d indulge in all the milk chocolate I wanted. But the stored-up anticipation never quite came to pass. At least not early in my twenties, when I came back to milk chocolate seeking consolation for bad bosses, dumb boys, and all manner of other disappointment only to find that the chocolate of my childhood was much, much sweeter than I’d recalled. I don’t mean those insipid gift boxes of cheap chocolates with cloying fillings that only debase the meaning of the word chocolate. (David, you disappoint me.) I mean milk chocolate straight up, at its simplest, unsullied by extraneous tastes.

I did try dark chocolate again. Yet it was still too…dark. And uppity, given its array of origins and types and percentages that people bandy about like so many badges of honor. (Yes, I’m talking about you, Fatty Daddy.) I can discern those fruity, peppery, espresso-y, ad nauseum notes just as well as the next pompous foodist, thank you very much. I just don’t go for them—the notes or the pompous foodists. So I did without. Again. And when good-natured folks offered me chocolate, I simply shrugged and said I’d lost my taste for it. And I thought I had.

As with David and his endlessly patient and classy The One, my salvation was my true love. When E came along, he exuded a sort of unabashed enthusiasm for boyishness. So it wasn’t exactly a surprise when I learned of his fondness for milk chocolate. I’m ashamed to admit that I sort of quietly smirked at this at the beginning, despite knowing he can discern practically imperceptible nuances between barrel-aged bourbons or dry-aged steaks. It wasn’t any milk chocolate that’d caught his fancy. Just one: Green & Black’s Organic Milk Chocolate. Almost every night he’d sheepishly slink off the couch to his stash of chocolate and bring it back and offer me some, and each time I’d smile and shake my head. But after witnessing his bliss at noshing on this pale brown chocolate over and over, I surprised both of us one night and broke off a small chunk of the bar. I stared at it. I sniffed at it. I cautiously nibbled at it. And then I broke off another chunk. And another. And another.

Twelve or so years later, he and I are still fiends for milk chocolate. That milk chocolate. No other. Except now most nights when he gets up from the couch and heads to the stash in the kitchen, I’m not certain whether the sheepishness is from needing his fix or knowing he needs to share it. Not that it matters. Milk chocolate has a tendency to fix all manner of things.

And you? Where does you chocolate freak flag fly? Milk or Dark?

Tell us below in the comments.