Skip to content
Home » Recipes » Portuguese Gratin of Shrimp and Spinach
Shares1.7kPinShareTweetYummlyShare on FlipboardEmailHeart this post
Jump to Recipe

This Portuguese gratin of shrimp and spinach might be less fussy than the original version, we think it tastes even better. Shrimp and spinach get layered with ham in a gorgeously creamy Port sauce. And don’t forget the melty, bubbly,, golden cheese on top.

This is a popular dish in and around the beautiful UNESCO town of Évora, in central Alentejo. A version is on the menus at Restaurante Tasquinha do Oliveira, A Bolota, and Herdade do Esporão. It even made a splash at Terreiro do Paço, in Lisbon, one of the city’s most elegant dining spots. This is the more casual cousin to the original.–David Leite

Spinach is a vegetable that keeps on giving—water that is. Squeeze it very well after cooling, or the dish will be adrift in a sea of khaki-colored liquid.

Portuguese Gratin of Shrimp and Spinach 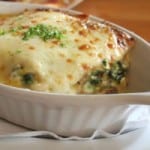 The unusual combination of shrimp, cured ham, and cheese–along with spinach, onion, Port, and garlic–intrigued me. Many say that pairing seafood and cheese in most applications is a no-no, but it works here. Make sure to squeeze out every molecule of water from the spinach, as this could otherwise spell disaster for the dish. I wrung my spinach out with a kitchen towel. The creaminess of this dish was what I liked best, along with the thick layer of melted Gruyere. The only thing I didn’t enjoy was the ham, though I realize it is a Portuguese combination. I would actually prefer it without and will try it that way next time. The Port was very subtle but it could be discerned, which was lovely.