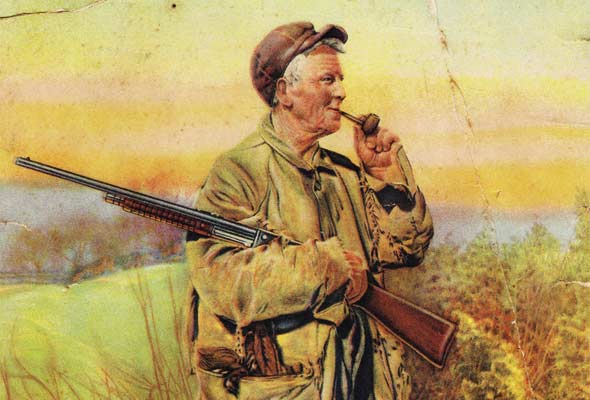 As we crept out into the predawn gloom, everyone was a little jumpy. Armed with shotguns and plenty of shells, about a dozen of us—all anxious, all nursing hangovers—fanned out in a huge arc around a sunflower field that was maybe three acres wide. We found our places, settling in among the corn stalks that loomed above us in the adjoining field, our eyes scanning the foggy skies for movement.

It was September 1, 2004. I was more nervous than most. Few of us had ever done this before. But all the other guys had years, even decades, of wingshooting experience, whereas I could count the number of times I’d shot at a flying bird on one hand. I could count the number of times I’d hit a flying bird on no hands. I was still new to hunting—and I was a terrible shot. To make things worse, we weren’t hunting just any birds. We were hunting doves.

Doves are notoriously hard to hit. They zig-zag like jet fighters and fly up to 60 miles per hour. But what made them most difficult to shoot, at least for those of us gathered in that muddy field in Minnesota that day, was the fact that dove hunting had been outlawed in the state for the past 62 years.

That morning marked the state’s first sanctioned dove season since 1946, which was when anti-hunting groups had contended—erroneously, yet successfully—that the common mourning dove is a songbird, not a game bird. The protestors had sealed their case by arguing that only African Americans, immigrants, and white trash hunted doves. No one standing in that sunflower field that morning had been much more than a toddler the last time it was legal to shoot doves in Minnesota, and only two of those gathered had hunted doves elsewhere—in any of the 40 other states where the sport had long been legal.

The first of September has marked the traditional start of the national hunting year for close to a century, and doves are almost always first up in the five-month parade of wild game seasons. In most places the dove season is short, often lasting only two weeks, and it’s not unusual for hunters to spend every morning before work or school—and every evening afterward—chasing doves. In the North, where doves spend only the summer, the hunt has always had little cultural significance. Throughout the South, Southwest, and much of California, though, where doves live all year long, the fervor for the annual dove hunt borders on religion.

So there we stood, waiting, fighting our way through our collective bourbon-induced haze, each of us eager to inaugurate what we hoped would become a new state tradition. That day had been a long time in the making, following a decades-long legislative battle. One of the old-timers with us that day had hunted doves as a boy in Tennessee. The previous evening, over a few too many glasses of bourbon, he’d told us about how much damn fun it was to shoot—and to eat—a mess of doves on a hot, late-summer day. He regaled us with tales about how fast they flew, how they’d make a fool out of even a champion skeet shooter, and how there’s no better bird on the grill.

Thoughts of grilled doves must have distracted me as the first little rocket-powered one zipped by, just before sunrise.

“Overhead,” someone hissed. I caught sight of feathers just in time to see a tail fading into the distance. No one, not even the Tennessean, had seen the bird in time for a shot. Seconds later, I heard the boom-boom-boom of another hunter emptying his shotgun at another dove that zoomed overhead. Three shells. No doves.

Shortly after, there was a cheer as someone finally brought down a dove. Followed by more missed attempts.

It went on that way for the next few hours. I flailed about wildly, burning through shell after shell and getting only a single decent shot off. It was on a dove that I should’ve killed but missed. Badly.

“You were behind it!” my friend shouted out, stating the obvious. It’s easy to underestimate the speed of a bird that flies so fast.

Soon the sun was high, the humidity even higher, and the hunt over. I was more than a little disappointed. Even prior to hearing the tall tales from the Tennessean, I’d been privy to all sorts of stories from other Southerners about epic dove shoots—and even more epic barbecues. I’d figured them to be fables, stories of the skies darkening with tens of thousands of doves, of shooting 15-bird limits in less than a half hour, of eating so many grilled doves they could barely walk.

I know, I know. The notion of eating little birds—especially mourning doves—can make some people wince. Isn’t the mourning dove the biblical bird of peace? (Nope, that’s the Middle Eastern turtledove.) Isn’t it a songbird? (Nope again. The common mourning dove, Zenaida macroura is not, biologically speaking, a songbird.) Why eat something so small? (What about oysters? Or shrimp?) People become attached to mourning doves because they see them all the time at their backyard feeders, and because—let’s face it—they’re cute. But with an estimated population of 350 million, doves are among the most numerous species of birds in North America, and even though hunters shoot close to 20 million a year, studies have shown that hunting has no effect on the health of their population.

Mourning doves aren’t the only doves we pursue. The legendary dove shoots in Southern California, Arizona, and Texas are largely fueled by Zenaida asiatica, a white-winged dove. And more recently there’s a particularly invasive, non-native species of dove, the Eurasian collared dove (Streptopelia decaocto), that’s begun breeding throughout the southern half of the nation. Hunters are encouraged to shoot as many of these alien birds as possible during the season.

For the more than one million dove hunters from California to North Carolina, this is a Labor Day tradition, and one I’d desperately wanted to be a part of. The reason I was so eager to eat a bird that, when plucked and dressed, weighs less than three ounces, has everything to do with squab. I was fortunate enough to grow up with parents who loved to eat at fine restaurants, so I experienced my first squab—that young, farm-raised pigeon that’s a staple in haute cuisine—before I was 10 years old. It was tantamount to the tenderest, juiciest filet mignon in the world—and it had crisp skin. To this day, decades later, I will almost always order squab if it’s on the menu.

Not only are doves cousins of pigeons, but they taste a lot like squab. Doves also tend to have shorter lifespans, typically less than a year, which ensures they’re exceptionally tender wild game. Tender, mild, and savory.

I never did get to eat dove on that first hunt in 2004. For those of us in Minnesota that day, it was still a strange new world.

Labor Day, 2008. I’d since moved to California’s great Central Valley, where dove hunting is woven into the rural region’s social fabric. I’d spent the intervening years honing my dove shooting and perfecting my dove cookery, and I’d been invited by a friend to cook at his annual dove hunt in Monterey County. It was by far the biggest hunt I’d been a part of. Before dawn, I and close to 50 other guys had stationed ourselves around this man’s 1,000-acre ranch. It was painted with doves. So this was what my Southern friends had been talking about! Flights of 50 to 60 doves coursed through the sky. The shooting was hot. By the end of the morning many of us had shot our 10-bird limit, and we had piles and piles of doves. I set the guys to plucking their birds, and they made short work of them. (Thankfully, dove feathers come off easier than those of any other game bird.)

Then I got the grill hot.

I have to think that the start of dove season, which coincides with the end of the traditional grilling season, was somehow ordained by Divine Providence. Doves, like other small birds (quail, squab, snipe, woodcock, etc.), need to be cooked over very high heat to crisp the skin while ensuring that the meat stays pretty and pink. (Yes, even quail should be cooked with a blush of pink to its breast.) Trick is, few ovens can go much higher than 500 degrees. This makes the grill an ideal tool for a mess of doves. (Non-hunters take heed: this applies to store-bought quail and squab, too.)

I’ve grilled pretty much everything that flies, runs, crawls, or swims, and there’s nothing quite like the aroma of doves roasting over hardwood, charcoal, or, truth be told, even propane. The combination of smoke, roasting meat, and something else—maybe it’s a tangy minerality from meat so fresh—is so enticing that almost all hunters grill their doves.

Most have but a single recipe: salt some boned dove breasts, rub half a jalapeno pepper over them, wrap in bacon, skewer with a toothpick, and grill until the bacon crisps. Variations include slathering cream cheese over the breasts, adding water chestnuts, or leaving the breasts on the bone, but they’re all pretty similar. And pretty damn good.

I invented a special dish that day, just for the occasion: Grilled Doves a La Mancha. Coat a whole dove with melted bacon fat, stuff a sage leaf and a rosemary spring inside, grill until it’s cooked to medium, then bring on the smoked paprika and black pepper. Awesome. Grown men found themselves making uncontrollable noises that sounded a lot like “yummy.” Guys who’d never thought about eating dainty little dove legs vowed to never again breast out their birds. A fight broke out over the last few doves. It was one of those heroic eating and drinking binges people tell stories about the night before Opening Day, just like the ones that old-timer from Tennessee regaled us with years before in Minnesota.

Before that day in Monterey, I’d never witnessed a “true” dove hunt. I’d shot doves here and there, but I’d never seen anything like this. That day made me a believer. And it hooked me on dove hunting forever.

This year, I’m hoping to add another chapter to my dove hunting story. I’ll finally get the chance to hunt in south Texas, where the white-winged dove reigns. This is the place where most of those crazy stories about shooting your limit in a half hour come from. Where barbecued dove on Labor Day is religion. I can’t wait. And I have my recipe ready.

© 2011 Hank Shaw. All rights reserved. All materials used with permission.

Back to Lovey Dovey: One Guys Passion for Dove Hunting on Leite's Culinaria