Skip to content
Home » Writings » He Said, She Said » TV Dinners: Grand or Gauche?
Shares959PinShareTweetYummlyShare on FlipboardEmailHeart this post

Are TV dinners exquisitely grand or disappointingly gauche? David and Renee share their experiences and opinions from childhood regarding the iconic American convenience meal. 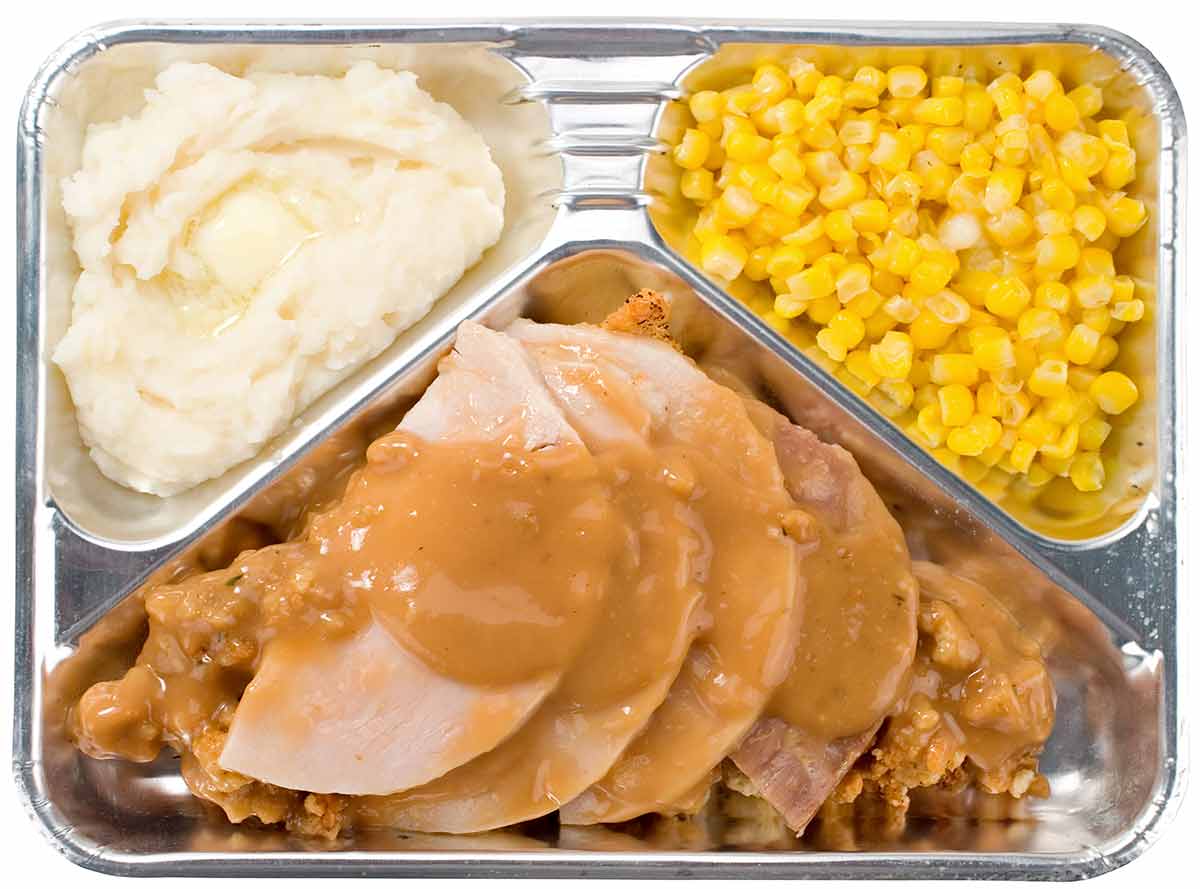 I sit at the counter, tracing the copper veins of the marble Formica, waiting. What’s it going to be today? I ask myself. My grandmother trundles over and slides a bowl thick with purple broth in front of me, then sits down with my mother, father, and me. I poke at the stew, and then I see them. Suction cups! Not just one, but a million. Rows and rows laid out like morse code sending a secret message.

“I can’t eat this!” I say, pushing away the octopus stew and leaving the table. “I just can’t.”

My mother points to my stool and gives me the vigneta look, the do-not-cross-me-now-young-man stare.”Sit,” she commands. I obey.

I push the chunks of demon food around my bowl, occasionally forcing some down in between huge, sloppy gulps of water. I shoot her some of my own vigneta looks, but I’m still in training, and they sluice off her like rain on a roof as she talks with my father.

And so it went every night: a parade of salt cod, my aunt’s blood sausage, my mother’s calf’s liver, my grandmother’s chicken necks. And my theatrics.

Growing up Portuguese in a time when the American ideal was Greg, Marcia, Peter, Jan, Bobby, and Cindy (Brady, of course), nothing in my world resembled theirs. And for years, I dreamt I was the seventh kid. Sure, we had low-slung Danish furniture in our living room and my mother wore shortish polyester dresses and shoes with chunky heels, but that’s where the similarity ended. Especially at the table. Until I was ten, it was a full-frontal assault of odd bits and bobs from every part of every kind of animal.

Then something happened. Something miraculous. Something utterly unexpected. My mother and I were shopping at Fernandes, where she worked as a courtesy booth girl. (This was in an era when someone in a supermarket actually smiled, asked after your husband, and helped you find the peas on sale.) I stood in front of the frozen food section pointing to Swanson’s TV dinners. I locked eyes with her and held my ground.

“No!” We both knew that all I had to do was make the slightest scene–in a place where she knew just about everyone by name–and, well, how courteous would that be?

“Fine,” she said. I won. I stood my ground and I won. From that day forward, I was allowed to eat my own food and could leave the awful offal behind.

And eat I did. I ate my way through just about every dinner Swanson’s made–turkey with stuffing, classic fried chicken, chopped beef–not to mention Hungry Man offerings, and a bizarre line of dinners that promised concerned mothers that their kids would get a full serving of vegetables. How? By making carrot fries and beet fries. I ate them all, ghastly orange and red fries included.

TV dinners were more than a tentative step of filial independence. They were my conduit to becoming an air-brushed, scrubbed-of-all-ethnicity American Me. They drew a line in the cultural sand and separated me from my Boston cousins and countless other children of immigrants who daily bowed over bowls of Old World frugality. They were my ticket into the closed circles of tow-headed kids I went to school with–the Ledouxes, the Fitzgeralds, the Hazels. They said, “Hey, I may be Portuguese, but you and me, we’re the same.”

The irony is I never once enjoyed my dinner in front of the TV, like my godmother did, eating her homemade French stuffing with one hand and smoking a Pall Mall in between bites with the other. My father insisted we eat at the table as a family. So while my parents and grandparents prattled on about parental concerns, I busied myself with emptying each precisely formed well of my tray. With each bite I imagined that I was the seventh Brady child, getting caught up in all kinds of shenanigans that ethnically neutered children do.

Are frozen TV dinners the paragon of culinary virtue and millennial food politics? Hardly. But for a few brief years in the early ’70s, they helped ease the pain of feeling different, ostracized, ignored. And all for 85 cents.

Know how when you were a little kid you somehow had to manage to behave yourself for the seeming eternity that was Sunday mass? I spent a lot of those church hours parachuting Fisher-Price people from the backs of pews into the hymnal holders. The rest of the time I spent silently pleading with the man upstairs to do something about my supper situation.

My mom didn’t care for cooking. Still doesn’t. Just was never her thing. Whereas in the morning she and I would giggle our way across the gold linoleum kitchen floor, waltzing to AM radio, come 4:00 p.m. she’d pace alone from cabinet to deep freeze to fridge and back again, lost in thought about what to make for dinner. Her demeanor changed, her laughter swayed to indecision, and much rumination and self-recrimination ensued. It was as if her entire being was consumed by the thought, “Oh god. Not again.”

Her coping strategy was a dented recipe tin containing handwritten cards yielding a small rotation of recipes, mostly casserole recipes. That and a deep-freeze she kept crammed full of butcher paper-wrapped bundles of ground beef. Most nights began with her tossing a pale pink brick of ground beef in a flowered casserole and cooking it over medium heat, impatiently scraping off the barely thawed bits as they browned, draining off the grease, and glopping in uncooked rice, canned tomatoes, cream of mushroom soup, and the like. The resulting creation was infallibly mushy and brown and aromatic in its own distinct way. Each of these is forever etched in my memory.

What complicated the cooking was the timing—or lack thereof. We never knew exactly when my dad would come in from the fields. So we’d wait. And wait. And wait. Mom would guess anew each night as to whether or when we ought to sit down to dinner without him, which didn’t exactly do much to remedy her mood…or her tendency to overcook things. At some point, we’d hear the door slam in the washroom off the kitchen where we kept the deep-freeze. While Dad stomped the dirt from his boots and scrubbed his hands with the gritty green soap that erased all trace of tractor grease, Mom would flurry to call my big brother to the table and I’d rush to clear any textbooks and homework papers, replacing them with a hot pad and a casserole dish before we’d all murmur grace and then fall into place. Dad would glower about soybean prices. Mom would gallantly pretend that everything was hunky dorey until Dad’s complaints wilted her to a seething silence. My big brother would tease me into misbehaving. And I would pout and push my casserole around on my plate, wishing instead for a hot dog. Or, even better, a real dog that would lick my plate clean beneath the table.

At some point my dad would boom, “Kids, you’re excused.” My brother and I would race outside to lose ourselves in chasing fireflies in the twilight, trying hard not to hear the no longer hushed emotions thrown back and forth across the table.

That was my supper situation.

One afternoon things were unusually quiet, the kitchen bereft of drama, even in the minutes leading up to dinner. That evening Mom slid Swanson’s TV dinners onto the kitchen table, flopping her favorite burnt orange and lime quilted hot pad in front of me and placing a steaming foil tray on top. At last, I thought, my Sunday prayers were answered…by what seemed a divinely inspired, albeit pathetically packaged, frozen dinner. I was giddy with my grand expectations—and not just for what lurked beneath that foil lid.

No amount of cold milk could squash the metallic twang that first Swanson’s left in my mouth. Although my biggest disappointment wasn’t what I found in the tray. It was the dynamics surrounding the TV dinner that I found most disheartening. I’d assumed anything that could circumvent my mom’s afternoon angst would change things. That my dad wouldn’t act like a stranger. That my mom would laugh like she did when it was just the two of us. That my brother wouldn’t be a brat. That my parents would make it through a meal without tense voices and heavy sighs. That I wouldn’t feel that rock in my stomach.

In retrospect, it wasn’t the frozen dinner that was at fault. The only one doing any deceiving that night was my naive five-year-old self, ascribing super-hero powers to a flimsy tray of pulverized potatoes and disappointingly cardboard-like fried chicken. Thinking that Swanson’s TV dinner was sufficient to fix what was wrong at our table was the culprit. Even a divinely inspired one. Originally published September 21, 2011.

How about you, dear reader? Do you love or loathe classic TV dinners?

Tell us about it below in the comments.