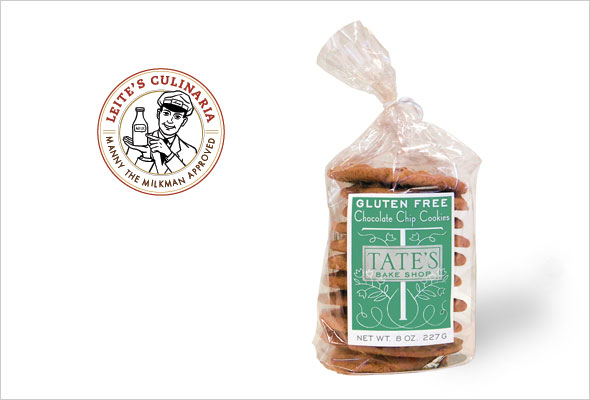 When I moved to Manhattan several years ago, I jotted down a laundry list of things to experience before I’d consider myself a proper New Yorker. Like the congee burbling away in ginormous woks big enough to bathe in down Chinatown way. The sedate satisfaction of sipping a cocktail while staring at Central Park from a settee at Per Se. The achingly tender beef cheek carbonnade at Resto that rendered ordinary folks hapless fools for pudgy bovine facial parts. Suffice it to say, the curiously ubiquitous cellophane bags of chocolate chip cookies, the ones with the lovely turquoise label and the word “Tate’s” in tall block letters, were toward the bottom of my list. They were, after all, packaged cookies.

Also a factor was the fact that I was encumbered with gluten intolerance, so it was, admittedly, something of a calculated procrastination. But after months of witnessing all manner of snitching from crumpled bags of Tate’s on the streets of the city, I finally caved. Feeling infallible one day, I took a nibble. And another. And then another. Until I’d inhaled three  squat, saucer-like cookies turned out by the little bake shop with the big following. Or was it four? Maybe more. Curiously crisp, the cookies shattered at the merest touch and didn’t so much melt in the mouth as disintegrate into a complex caramel essence of sorts that enveloped chunks of chocolate that melted oh so smoothly and slowly into nothingness. Sigh.

It was an intrepid indulgence, an arguably stupid splurge, and it had its consequences, impressing upon me not just an understanding of why New Yorkers hold their Tate’s close, but a lingering, lasting, all-consuming craving, one made all the stronger by the knowing that I ought not indulge.

So I waited impatiently for the day when I got the go-ahead to gorge on gluten again. And waited. And waited. I’m actually still waiting for that pronouncement. But I’m a lot less anxious about it now that the kind folks at Tate’s Bake Shop have given us a gluten-free version of their ridiculously indulgent cookies. Bless them, the Tate’s folks didn’t just make a gluten-free version of their chocolate chip cookies. They conjured a gluten-free replica of their chocolate chip cookies. They look the same. They crumble the same. They taste the same. Yet there remains that one crucial no-longer-double-over-in-pain distinction in which they’re not the same. And for that I’m unspeakably grateful.

I’m not the only one. When the gluten-free cookies were introduced at the Tate’s Bake Shop in the Hamptons earlier this year, folks nabbed them by the armloads, professing their gratitude as they rushed out the door to surprise husbands, kids, cousins, best friends, babysitters, and whomever else has had chocolate-chip cookies cruelly yanked away. Tate’s Bake Shop founder Kathleen King didn’t have to rely on fancy-sounding flours or chemical-tasting gums whose names she couldn’t pronounce (well, save for xanthum gum, but that’s in everything these days, it seems…plus it’s relatively easy to enunciate). She simply tied on her apron one day and tried swapping rice flour for all-purpose. That was it. Rarely is gluten-free alchemy achieved so simply, but given the original recipe’s penchant for squatness and flatness–traits that don’t necessitate gluten–King sort of lucked out. So did we, for that matter. So did we.

Tate’s Bake Shop Gluten-Free Chocolate Chip Cookies are $5.99 for a pack of a dozen or so heartbreakingly crisp cookies. They’re available at some Whole Foods Markets as well as at many specialty purveyors nationwide. If you don’t know where to look locally, you can email the kind folks at Tate’s and they’ll divulge the closest store. Or anticipate your cravings and buy in bulk at Tate’s Bake Shop online, where you’ll find a Sweet Six Pack of the cookies–a bargain at any price.