This recipe for a foolproof daiquiri is not only foolproof, but it’s the classic, true version of the original daiquiri. No strawberries, no ice cream, just rum, sugar, and fresh lime juice. Simple and sublime.

Adapted from John Mariani | Esquire’s Eat Like a Man | Chronicle, 2011

Since there are only about a half-dozen true bartenders left in the world, with the rest barely capable of making anything other than vodka martinis, I decided that the only way I’d ever get a classic daiquiri, straight up, was to have the recipe printed on the back of my business card so I could hand it to the person behind the bar who might otherwise make it with strawberries or bananas, on the rocks or frozen.

Ever since I had the cards done, with a picture of the cocktail glass I want it served in, I’ve been getting exactly the daiquiri named after the Cuban town of Daiquiri, where, after the Spanish-American War, Americans came to run the mines, spending off-hours drinking local rum with local lime juice and local sugar.

F. Scott Fitzgerald was the first to mention it in print, in This Side of Paradise (1920), and Hemingway—who drank his daiquiris without sugar—wrote of the cocktail, “The frappéd part of the drink was like the wake of a ship and the clear part was the way the water looked when the bow cut it when you were in shallow water over marl bottom. That was almost the exact color.” A drink so perfect demands respect. And knowledge. So I have my cards.–Ryan D’Agostino

Just like John Mariani, you can have your cards, too. Just click on card below and print out the business card-size recipe on sturdy paper–something waterproof would perhaps be wise–then trim it to size and tuck it in your wallet. 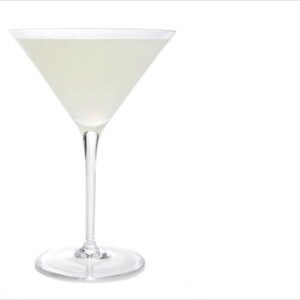 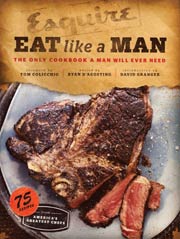 The current state of bartending having degraded to a point where we see entire menus of so-called martinis — none of which have any of the ingredients of a martini — it is refreshing to come across this recipe for a daiquiri, steadfast in its purity. I have to admit a great sympathy for the author and his frustration at trying to get a properly made drink. Anyway, this recipe produces a daiquiri, just like it’s supposed to be. Simple.

A perfect, refreshing cocktail. Nothing like the overly sweet, amusement-park type of drinks this name usually implies. Since I don’t usually drink cocktails (I’m more of a wine gal), I don’t have a cocktail shaker. I used two pint glasses instead, filling one with ice and ingredients, and pouring it back and forth between the two glasses several times until I thought it was mixed well enough.

What can I say — it’s a one-line “recipe” for a classic cocktail, but I loved this version in its simplicity and bright, not-too-sweet flavors. I do think a couple of clarifications are needed for those who might not make cocktails on a regular basis at home. The recipe should really emphasize how long this kind of cocktail needs to be shaken in order to dissolve the sugar and get it super cold. At least a minute, until your arm hurts and your palm gets freezing cold. I used regular white sugar here like the recipe asks, but using superfine (NOT powdered) sugar will make it so much easier to completely dissolve in the liquid. I will use that next time, just like I do in any cocktail I make. Make superfine sugar by blitzing regular sugar in a food processor or a clean coffee/spice grinder.

This is a fantastic cocktail. So simple and refreshing. Sip it slowly, because it can warm you up quite quickly. Loved the slight sweetness, and don’t even think of making it with lime juice that isn’t freshly squeezed. This recipe is a keeper!

If this was good enough for Hemingway, it’s good enough for me. However, I have always made my daiquiris with simple syrup. So, it was with some skepticism that I made it with plain ol’ sugar. Well glory be! It was just as good, if not better. And I was able to make it when there wasn’t any simply syrup in the fridge. A keeper for sure. Now, if we could just get summer to last a bit longer…

This is not your gross, overly-sweet, fruity frozen daiquiri. Those kinds of “cocktails” gives the proper daiquiri a bad name. (I am perhaps a little biased.) This is the way a real daiquiri should be, with some lime, a touch of sweetness, and some good rum. Do note that gold rum is not the same as spiced rum! A couple of these on a balmy day, and you could verily pretend that you, too, were in Cuba.

The absolute simplicity of this recipe automatically puts it in the TC category for me. The one requirement, of course, is good-quality rum. If you have a cocktail shaker, fine. If not, a glass jar will do. When everything is combined, shaken and strained, you have a very refreshing drink ready to be consumed immediately. I like the fact that this is not a fruity, slushy rum “snowcone.” Over the years, I have given up ordering a daiquiri in a restaurant or bar, because they are either too sweet and fruity, or they are watered down after being blended with ice. I will not make changes to the recipe. This is a classic and should be allowed to stand on its own merits.

Going back to the basics, this drink really highlights the flavors and sweetness of golden rum, an alcohol made from distilled sugarcane or molasses. As opposed to many mixed drinks that can cover up the flavors of an alcohol, this one really lets it shine through, so it’s best to use a good quality liquor. Though it’s not Cuban, Flor de Cana is a great choice.

This simple recipe makes a very good, traditional daiquiri. It’s easy to forget what a refreshing drink this can be, when it seems like each new version you come across these days is sweeter and more fancied up than the last. Mariani‘s version is the authentic drink, tasting only of fresh fruit and rum. This daiquiri can be enjoyed before dinner or pretty much anytime without leaving you feeling like you’ve had dessert.

This was so simple, I didn’t think it would come out well. There is something to be said in favor of the basics. This was such a nice, smooth cocktail. There was not one component that outshined another. It was completely balanced and refreshing. A very nice drink for a warm day or a spicy meal.

Loved the daiquiri recipe. Simple, refreshing and delicious. After trying the first daiquiri as written, DH preferred his with no sugar, and I liked a little more lime. So simple to make, we tried variations with ease.

I don’t typically like to drink my calories, but this recipe is to simple to pass up. It’s clean and not a “frou-frou” drink by any means. Pack your shaker with a good amount of ice and get your citrus reamer or squeezer at the ready. I recommend one by AMCO. It’s really durable and dishwasher safe. This would be so easy to make in large batches as well if you have a good lime squeezer. Sip this on a nice hot day (especially if you are in the South) or serve it with a Cuban pork sandwich to round out dinner.