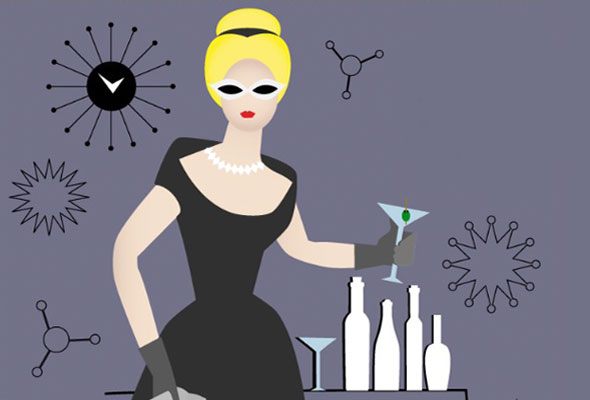 As a kid growing up in a large, Irish-Catholic family in the era of Ozzie and Harriet, I always assumed that the only reason people entertained was to have an incentive to clean the house.

My mother would begin scrubbing weeks before guests were scheduled to arrive, working room by room—sealing off each room after it passed the white-glove test. A path of newspapers would be laid down throughout the house, and no one was allowed to step off it. The kitchen cabinets were emptied and scoured. All the canned goods and McCormick spices were washed, dried, and arranged alphabetically. On the last day of the countdown, all the windows were washed inside and out, and on the day of the party, the bathroom was given a sterilizing makeover, after which boys were instructed to use the woods until the company had left.

Monogrammed linen hand towels that no one ever used were hung on the towel racks. Everybody, including the guests, understood that those towels were never supposed to be touched. They were there to establish our rank in the social order of things. No one was ever surprised when they were returned to the linen closet unused after every party. My brother explained to me that men were supposed to use their socks to dry their hands, but I was never quite sure what the women did. They were always so clever; I suspected they carried a little towel in their purse for such occasions.

By the time all the children were either dressed and scrubbed or hidden and my mother had done her makeup, we were all wiped out—but that was one clean house. The arrival of the guests was totally anticlimactic. We couldn’t wait for them to leave. We were always exhausted.

One day while a friend and I were bragging about how weird our families were, he confessed that his mother took bathroom cleaning a step further and did it the same way Tina Turner recorded “What’s Love Got to Do With It“—buck naked. Naturally, we thought he was putting us on, until he invited us over to watch through the keyhole. Sure enough, she was locked in there with nothing on but her Bab-o cleanser, singing and dancing around. We thought she actually gave Tina Turner a pretty good run for her money. It was comforting to know there were mothers who were even more passionate about cleanliness than my own.

In my mother’s circle, ladies would respond with a kind of coded message whenever they were invited over. They’d always say, “Now don’t go to any fuss, dear.” I learned to interpret that to mean that it wouldn’t be necessary to repaint the house.

After attending an event at somebody else’s place, guests always critiqued the party on the way home, and its success was judged on how much the hostess had fussed. I came to understand that homemaking was a competitive art. At about this time, I began to realize that almost everything in our culture was backward and that it would probably make a lot more sense to clean the house after you had a party. At least you’d have more energy to put into the food.

It’s always a good exercise to ask yourself what will be remembered most by your guests long after the party is over. More often than not, it’s the tiniest personal touches that reflect who you are. Entertaining is simply about sharing your world with others. What could be more fascinating than a glimpse into another person’s reality or fantasy or “fantality,” as we often refer to our world as halfway between fantasy and reality. A party, like a great film or work of art, elevates the spirit, makes people feel life is worth living, and enhances a guest’s self-esteem. We should entertain more often! How else are we ever going to get the house clean?

© 2011 Patrick O'Connell. All rights reserved. All materials used with permission.

Patrick O'Connell is a self-taught chef and founder of The Inn at Little Washington, a five-star restaurant that has been supporting local farmers and artisanal food folks for more than three decades. His way with ingredients is often described as "refined regional" and his kitchen is typically populated with chefs wearing spotted dalmation chef pants humming along to classical music. He's also the author of Patrick O'Connell's Refined American Cuisine, from which the above essay is excerpted.