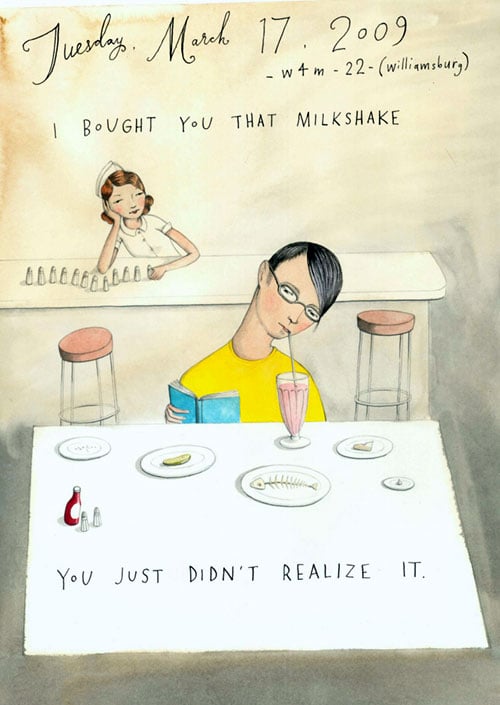 Most of us have experienced a Missed Connection. Right this second, two guys in suits are eyeing each other as they step around the garbage on Market Street in San Francisco. A delivery man in Hell’s Kitchen, New York, is wishing he had paused to hold the door for a dark-skinned woman with a pink scarf. In Cedar Rapids, Iowa, a man and a woman pull up at a crossroads. They are inexplicably drawn to each other. They stare through their windshields, and imagine rolling down the window to say hello. They imagine going to a diner up the road for coffee, their first kiss, whether the other prefers the left or right side of the bed. The lights change and they drive on in different directions.

Untold people a day kick themselves for not being bolder, braver, more spontaneous. Before the day is over, one of those two instant lovers and thousands more will write Missed Connections and post them online. These notices have about as much chance of reaching their intended recipient as a message in a bottle or a note written on a paper plane launched from the Empire State Building. But slightly more chance than leaving a trail of bread crumbs.

Being an illustrator (did I mention I’m an illustrator?) is a mostly wonderful thing. You get to draw wild boars and rocket ships and petticoats and harpoons. You get to choose your hours (which is often all hours, but still, you’re the one choosing them . . . at least that’s what you tell yourself), you can wear whatever you like (today I am wearing a peacock-feather cloak), listen to songs that include a whistling coda (might not be to everyone’s taste), and talk back to Ira Glass as though he’s in the room. You can spend most of the day on the Internet and call it research.

All this isolation can be good for productivity. It can also lead to an atrophied palette, compulsive blogging, and thinking of Ira as your friend. Once a week I make sure I leave my windowless cell in Brooklyn and go into Manhattan, either to see an editor or buy feathers, or to look at the stupendous armor at the Met or at tattoo catalogs on the Lower East Side. One day I squeezed into a subway car with a bushel of peacock feathers and a pound of sea scallops, and a handsome chap squeezed in next to me. We apologized in rounds, and when he stepped off he appeared in the window and mouthed two words. I turned to the girl next to me.

I had no idea what she was talking about, but I didn’t want to seem uncool, so I made a mental note. I got home, dropped my scallops and feathers, went to the computer, and looked up Missed Connections.

Here is the first one I read:

You had a guitar, I had a blue hat
—m4w – 28
We exchanged glances and smiles on the subway platform.
I pretended to read my New Yorker but I couldn’t concentrate.
You got on the Q and I stayed on to wait for the B. You were lovely.

In the space of eight seconds I had experienced love, loss, and regret.

I held my breath and clicked on the next post.

I’m a gleaner, always on the lookout for material. I pick up anything handwritten and crumpled. I eavesdrop shamelessly on buses. I collect old photographs and sift through faded telegrams at flea markets. I liked reading Missed Connections. I would make paintings of them.

For regular readers of Missed Connections, and there are many of us, I think there exists, deep down, a small desire to maybe, possibly stumble upon ourselves described. It’s not that we’re really looking for someone. (I’m in a happy relationship, blah, blah.) But who doesn’t want to be found attractive by strangers? 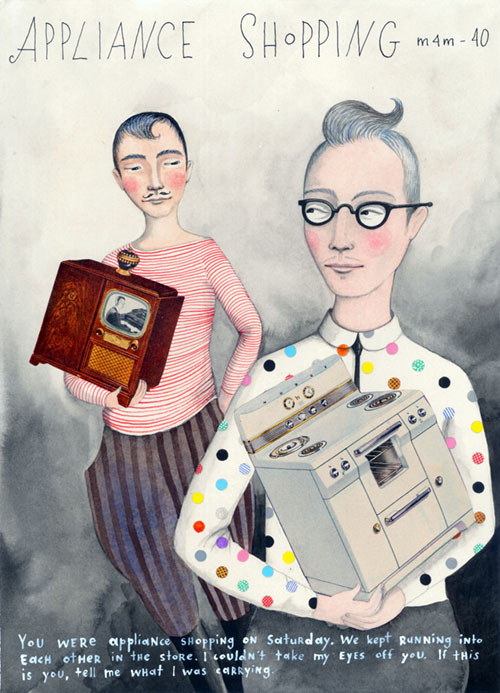 It’s also nice to know people are paying attention to one another, noticing tiny details (“the cute gap between your teeth,” “you had a bruise on your cheek,” “your shoelace was untied,” “you were using a paper plane as a bookmark”). The enormous amount of tenderness in these messages makes me all swoony about my fellow human beings. 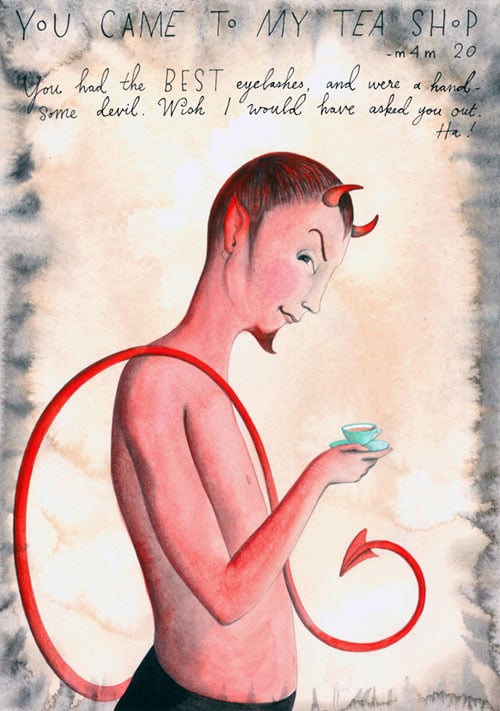 People miss each other on street corners and in cafés, walking their dogs and getting their hair cut, at the gym and at the grocery store, on rooftops and in elevators, even in the emergency room. And each individual collision is a fragment of a story containing great big familiar themes of love, loss, and regret and, ultimately, and most importantly, hope. It’s a hopeless sort of hope, but it’s very compelling. We want to know if the guy gets the girl, don’t we?

I have a confession to make. I don’t really want to know. I like a happy ending as well as the next person, but I love the mystery and the uncertainty and the electric current of possibility. 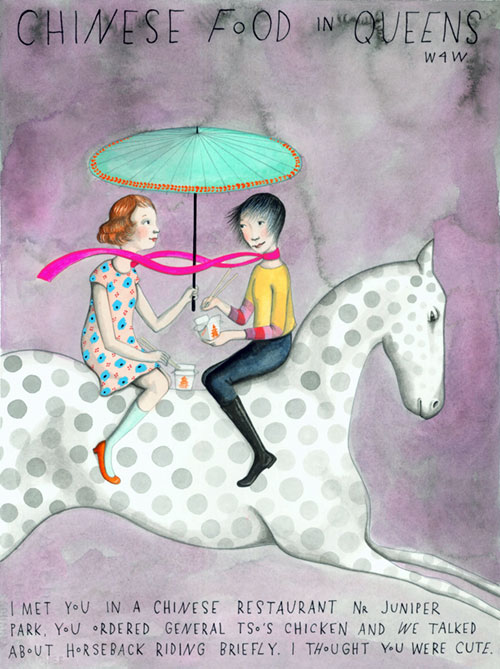 There’s a reason the best love stories end at the first kiss. Jane Austen had this down; it’s all about the chase. We’re not really interested in Elizabeth and Darcy after the wedding bells fade, or in Cinderella and her prince after the slipper is returned. Love at first sight is almost entirely visual. In most cases we don’t even hear the other’s voice. I think there’s a lot to be said for this. We can fill in the blanks and create our own particular rosy ideal. As you glimpse your angel across a crowded room you have no need to accommodate her overbearing mother; noticing your dreamboat on the morning ferry you have no reason to suspect his tendency to forget your birthday. The less you know, the more creative you can be.

Moments of intimacy with strangers are minor detours we rarely explore, but those moments make us feel alive, and human, and part of something greater than ourselves. They connect us to each other. Maybe one of them will post a message and maybe, just maybe, the other person will happen to go online the next day and read it, recognize the encounter, and respond to the message and arrange to meet and fall in love.

Probably not. Maybe the one who writes the message doesn’t really expect an audience. But I am there, reading and taking notice. I am the audience, and so are you.

© 2011 Sophie Blackall. All rights reserved. All materials used with permission.

Sophie Blackall has illustrated more than 20 books for children, including Ruby's Wish, Meet Wild Boars, Big Red Lollipop, and the Ivy and Bean series. Her editorial illustrations have appeared in the New York Times, the Wall Street Journal, the Washington Post, and many magazines. Originally from Australia, she now lives in Brooklyn, New York, with her family and a stuffed armadillo. You can see more illustrated Missed Connections in her book, Missed Connections, from which this essay was excerpted, or at Missed Connections.