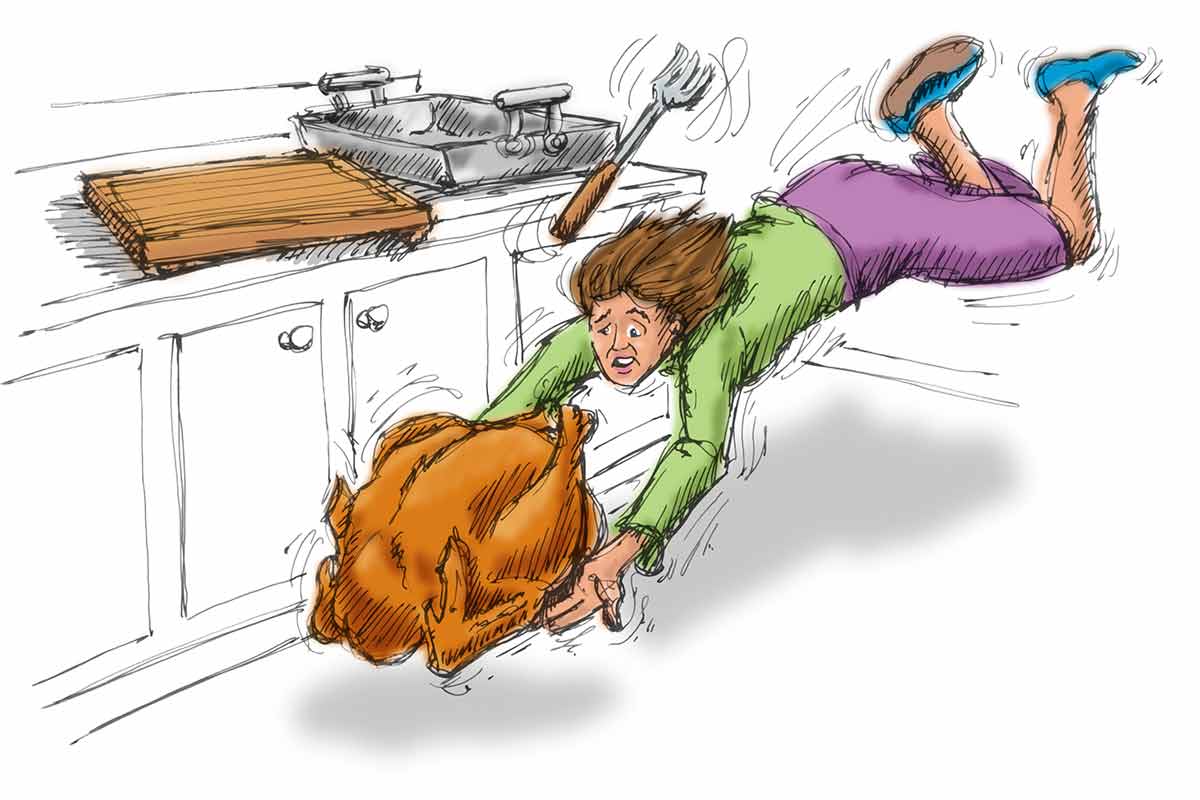 The table is set. The guests are gathered. You’ve planned for every possible contingency. But you forgot one thing. Your sleek, chic, trim Tom Cruise of a Thanksgiving turkey will eventually morph into a sweaty, bulky, out of balance, downright gawky John Goodman of a hen by the time it comes of the oven. And you somehow have to get it from the roasting pan to the carving board while decked out in your holiday finery.

Before you commence with the heavy lifting, a few things to cross off your checklist:

Next, take measure of your bird. Is it stuffed or not?

Unstuffed
We’re not in favor of turkey lifters, hooks, or other contraptions for toting birds. They tend to be flimsy or afford only a single point of contact.

And we’ve seen a bird trussed with butcher’s twine in such a fancy, convoluted way that it included a looped handle for picking the thing up. We’ve also seen that bird on the floor.

Complicating matters is the fact that open-cavity birds collect a pool of scalding hot juices while roasting, which tend to spew at inopportune moments. You’ll need to tip out the juices carefully into the roasting pan after you hoist the bird but before you can safely transport it. Okay, now that you’re armed with that warning, you can proceed. Our preferred methods of transport? Any of these:

Stuffed
Things are a little more complicated with a stuffed bird. You could first spoon the mushy goodness into a serving dish while the bird is still in the roasting pan, thereby allowing you to rely on any of the above turkey transport options.

Or you could leave the stuffing inside and intact, provided you’ve first checked to make sure it’s not a bath of juicy, eggy pathogens. Use silicon mitts or clean towels to grasp the whole dang bird and get the centerpiece of the meal to the carving board. But you’ll risk some of the stuffing plopping into the pan and getting coated in gunk. So, in our opinion, spoon it or lose it.

Oh, and if your board doesn’t have a channel around the edge, roll up paper towels and place them around its perimeter, right up against all four sides. They may not be good for the environment, but they’ll absorb the turkey-juice tsunami that may ensue, making clean-up a snap. Chances are you were in the kitchen all day. You don’t want to be there all night, too. Originally published November 19, 2011.