This chicken, navy bean, and spinach stew is a quick weeknight winner dinner. Mushrooms, potatoes, onions, and garlic round out the dish.

I was abandoned on New Year’s Day by The One.

Yes, I was left to kick off 2012 by my lonesome. Just me and the kids. He was on his way to a five-day respite at Kripalu, a center for yoga and health in Stockbridge, Massachusetts. Far be it from me to stop him from bending himself into a human challah braid every morning at 6:30 and eating Tofu Surprise three times a day. We each have our own path to enlightenment. Mine just happens to be slicked with butter and duck fat.

His hope was to get centered, cleanse both body and mind, and sort through some things that have been weighing on him. Being the immensely insecure–and let’s just say it: self-centered–person that I am, I immediately thought it was all about me. So at the front door, I flipped up his collar, tugged him close to me, and warned, Don Corleone-style, “Don’t talk to anyone thinner, richer, or cuter than me.” He simply smiled, long ago inured to my threats, protestations, and tantrums. “I mean it!” I added.

And yet at the same time I was doing a private happy dance, looking forward to being on my own. When The One’s away for a spell, I instantaneously revel in living like a bachelor. Think my Oscar Madison to his Felix Unger. Plates stack up, clothes hang from everything, almost-empty milk cartons sour on the coffee table. Sometimes I don’t even shower and shave for days. It’s only when I’m pulled away from my computer by the doorbell announcing that Sarah, our UPS driver with the gunslinger walk, is waiting that I realize with horror how hideous I must look.

This time, though, I wanted things to be different. In honor of The One, I intended to wake up early, do Rodney Yee yoga (that is, if I could find the damn DVD that I have a tendency to use as a bookmark), meditate, and eat well.

Waking early screeched to a halt the first morning when I stumbled out of bed, scratching my ass and squinting to see the clock. 9:30 a.m.

Meditation lasted two days, then ended abruptly when I went from gently quieting my mind to falling asleep for the afternoon.

All I had left from my half-hearted attempt at spiritual enlightenment was eating well.

Ah, my old nemesis. Healthy eating. By now you know my philosophy about food: I worship, my double-chinned head bowed, at the altar of fatty fat fat dishes. I didn’t earn the moniker Fatty Daddy for nothing. But to commune with The One, and to do a little bit of detoxing from, shall we say, an abundant holiday season, I would embrace clean eating. Never one to rush into anything good for me, I decided I’d kick off my cleanse on the night of his return with a cozy Zen dinner for The One.

Looking for inspiration, I browsed through the hundreds of recipes on this website. Renee, ever a mindful and healthful eater, even sent me a list of Zen-ish dishes. Nothing was striking the right Kripalu chord. Then one of our regular readers raved to us about the Quick Navy Bean Stew recipe from Everyday Food that we featured early last year. I decided that would be my humble way of welcoming The One back into the world of the anxious and harried. I was certain it would be perfectly Zen-like because: a) it’s simple, and b) there wouldn’t be a drop of butter, cheese, crème frâiche, or foie gras to clog his chakras.

But I was equally certain that The One, despite his pronouncements of a near-vegetarian leaf being turned, would want something a little more substantial. (Isn’t he still the man who eats two, sometimes three, helpings at dinner? Isn’t he the same man who caves every time there’s chocolate in the house?) Oh, how terribly thin the line between sabotage and hearty cooking. I considered tossing in ham hocks or glugging in lots and lots of cream. (Hey, it’s my nature.) In the end, I added lean chicken breast, more potatoes, garlic, more herbs, and what has now become my new stealth bomber of an ingredient: demi-glace. A tablespoon or two stirred in at the end adds enough flavor to make you weep–or, at the very least, lick your bowl.

Happy to have him home that Friday, I coddled and pampered and fussed. When I placed the stew in front of him, he did a bit of a double take (after all it was I who made it). It was–I can’t believe I’m saying this–excellent. I sat through the rest of dinner attentive, although completely disinterested, as he flipped through the Kripalu cookbook he’d bought, listing all the dishes he enjoyed there and was determined to make for us: peanut butter energy bars topped with vegan (VEGAN?!) ganache; a spinach salad with blue cheese, dried blueberries, and candied hazelnuts; winter ratatouille; and greens, greens, and more fresh greens. I agreed to eat real food, but I drew the line at anything with soy milk. The last time I checked, soy beans don’t have teats.

During our second bowls of soup I grew suspicious of how fervently he was thumping the metaphorical Birkenstock Lifestyle Bible. This from the man who, when driving by the Black Angus cattle at Grey Ledge Farms on our street, waves and shouts, “Hellooooo, roast beef!” After some prodding he let slip that he lost all sense of decorum and, although downward-dogging, breathing, and journaling all week, he pigged out at mealtimes. As a result, he came home the heaviest he has ever been.

“The food was…fabulous,” he said, looking wounded and confused. “I thought all that vegetarian and vegan stuff was supposed to be horrible and low cal.”

Determined not to gloat, at least not until the incandescence of his experience wore off, I said nothing. I still haven’t. We’ve simply gone back to eating as we always have–roast chicken, pork chops, leg of lamb, mashed potatoes, ice cream–and he’s losing weight.

In 2012, ignorance is the new enlightenment.

The most important part of the recipe is the seasoning. Make sure you salt it throughout the cooking process. And taste, taste, taste. Something so simple needs salt to make all the ingredients play well together. –David Leite

LC Salt of the Earth Note

For God’s sake, don’t put salt and pepper on the table. It discourages those guests who like to jiggle the shakers while chatting–before they even take a bite. Sacrilege. 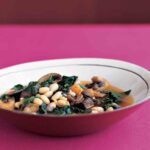 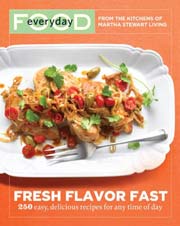