This creamy onion tart is exquisite and exquisitely simple to make. The filling is nothing more than sauteed white onion, butter, cream, milk, and eggs. The crust is a flaky, buttery pâte brisée. 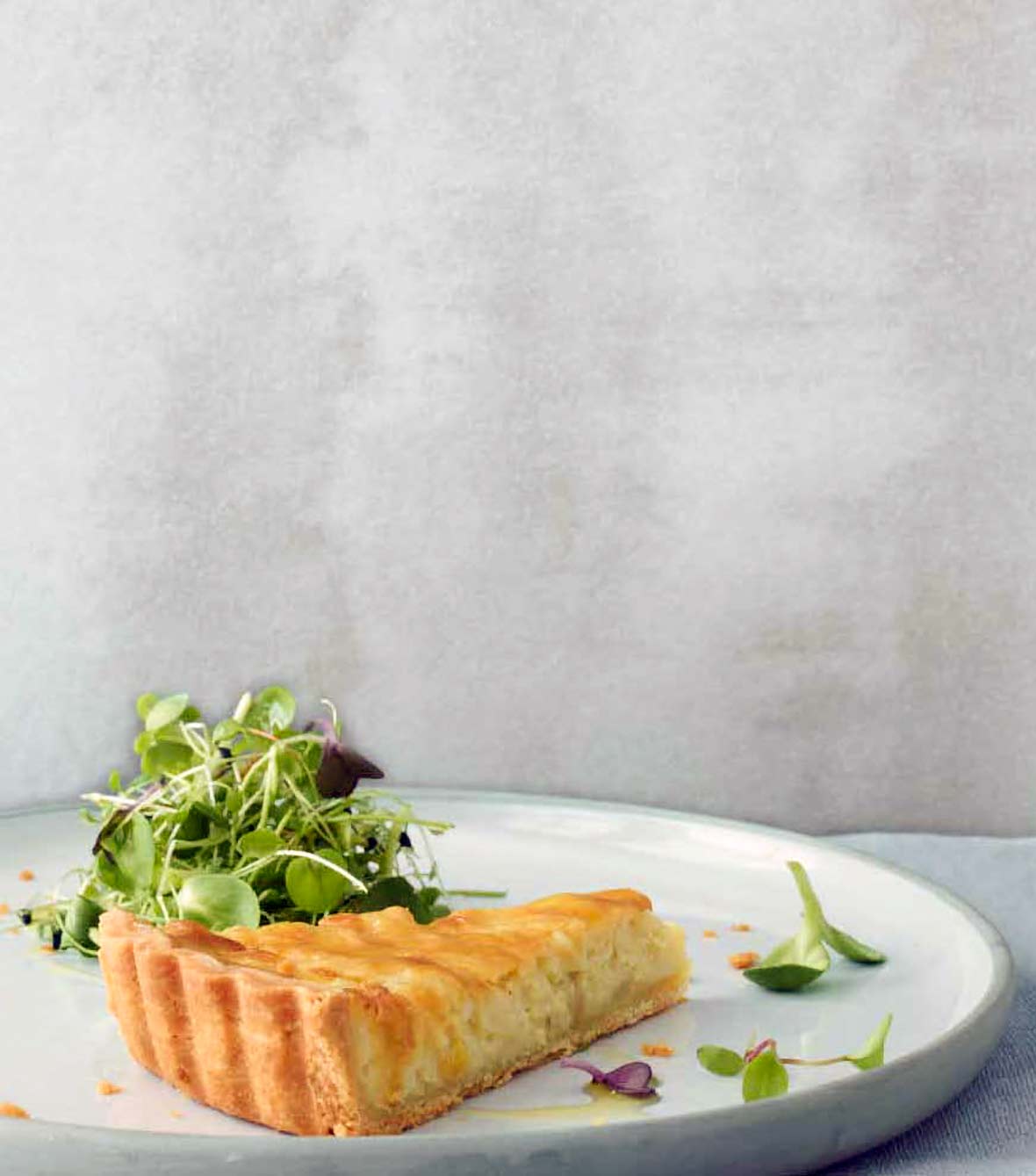 For four generations, the Vongerichten family has been turning out this tart, which is like a quiche but creamier. Originally published March 20, 2012.–Renee Schettler Rossi

“Its greatness lies in its simplicity,” wrote LC recipe tester Susan B. of this onion tart after making it–and promptly swooning to it. Who are we to argue with such sophisticated logic? What also wowed and wooed us was how satiating it was in those sort of in-between-the-seasons temperatures when the days are warm but the nights still quite cool. 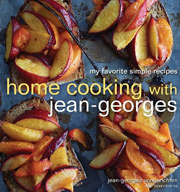 Preheat the oven to 325°F (163°C).
In a large skillet, combine the onion, 2 tablespoons of the butter, and a generous pinch of salt. Cover and cook, stirring occasionally, over medium-low heat until very tender and pale gold, about 25 minutes.
In a large saucepan, melt the remaining 2 tablespoons butter over medium-low heat. Add the flour and cook, whisking constantly, until the mixture smells nutty, about 2 minutes. Whisk in the milk and cream in a slow, steady stream. Still whisking, bring to a boil and cook for 2 minutes. Remove from the heat and let cool slightly, whisking occasionally.
Pour a little of the cream mixture into the eggs, whisking until completely combined. Slowly whisk this mixture back into the cream mixture in the saucepan, a little at a time, until well incorporated and smooth. Stir in the caramelized onions, then season to taste with salt, pepper, and nutmeg. Spoon the mixture onto the pate brisee, spreading it evenly.
Bake the tart until golden brown and a knife inserted in the center comes out clean, about 1 hour. Let the tart cool in the pan on a wire rack for 20 minutes, then unmold. Slice and serve warm.
Print Recipe

This creamy onion tart was delicious and creamy! The sweetness of the onions caramelizing made the kitchen smell heavenly. The filling was very thick when putting it in the tart crust, but it came out very creamy. We felt the tart needed some salt in the filling. Using unsalted butter and no cheese, I would add one teaspoon kosher salt next time.

I did not bake for the full hour. I baked the tart for only 40 minutes after blind baking the crust as instructed. The Pate Brisee recipe was also easy to follow for a flaky tart crust. This was a wonderful and warming dinner with a salad after shopping for the holidays! I’ll definitely keep the recipe around.

WOW… this creamy onion tart one was a HUGE hit, especially with the toddlers. I was very surprised, as the onion taste was pretty pronounced. It was nice and creamy and cooked to perfection. Everyone absolutely loved it.

Short on ingredients but long on flavor. Follow the instructions and a rich, delicious creamy onion tart will result. I got a bit concerned with how thick the roux and resulting custard mixture became, but it worked perfectly and was thick enough to rise in slightly domed form above the edge of the crust without spilling over. I used the accompanying crust recipe, and it was perfect, too. As for servings, I would say it serves four with a small salad for lunch or light dinner, but then again, I’m not known for my restraint regarding pastry.

Don’t be tempted to add anything to this onion tart. Yes, a bit of fresh thyme would be delicious, but it doesn’t need anything but salt, a healthy grinding of pepper and a grating of fresh nutmeg. Its greatness lies in its simplicity.

I took the onions a bit past pale golden and after baking, they were tender and sweet. Originally, I thought one large onion wouldn’t be enough, but it was just right. I baked the tart in a 9-inch pie pan and while it looked a bit skimpy, the tart turned out just fine. It slid right out of the pan and sliced like a dream. Also, don’t worry if you have leftovers. The tart is delightful served room temperature the next day.

I decided to make this creamy onion tart as an hors d’oeuvre for a Christmas party, I cut it into little wedges and served it a little warmer than room temperature. It was a big hit.

As per its name, the tart was very creamy. The caramelized onions added great flavor, especially when seasoned with freshly grated nutmeg. This tart has great versatility and can be served as mentioned above, but would also be nice as a brunch dish, a lunch dish with a side salad or a light dinner.

A nice touch would be some Gruyere or Comté grated on top of the tart before baking it. One suggestion would be to use a large saucepan rather than a large skillet to caramelize the onions and then use that same pan to make the filling. This will make for one less pan in the clean-up!

This creamy onion tart was a rich and flavorful side dish for a roasted chicken. There are a lot of steps—making the dough, chilling it, rolling it out, chilling it again, blind baking, preparing the filling (both the onions and then a roux-based custard), and finally baking again. But none of the steps are especially difficult, and the dough can be made and frozen well ahead of time. The crust was flaky and the filling warm and savory…a perfect winter dish.

This rich (but not too rich) and creamy tart made a nice accompaniment to a spinach salad with bacon and mushrooms. The filling was fairly simple to prepare, and the fluted crust made for an attractive presentation of wedges on the plate. Hands down, this recipe is a winner. I used the Pate Brisee recipe that was included with the tart recipe. While the dough was easy to work with and it turned out very well, the recipe proved rather time intensive. For the second round of chilling, I put the dough in the coldest part of my refrigerator for a couple of hours rather than trying to clear enough space in my freezer to freeze it overnight. That worked out fine.

I enjoyed it very much. I’m also into lightening foods that I enjoy. I would use phyllo dough instead of pie dough, evaporated skim milk instead of milk and cream., egg whites instead of eggs and caramelized the onions in EVOO.

Back to Creamy Onion Tart on Leite's Culinaria