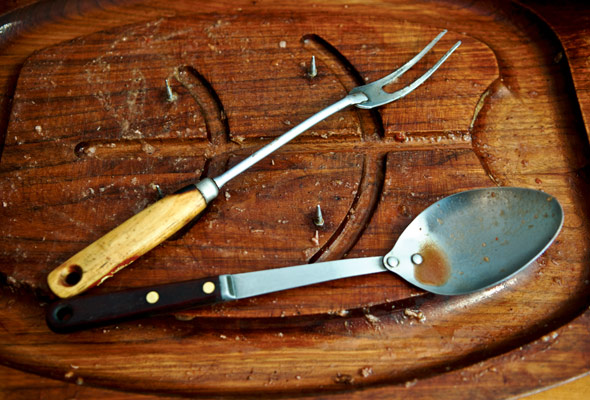 I didn’t even know what brisket was until I was about 25 years old. My mother never made it. (Can you say, “Vivian, Swedish Lutheran lover of lutefisk?”) But years later, when I put the first piece of voluptuous beef into my mouth, fork-tender, adrift in a rich, sweet onion gravy…well, you had me at brisket. (Full disclosure: My father, Mannie, was Jewish, so clearly I have a strong brisket gene.)

Not long after, when one of my closest friends revealed the secret ingredient in her family’s brisket recipe, I started to cry. That’s the moment I realized I needed to get to the bottom of why so many of us have such a strong emotional attachment to this sort of blah cut of beef. A buttery rich madeleine you could understand. So French, so delicate, so, well, so Proustian. “Whence could it have come to me, this all-powerful joy?”

But why does a flaccid, four-pound, gray-brown piece of beef shaped roughly like the state of Tennessee inspire Proustian prose, evoke the deepest pleasure, and create indelible memories?

Is it because it’s so simple and forgiving that even the worst cook can make a good one? A basic brisket requires little more than a few juicy ingredients to keep it from drying out. That and the patience to wait for it to cook s…l…o…w…l…y.

Is there something to the fact that brisket is just so unpretentious? In a world of Rachel Zoe makeovers, brisket is completely comfortable with what it isn’t. Brisket isn’t some snobby dish you can’t pronounce or afford. It’s not posh–rarely has a truffle ever gone into the making of one. Molecular gastronomists haven’t been able to alter brisket’s perfect DNA or turn it into a foam. It has no airs. It’s as content bathed in ketchup as it is nestled in a day-after taco.

Or could it be that for years, brisket was so affordable you could serve your whole family, invite the neighbors, set an extra place for the rabbi and his wife, and still have leftovers for a week?

While all these things are true and contribute to brisket’s lasting resonance, I believe the real reason for its powerful allure is even simpler. Brisket will be what you want it to be. And that, with all due respect, is more than you can honestly say about your teenager, your hair, your Labradoodle, or most members of Congress.

On a cooking level, it’s a perfect culinary blank canvas, adept at adapting to everything you rub on or throw in, from garlic salt to Liquid smoke to miso to gingersnaps to huge gulps of Coca Cola.

On an emotional level, you can celebrate with brisket, mourn with it, diet with it, defrost with it, court with it, make a friend with it. If brisket didn’t have the power to seduce, there wouldn’t be what’s called The Brisket Brigade in certain Jewish circles. (These circles, by the way, don’t even admit there is such a thing.) Here’s how The Brisket Brigade works. When a man is widowed, thoughtful neighbors and friends (read: unmarried women) console and comfort him the best way they know how: by dropping off a pot of still-warm, homemade brisket. With a heady cloud of steam drifting into the air–all deep fragrance and heavenly flavor, well…it’s enough to make a man think how nice it is to have a woman around the house. A loving, caring woman with a fine, deep pot and a brisket recipe.

That’s the beautifully complex nature of this very simple cut. When you get right down to it, brisket has to do with life. Remembering it, sharing it, celebrating it.

Let me just say what you can already feel. I love brisket. I say, a brisket in every pot, in every Crock-Pot, on every Weber, in every barbecue joint, on every Passover platter, in every deli, at every butcher, in every food truck, on every TV food show, food site, food blog. To quote the Pulitzer Prize-winning poet, Mark Strand, “I raise my fork and I eat it.”

[Editor’s Note: There are two things we can’t seem to get enough of this time of year–brisket and Stephanie Pierson’s wit and way of seeing the world. The below video indulges our desire for a little more of each….]

Stephanie Pierson is an author and journalist who writes about food, design, and lifestyle issues. Her work has been published in The New York Times, Saveur, Metropolitan Home, and Eating Well. She is the author of a dozen books, including The Brisket Book: A Love Story With Recipes, from which this essay was excerpted, and has ghost-written five cookbooks. @steviep0303