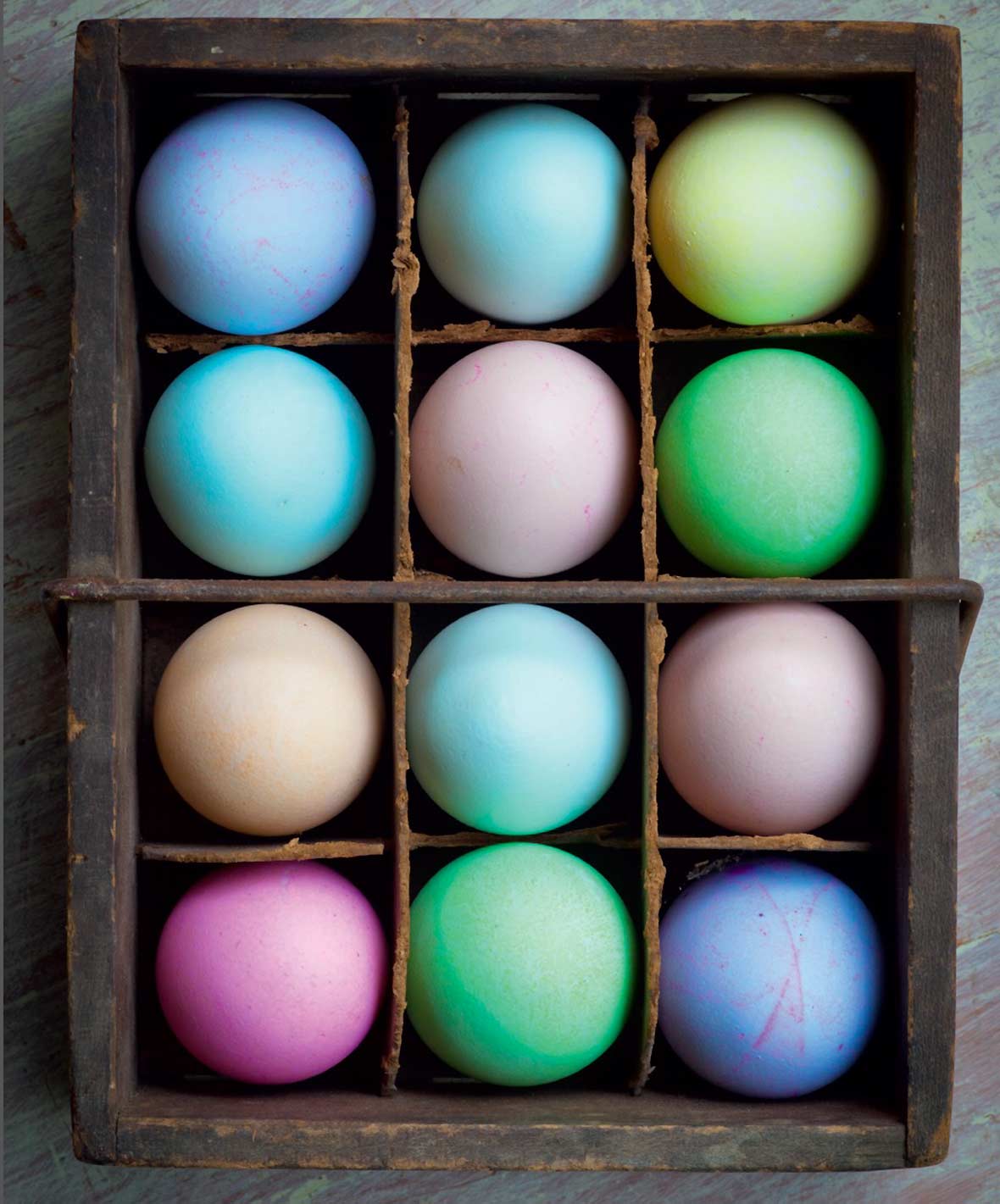 I love Easter. Always have. Although truth be told, I find the holiday to be a bit odd. Or maybe it’s just the related rituals that I consider to be curious.

I was given pink and blue chicks for Easter one year by a good friend of my parents. Never mind pink and blue eggs. They’d actually dyed chicks Pepto-Bismol pink and robin’s-egg blue. My mother, who knew nothing about farming and almost as much about domestic affairs, thought it’d be fun to let the chicks live in our small kitchen. This is the same woman who once stapled my Girl Scout badges to my uniform because she refused to learn how to sew.

I was certainly game to give it a try. It was the ‘60s and we were living in Maine at the end of a dirt road that overlooked a cove. It was an enchanting place, with ample lady slippers, mussels, and crabs, but it was also a remote place, without any other kids for an only child to befriend. Still, we’d moved there from the city just the year before, so rural living was new and exciting for all of us. Chickens in the kitchen fit right in.

Those chicks were little bundles of fluff, small enough to be cupped in my four-year-old hands, whose cuteness belied their pain-in-the-buttness. My mom and I resurrected a baby gate from the cellar to keep our pets penned inside the kitchen and fashioned a nest from the monogrammed bath towels that my fancy Connecticut grandmother sent us every year at Christmas. During the next few weeks, the chicks hopped around, pooped on the linoleum, squawked in between my legs as I poured Corn Flakes for breakfast, and crowded the fridge’s toasty warm foot pedal that flipped open the freezer door.

That lasted until one day in May, when my mother attempted to make a cake for my fifth birthday. I’d coaxed her into baking it in my new Easy-Bake cake pan, which she’d slid into her grown-up oven for the usual 45 minutes at 350 degrees. The kitchen filled with smoke and the girls fluttered and flew over the baby gate (who knew chickens could fly?) and into the dining room, sending our dog, Jezebel, into a tizzy. An ancient toy Manchester Terrier with bad breath, missing teeth, and a cranky disposition, Jezebel was prone to epileptic seizures. I have very vivid memories of my mother telling hilarious stories at cocktail parties of holding Jezebel down at inopportune moments while the poor thing went off like a firecracker. Roving chickens and an epileptic dog? The chicks had to go.

That Saturday, my father packed my pastel chicks in a box, loaded them in the back of our T-bird convertible, and off we went to a farm in neighboring Falmouth. Driving up the long lane, we watched dozens of dyed birds identical to mine running amok, almost as if they were lifting their pink and blue skirts and making a mad dash for safety. Even to my kindergartener sensibilities this scene seemed ridiculous, which took the sting out of losing my pets. (Although honestly? I really hadn’t been wild about the chick poop all over the place.)

The rest of my childhood Easters were rather boring by comparison, marked only by nondescript colored eggs.

Today I have eight hens, none of them dyed and, thankfully, none of them taking up residence in my kitchen–at least not for more than a month, but that’s another story. While most people nowadays are aghast at the notion of painting chicks, there’s only modest consternation about dyeing eggs. And it’s an issue for some of us only because we wonder whether we ought to eschew all things artificial, including fizzy PAAS tablets. (I sidestep the issue by supplementing naturally dyed eggs with the greenish blue ones laid by my Araucana, a.k.a. the South American Rumpless, an heirloom bird that’s a dead ringer for Carol Channing.

Yet we continue to submerge unhatched chicks in colored water and proceed to hide them where they may never be found, only to foul the air with a noxious odor, one that’s even worse than chicken poop, after several days. Does this strike anyone else as just a little odd?

Apparently not. And so our Easter customs continue, no matter how curious. Those of you who still think dyeing chicks is strange but dyeing eggs isn’t, and there are many of you, perhaps you and I should chat sometime about the notion of a bunny laying eggs.

Jennifer Thompson Trainer is the author of 11 cookbooks, including The Fresh Egg Cookbook and The Joy of Family Traditions. She's also a contributing writer to The New York Times and Travel & Leisure, among other publications, and has been nominated for three James Beard awards. She lives in western Massachusetts with her family and a flock of backyard chickens.