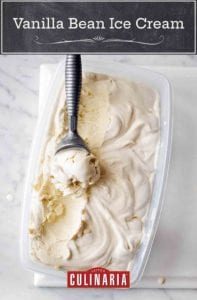 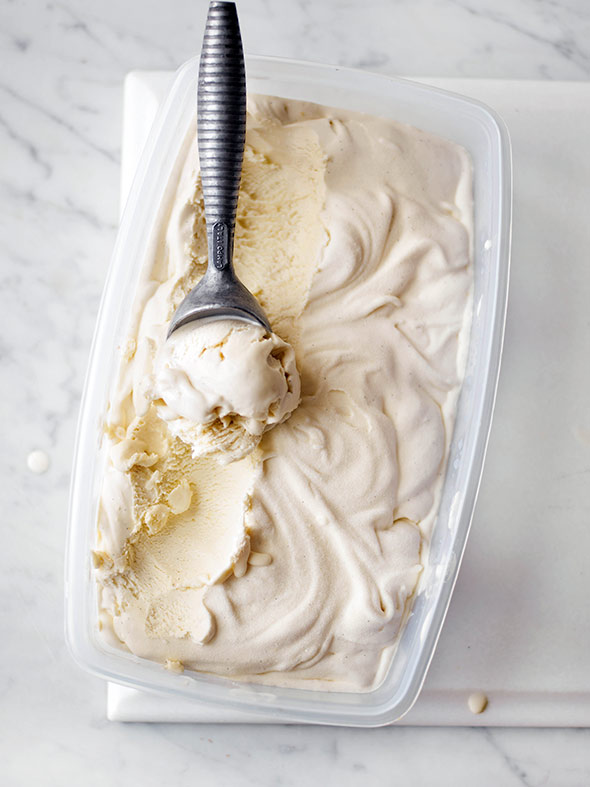 Those of us who crave vanilla ice cream know that sometimes you don’t need a lot of bling. Sometimes it’s nice to just let your spoon sink into something that tastes pure as the driven snow. Okay, vanilla-enhanced snow. Indulgently rich, creamy, sigh-inducing, vanilla-enhanced snow. This vanilla bean ice cream recipe is for those times. Of course, if you wish to stir in whatever at the end–some crushed black raspberries still warm from the garden, a package of chopped peanut butter cups, a swirl of fig preserves, a handful of chopped nougat–we’re not going to stop you. Not even going to try. Originally published May 25, 2012. –Renee Schettler Rossi 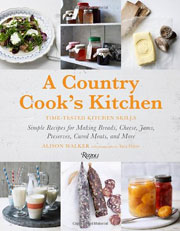 Split the bean lengthwise and use the tip of a sharp knife to scrape out the seeds. Place the vanilla bean and seeds in a saucepan along with the milk. Place over medium heat until hot but not boiling. Remove from the heat and let infuse for 30 minutes.
Mix the egg yolks and sugar in a medium bowl. Remove and discard the vanilla bean from the infused milk. Gradually blend the infused milk into the yolk mixture, using a wooden spoon or a whisk, then set aside while you wash and dry the saucepan you used to infuse the milk.
Return the milk mixture to the clean saucepan and cook over medium-low heat, stirring constantly, until the custard has thickened sufficiently to coat the back of a wooden spoon. Do not allow the mixture to boil or it will curdle.
Strain the mixture into a bowl and let it cool slightly. Cover with plastic wrap, gently pressing the wrap directly against the surface of the custard to prevent a film from forming, then refrigerate until chilled through, maybe 4 to 6 hours if you’re impatient or, preferably, 24 hours if you’re the sort who can tolerate a little anticipation. (Here’s the thing. The longer the custard stands in the refrigerator, the more flavor will develop.)
Stir the cream into the custard.

If using an ice cream maker, follow the manufacturer’s directions.

If using your own devices, transfer the mixture into a shallow freezer-proof container, such as a roasting pan, and freeze until ice crystals form at the edges, about 2 hours. Turn it into a bowl and beat with a hand-held electric mixer or a whisk. Pour the mixture back into the container and return to the freezer. Repeat every 2 hours until the ice cream is completely frozen.
Print Recipe

Vanilla bean is my favorite ice cream flavor. This version is pretty great. I’m a big texture person and I love the rich creamy base and the crunch of the seeds from the vanilla bean. I can see making the custard in the morning (or even the night before) and mixing in the cream and churning when we’re ready for dinner, I mean dessert. The ice cream doesn’t need to be hardened–it’s perfect to eat just out of the ice cream maker. However, I might decrease the sugar just a bit and add a pinch of salt. It’s a bit on the sweet side for me.

I LOVE ice cream. I’m not one of those fair-weather ice cream eaters, who only indulges in a cone when it’s a perfect, say, 80-degree day on the boardwalk. I am a harsh critic, and, to be honest, vanilla doesn’t usually jazz me too much. I’m much more a chocolate gal. But this rich, creamy, easy-to-make ice cream is fantastic. It’s no more labor intensive than any other ice cream, and tastes just fine without superfine sugar (I didn’t even blitz my granulated sugar in the blender and the ice cream came out fine). It takes about five hours to be completely chilled. I will say, as is the case with most homemade ice creams, that its best the day you make it. This isn’t uncommon, though.

Not sure what to say about this other than that it’s rich and perfectly delicious. I’ve found my go-to vanilla ice cream! The only thing I would change next time is to maybe add a little vanilla extract to the milk mixture to intensify the vanilla flavor. Also, I infused the mixture in the fridge for 24 hours.

When the first words you hear out of your family members’ mouths are “OH MY,” you know it must be great! I was leery of this recipe because it did not call for any vanilla extract, and I wondered if the vanilla bean would be enough flavor. But I had just received an order from Spice Barn and they sent me a free bag of Madagascar vanilla beans, which were more plump and tender than ones I have bought at the store, so I was excited to try this. I loved all the dark flecks of vanilla in the custard-like ice cream, but barely got to taste it myself as it was consumed so quickly. I did change one thing. In a hurry to try the ice cream I completed the first three steps, then instead of putting the mixture into the refrigerator I put it in the freezer for about one hour, making sure several times it was just cooling and not starting to freeze. I then moved it to the refrigerator for an hour before adding the cream and putting the cooled mixture into the ice cream maker. The only thing that made this recipe better was when my husband put some on top of a warm Krispy Kreme donut–the perfect storm of warm/cold, creamy and not too sweet/gooey and very sweet….wow.

Had to make a follow up comment about this ice cream recipe. I have made it 2 more times since my original testing, the second time I quadrupled the recipe. I got in a rush and did not strain the ice cream, then I realized my tiny ice cream maker will only make 1 recipe at a time so some of the mix sat in the refrigerator 2 days. Still turned out perfect! Everyone agreed it is the best vanilla ice cream they have ever tried! Thank you for another great recipe!!

This was a rich, creamy, vanilla-y cold delight! I didn’t strain the mixture as it was very smooth and I like vanilla beans in ice cream. I chilled it overnight and the next day used an ice cream maker, and it did a beautiful job. I would definitely make this again.

I always seem to try variations of chocolate, fruit and exotic flavors of ice cream, but for some reason I rarely make vanilla. Past experiences have only been so-so, because I was either trying to cut down on fat or sugar or I was using vanilla extract instead of the bean. This is a case of “less is more.” There are only five ingredients, but good quality, high fat ones. This is truly ice CREAM, not some watered down substitute! This is rich enough that you don’t feel that you need an extra bowl to be satisfied. Put this together early in the day, chill and put it in the ice cream maker before dinner and voila, dessert awaits! I will try this as a base for other ice cream flavors this summer.

Pretty darn good. In a future life, I want to return as a vanilla bean. The ice cream really benefits from the step of steeping the milk and vanilla bean. Skipping this 30-minute part would be a bad idea. Once put into the refrigerator, the mixture cooled in three hours. I also used an ice cream machine and put the ice cream in the freezer to finish hardening, probably another hour. Really simple and delicious. Nothing “fake” about the vanilla flavor.

Simple ingredients, big flavor. This vanilla ice cream is a breeze to make and the texture is very smooth and creamy. The addition of heavy cream at the end allows the custard to really absorb the flavor of the vanilla but does not overpower the custard. This recipe is a good base for endless possibiities.

This is my favorite ice cream. It’s as good as, and usually far better than, any ice cream that you can get commercially. Anyone with a stove and a freezer can make this. No heavy machinery, no salt, no ice, etc. I use this for every occasion, and I even make ice cream sandwiches with it. I also substitute a cup of French roast coffee beans for the vanilla bean and make one of the finest coffee ice creams ever. As always, make a double batch; you won’t be sorry.

I just started the custard for this recipe, which I’ve made many times, and realized I’ve never left a comment on it. We love ice cream and this recipe is tops. My husband now refuses to eat any store-bought variety.This recipe is simple and straightforward and the taste is positively decadent. The hardest part about it is keeping little (and big) fingers out of the custard while it’s chilling! I did receive one complaint, though. “Why didn’t you make that amazing Classic Apple Pie to go with it?!” Men!

At a recent appointment to the oral surgeon’s office we found out both my sons need to have their wisdom teeth out. The doctor, a good friend, was going through the standard talk and mentioned using a straw and eating only soft foods when one of my sons said “YES! Mom, will you make the Vanilla Bean Ice Cream?” I agreed it was the perfect thing to take their mind off any pain. Later that night the doctor’s wife called to request the recipe. This ice cream is so good, my teenage sons are no longer dreading surgery!

Back to Vanilla Bean Ice Cream on Leite's Culinaria