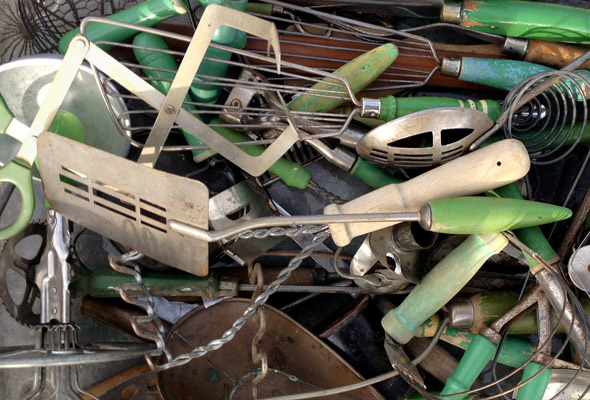 When I was a kid, it took me a long time to unravel the mystery of the yo-yo. For years I’d fling the damned thing just like everybody else, and then watch as it’d zip down to the end of the string and…just hang there, leaving me with a yo-yo on the end of a string. The other kids didn’t seem to have this problem. Their yo-yos came back up. This went on and on until I was about 10 years old, when finally one afternoon, in the hallway outside of Mrs. Runyan’s art room, on a borrowed Duncan Imperial, it happened. I twitched at just the right instant, and the yo-yo crawled back up the string and into my waiting hand. Like magic. I offered to buy the yo-yo on the spot. The owner, who was a year younger than me, thought I was nuts, though that didn’t stop him from taking the crumpled dollar I offered.

Years later, I still believe in the magic of certain inanimate objects. This is not A Zen Thing or any other sort of weird spiritual notion. It’s just that certain things are, you know, better. Like the good sauté pan. Or your best knife. I have two 10-inch chef’s knives that are absolutely identical in every respect–except that one of them is just better than the other. I don’t think I’m alone here in observing these kinds of things and how they just sort of flit through our lives.

A few years ago my wife, Lynn, brought home a spatula that she’d found on the sale table at one of the local Fashionista Outlets. I admit, I don’t usually associate kitchen gear with discounted fashion, so I was more than a little dubious, but that’s where she found it. It had a sleek, slightly modernist look to it, with a stainless steel tubular handle and a blade that was as thin and sleek and agile as a whippet. In my hand it felt light and balanced and more like a surgeon’s instrument than a kitchen tool. It also made a lovely wrang! when I whacked it on the stovetop, which I particularly liked because it made me feel like a real chef. It was perfect.

At the time, I had four or five other spatulas stashed in various drawers, but they didn’t even come close. Some were stiff and heavy, others were just plain ugly, still others were made of odd plastics that didn’t make a very satisfying noise when thwacked on the counter. I used my little beauty for everything requiring a light touch, the perfect flip, or, truth be told, when I wanted to look like I knew what the hell I was doing, seeing as it would slip unnoticed beneath a fragile egg, separate a fillet of fish from its skin with ease, and cause omelets to roll over flawlessly, just like in the illustrations from Mastering the Art of French Cooking. I also liked that little wrang! noise quite a lot.

Those occasions when it was misplaced, I’d tear the kitchen apart in a frantic search, slamming drawers and accusing loved ones of treachery until I found it. There was shouting. There were accusations. It was complicated.

Then one day, with a slight tink, it was all over. It happened while I was making a grilled cheese sandwich. Right at the point where that beautiful supple blade met that lovely handle, my little beauty broke. Maybe the blade was a little too supple. Maybe I’d pressed down a little too zealously on that damned sandwich. Whatever it was, one thing was certain. The magic was gone.

After that I went into a funk. I was searching, hoping, like a spurned lover, for just one more chance. My first stop, naturally, was the Fashionista Outlet. The store manager, who was all of 14 years old, asked if this “spatula thing” was part of the new Jimmy Choo collection, at which point I walked out massaging my temples. From then on I decided to concentrate my search along more traditional lines. If there’s a kitchen shop within 200 miles of where I live, you can bet I’ve sidled up to their wall of implements and hefted, flexed, and surreptitiously whacked each spatula, hoping for that happy little wrang! Nothing. I’ve pulled store clerks aside and asked if maybe they had any others, perhaps tucked away somewhere in the back? “No,” they always said with emotionless finality. Then there’d inevitably be an uncomfortable pause while I stood there, forlorn, looking at them before I shuffled off.

I endured two years of this. Actually, I should say we endured this. The entire while Lynn pretended all of this was perfectly normal behavior, bless her.

I finally found what I thought I was seeking last fall, wandering around down in Portland with some friends. It could’ve been at a kitchen place, it may have been a bookstore, I don’t really remember the details, I was just so deliriously happy. The spatula looked exactly the same–the same tubular handle, same supple blade, same sleek look–except this model has the manufacturer’s name helpfully printed on the handle. I bought it and brought it home and, for the last few months, we’ve been getting to know one other. To be honest, it’s a little like trying to fall in love with the twin of the girl who jilted you. It may look identical, but the handle and balance feel only vaguely familiar and there’s something off with the blade. The suppleness isn’t there, the flexibility is different, and when I slap it against the stove it calls out with more of a brank! The magic just isn’t there. My heart weeps.

I still have the broken pieces of my original stashed in a kitchen drawer. Perhaps, if they’re really as magical as I think they are, they’ll heal themselves.

Editor’s note: We suspect that Casner isn’t the only one to have a deeper-than-rational attachment to an inanimate kitchen object. Tell us yours.