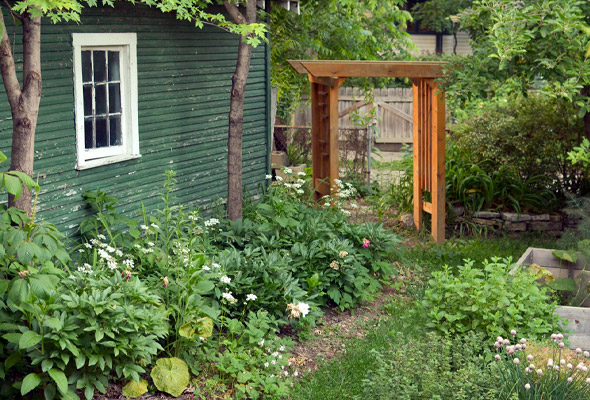 On a rainy afternoon last June, I stood over a muddy pile of weeds, cleaver in one hand, murderous purpose in the other. Garlic and a sauté pan waited indoors. This was my first attempt at gardening, and I was having a moment of communion with my most primitive self.

My husband and I had been seeking a comfortably liberal, homey neighborhood, a place where rain barrels nestled below drain pipes and front yards sported sheaves of kale. We found just such a place in urban Ohio, and not a moment later I coveted a garden. It was utterly logical, a natural response to the locavores’ call to grow what we eat and eat what we grow.

Mike, my husband, was raised in the ’70s by two organically minded graduate students, so he was eager and amenable, visions of tomatoes practically dancing above his head. We took stock of our rental yard, a tenth of an acre that bore the scars of previous tenants’ attempts to enjoy, variously, an English flower garden, a tiny apple grove, and a formal parterre of rescued Christmas trees, each now neglected. We spoke of north-south orientations and discussed watering plans. We paced out our beds, blank slates of edible promise. My husband amended the Ohio clay with “Mel’s Mix,” a blend of peat moss, vermiculite, and inexplicably expensive composted cow manure. I paged through glossy seed catalogs and placed ambitious orders. We fingered lines in the earth and dribbled in seeds. Tiny forms rose to the light as if by magic.

Other things rose as well. Dandelions were the first surprise guests to bloom, cheery and sinister. And they were only the beginning. To our dismay, ranks of uninvited crabgrass advanced on our precious heirloom tomatoes, and our baby Thumbelina carrots struggled beneath an ambush of morning glories and bindweed.

I’d spent summers nurturing patio tomatoes crouched in barrels and the odd pot of basil, but these casual experiences hadn’t—couldn’t have—prepared me for gardening in the open soil. When a tomato lives alone in a box, you are a god to it. You tenderly water, feed, and turn it to the sun. No plant can avoid solipsism when grown in a box, as there’s nothing to compete for legroom. Whereas weeds, the agnostics of the plant world, make their way with no help from anyone at all. Out here in the open soil, it’s anyone’s game.

My dream, fueled by perusing web sites and paging through catalogs late at night as my husband slept beside me in our winter bed, was that our garden would be a showpiece. More than once I caught myself standing in the kitchen, lost in reverie, on my arm a rustic farm basket brimming with fistfuls of lettuce and sorrel soon to land on my guests’ plates.

The weeds fought this fantasy at every turn, overrunning the kale and smothering the tomatoes. They quickly multiplied, presenting unpleasant surprises daily. My once virtuous gardening endeavor, so promising, turned grim in the face of these invaders, among them comfrey, pokeweed, and bishop’s weed, as well as colorful and tireless morning glories. The worst of all, I soon discovered, was burdock.

The first sign of this intruder was a ruffled, even beautiful, leaf that had unfurled behind the salad beds. Pat, our aging hippie landlady and guru of all things wild and cultivated, had stopped by and taken notice. She still used our yard as a refuge for plants drowned, crowded, abused, or otherwise rescued under cover of darkness from affluent but neglectful yards. She’s always happy to lend sage advice in exchange for a beer.

“Oh, burdock,” she said. “That’s not to be encouraged.” This is Pat’s shorthand for anything nasty, brutish, or invasive. Shovel in hand, I attacked. But I was too late. Burdock was buried up to its neck in every inch of that garden bed.

Battle rage came over me like a red haze. I thumbed through plant guides and trawled garden websites searching for a burdock kill-all, only to discover that this weed was better adapted to my garden than I was. Burdock thrives spectacularly in thoughtfully prepared garden humus. Gardeners in Europe, China, and India suffer it. Japan, too. The plant even has, as weapon, burrs that latch onto clothing, fur, bare skin. When a Swiss inventor looked at them under a microscope, their intricate tenacity inspired him to create Velcro. Hummingbirds, lured by burdock’s brilliant buds and caught in those hooks, die slowly, needled through the throat.

My husband looked upon my growing burdock obsession with mild amusement. Now and then he’d take a halfhearted swipe at the weed when he needed catharsis, but his outlook on the yard—as on life—is sunnier than mine. For him, the landscape is mainly a place to be soaked up. “So the weeds grow,” he said. “We’ll pull them when they get too bad and enjoy the garden the rest of the time.” To me, this was impossibly optimistic.

In the midst of this struggle, I happened to stumble upon burdock root in the produce aisle of our local organic grocery store for $5.99 a pound. I was struck dumb at the sight of my enemy commanding such cash.

I went back to the books, this time with a different intent. I found that Japanese cooks, who refer to burdock root as gobo, slice it alive and stir-fry it with sesame, mirin, and soy. Herbalists go it one better, relying on burdock as both aphrodisiac and tonic. “Burdock’s ethereal fire fuels all the organic processes, thus improving, cleansing, and toning the whole body,” promised my source.

I wasn’t keen on the idea of ethereal fire in my organic processes, but whatever. By now I’d bent to the task. I would vanquish my foe in familiar territory: my kitchen.

That afternoon I raked through a pile of young burdock shoots I’d pulled earlier in the day. The few pale roots I found were too skinny to be worth cleaning and cooking, which led to disturbing visions of so many more roots left below ground, waiting to emerge like vampires from their coffins.

I’d whacked enough plants to have a pile of muddy stalks, though. For help—and moral support—I turned to The Wild Vegan Cookbook by “Wildman” Steve Brill, a naturalist and urban forager who offers recipes for every part of the burdock. I took up a handful of stalks to inspect. They were veined with white and green, violet blushing at the bottoms, leaves hanging limp. Their celery-like appearance seemed familiar enough. Stalks it was.

I hefted my cleaver and hacked away, slitting the leaves from the stalks and tossing the former on the compost heap. (I’d read someplace that some hardy souls like the leaves in salads, but most consider them too tough for any creature but goats.) Brill advises peeling the stalk to rid it of the bitter skin. Easier written than done. Burdock stalks are flared and crimped, like the top of a celery stick. Getting a peeler into that indentation proved difficult. Using a French peeler with a single fixed blade and a sharp tip, I went at each stalk with a jerk of the wrist, flicking away splinters of mulch as well as a translucent grub which then gyrated across my cutting board.

Impatient to taste my spoils, I popped a half-moon of raw, peeled stalk in my mouth. It had an initial burst of lemony freshness, a celery-like bite, and then a ringing bitterness that settled down to stay. Not promising. I dumped my scant cup of sliced stalks into a saucepan and watched as they bobbed in the boiling water, which turned a brilliant yellow-green. After I’d drained the softened stalks, I noticed that they, too, were alarmingly fluorescent. Not promising at all. But I was determined to see this thing through. The recipe called for tossing the stalks with garlic that had been sautéed in a little olive oil and some fresh oregano, to which I added a quarter cup of water and a splash of red wine. Then I waited while this bubbled down into a glaze.

By the time I turned off the stove, the burdock had darkened and was no longer a garish spectacle. My enemy lay there, cooked in a steaming pulp, a pile of silken, garlicky garden weed.

I took a bite.

There’s no other way to say it. It was delicious. The bitterness had disappeared and a vegetal taste melted over my tongue, similar to that of a steamed artichoke heart but wilder, with a haunting greenness. Even in death this weed tasted more alive than my tomatoes, my kale, my cosseted herbs.

I gave my husband a bite. “It tastes like a cross between celery and mashed potatoes!” he pronounced. Two well-domesticated vegetables. It seemed a fitting end. There were no ethereal fires burning within us that we could tell, save for the satisfaction of a minor triumph. We ate our vanquished nemesis with quiet pleasure.

It was a moral victory, not a tactical one. The hordes of weeds paid not the slightest attention to their fallen comrades. I now know that there will always be more burdock, although I doubt I’ll cook it again. I’m long on practicality and short on time, and besides, artichoke hearts come cleaned and frozen.

I remember the thrill of its taste, though, as I gaze at my garden with its ragged signs of wars left to be fought. Sometimes I wonder if my husband’s easygoing attitude is saner than mine. To me, gardening is a bitter, unromantic war, fought in mud and pollen with shovel and cleaver. The irony is that after so much anxiety and worry over my delicate seedlings, cooking and eating this wild weed has given me the greatest satisfaction in my garden, and maybe taught me a measure of balance. A long history of cunning cookery reveals itself here, with weeds in aggressive edible abundance and ripe for dandelion wine, lamb’s quarters salads, stinging nettles soup, and sautéed burdock.

No matter who wins this struggle, weed or me, there’ll be plenty to nourish me for the struggle ahead.

Faith Durand is executive editor of The Kitchn. She's also a food writer, recipe developer, and author of the forthcoming Bakeless Sweets, a cookbook of puddings, icebox cakes, natural fruit jellies, and other bakeless desserts (to be published by Stewart Tabori & Chang in spring 2013). She lives in Columbus, Ohio, with her husband Mike, a sink full of dishes, and a very unruly garden.