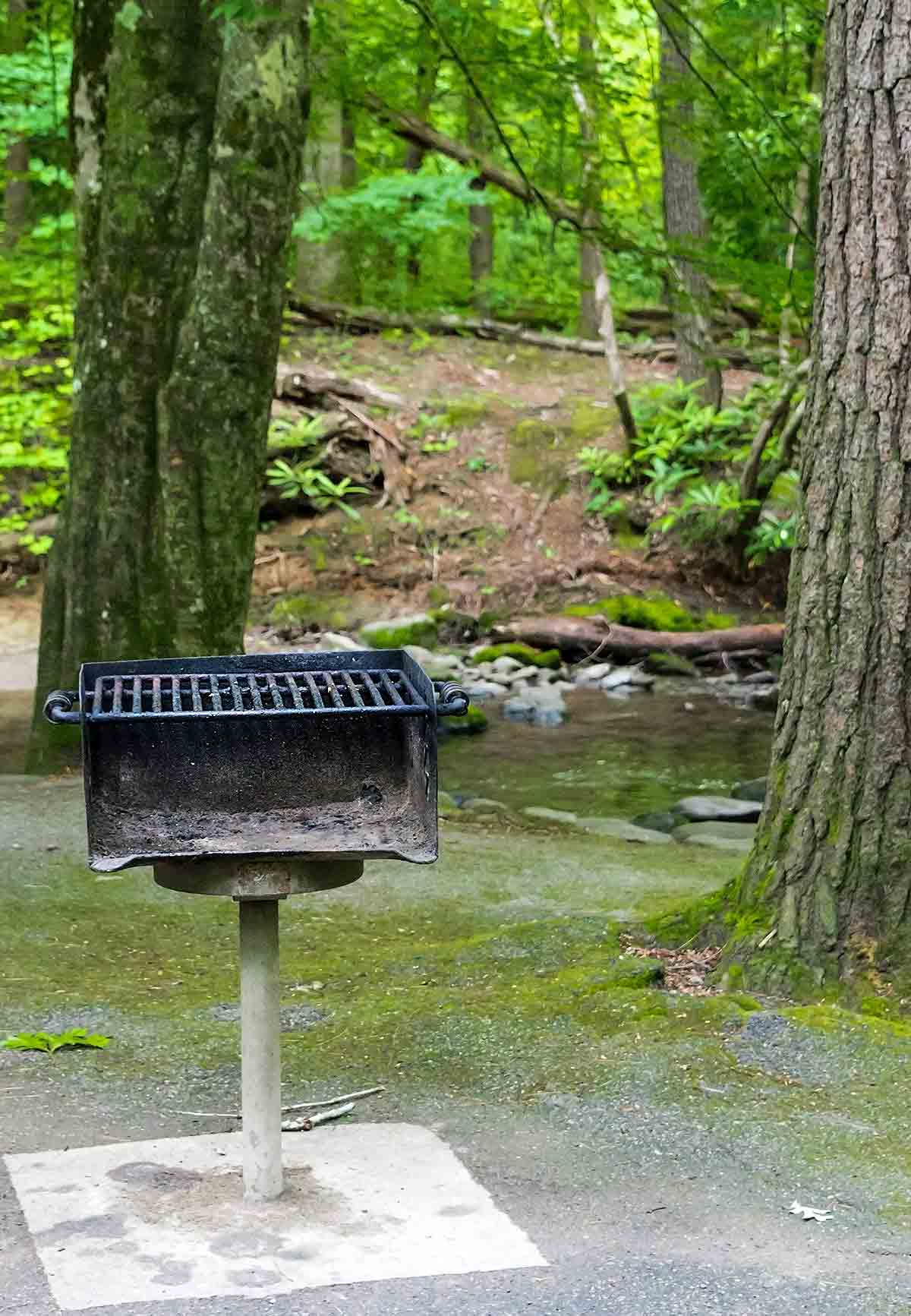 Never again. That pretty much sums up my attitude toward grilling.

I’m aware that this sentiment verges on blasphemy. Grilling is an unassailable cornerstone of the collective American summer lifestyle. Evidence of this inundates my inbox beginning a month or so before Memorial Day, when every newspaper, glossy magazine, and food-minded blog trumpets the virtues of this backyard ritual. Seductive photos of classic burgers, home-smoked oysters, and everything in between beckon to me, as do the accompanying recipes, touted enticingly as “foolproof” or “effortless,” often with “secrets revealed.”

This would all be smashing were it not for the fact that I live in a second-floor apartment in Brooklyn. I’m fortunate enough to have a 10-by-4-foot outdoor space that I’ve generously dubbed a “terrace,” although technically it constitutes my downstairs neighbor’s sloping roof and requires that I crawl out my bedroom window. Even if I were crazy enough to want to sweat over a smoldering flame while the heat index hovers stickily in the 90s, I’d be flirting with a wallet-draining fine, thanks to NYC Fire Code statute 307.5, which stipulates that any open flame within 10 feet of a building is a big, big no-no.

Still, each summer those recipes send out a siren call I find difficult to ignore. And so shortly after moving in eight years ago, I was tickled to learn that there was an alternative to this grill-less existence. There were, I discovered, public grills situated throughout the five boroughs’ parks. To me, these communal grates seemed the culinary equivalent of New York City’s public transportation system, and I fell for them with all the enthusiasm and ignorance of a recent transplant to the city. Smitten, I extolled the ease and charms of public grilling to all my backyardless friends and promptly received RSVPs from more than a dozen of them for a barbecue in Brooklyn’s Prospect Park.

I threw myself into entertaining mode, lingering over recipes in cookbooks late at night, pondering clippings from magazines during lunch hour, and plotting potential menus on my daily commute. But while I was mulling over toppings for grilled pizza, my friend and cohostess Emily was pointing out the unsavory reality of pressing out dough on a picnic table. And although salmon seemed pleasingly rustic to me, Jessica, my other cohostess, questioned the practicality of struggling with 10 pounds of slippery seafood at the park. I eventually ceded my lofty aspirations to my friends’ diplomatically framed logic and settled on a rather unimaginative spread of marinated lemon chicken, Italian-style potato salad, plump kielbasa and bratwurst sausages from the eastern European butcher in our neighborhood, vegetables from my local Greenmarket, and a little something sweet.

I hadn’t really thought beyond ingredients in terms of what we’d need for our BYOB outing. But according to Emily and Jessica, we’d be lugging not just a cooler and charcoal, but assorted cooking tools, condiments, water jugs, chilled white wine, and at least a sixer of beer. (We New Yorkers may respect the fire code, but we tend to ignore rules on public alcohol consumption.) I’d been pining for a juicy peach pie or cobbler, but since that would require two hands to transport to the park—two hands that had many, many other things to carry—lemon bars in a covered, stackable 9-by-13-inch baking pan it would be.

None of us had a car, but we were young, strong, and the owners of granny carts, those rickety wire contraptions on wheels that no self-respecting twentysomething would be caught dead pushing save for those in New York City. I even did a trial packing run the night before, mindful of my stepfather’s advice that the heaviest items ought to be at the bottom…except for the smallish cooler that I’d borrowed from my neighbor, which was by far the heaviest thing. There wasn’t a chance of fitting it anywhere except perched slightly lopsided atop my cart, held tight with my yoga strap.

A barbecuing Brooklynite had tipped me off to the fact that securing any of the dozen grilling sites in the park is a competitive, stake-your-claim situation with nothing so civilized as advance reservations. So, at 7 a.m. the next morning, the air already humid enough to frizz my hair, Emily met me at my apartment to help haul. What last-second items we couldn’t cram into my cart—by now so overburdened that it refused to steer straight—we shoved into grocery bags as we rushed out the door.

I live a mere mile from the park, but getting there by public transportation requires taking two buses. Funny, I actually hadn’t noticed there being steps on buses until Emily and I stood at the bus stop, staring at the three looming stairs and wondering how to wrestle our teetering cart up them. We somehow managed, despite countless disapproving glares from our fellow passengers and a pitying look from the bus driver. A few minutes later, when we’d reached our first stop, we reversed the fumbling. We then repeated our comic routine with bus number two.

The bus dropped us at the entrance to the park just before 9 a.m. We trundled in, lagging behind other would-be grillers whose professional-grade dollies were expertly stacked with crates, coolers, and cases of beer. These seeming regulars made beelines for “their” sites, leading a disgruntled Emily and me to accelerate our pace—and our sense of panic. As we trolled for a grill, we noticed that several savvy parties had sent someone ahead to lay claim to a particular site by reading or napping on a nearby picnic table. Other tables were covered with a picnic cloth and a telltale sprinkling of dew, with barely hidden bags of supplies underneath, making me wonder whether these people had raced to the park at the first hint of daylight and then gone back to bed, or just stashed their parcels the night before, entrusting their fate to the capricious gods of public grilling (not to mention the voracious squirrel population). In the end, we commandeered the least desirable grill in the park, farthest from the path, lacking any shade whatsoever, boasting a two-to-one ratio of dirt to scraggly grass, and situated 10 minutes from the nearest bathroom. Clearly, we were rookies.

Still, we’d snagged a grill. A shoebox-sized grill that seemed to have been stuck on top of a pipe, but a grill nonetheless.

Neither of us uttered a word to each other, even though Emily had been burbling with chipper early morning chatter just an hour before. When a frazzled Jessica, pushing a squeaking granny cart teetering with her share of the supplies, finally found us, I gathered from her curt hello that she resented our not having landed a better site. By the time our guests started trickling in an hour later, each sipping an iced coffee and bearing a single measly bag, I was itching to get grilling. We fell into traditional roles, the ladies tending to prep work while the guys fumbled with charcoal and lighter fluid. Turns out we were all suburban emigrants, raised by the creed of the grill but never before tasked with manning it. A chest-thumping debate over the best briquette strategy quickly broke out.

“We should build a pyramid.”

“What about those cone-shaped things—shouldn’t we have one?”

“We can make one out of beer cans, no problem.”

I was getting anxious. It took more than 45 minutes, a couple of singed fingers, and most of the bottle of lighter fluid to get the coals lit. This was followed by more pontificating about how long to wait before grilling and where exactly to place the food. Never a fan of the democratic process, I became increasingly impatient with each minute that escaped without the melodious sizzle of fat dripping on charcoal. The romance was waning.

As I waited and waited for that climactic moment when meat met barbecue, I finally understood why my parents swore by their electric grill. There is nothing appetizing about the smell of kerosene.

Still, even as I sat there inhaling carcinogens and, later, babysitting the crowded pieces of chicken that were taking an eternity to cook, I was reluctant to abandon my fantasy. Everything’s supposed to taste better outdoors, especially when you’ve slaved over it yourself, right?

I wish. Any potential sparks that lingered between girl and grill were doused by our ineptitude. The meat, cooked in microbatches due to the minuscule square footage of the grill, verged on being desiccated from all the rearranging and poking to check for doneness. After all that interminable waiting, each menu item ended up at the same icky, indeterminate, bacteria-breeding temperature. Worse, what little wine remained was warm. The last flicker of my enthusiasm was trounced, quite literally, by the barely apologetic Frisbee player who, in his haste to make a catch, stumbled smack into the middle of my lovely lemon bars. Into the garbage went the one thing I still wanted to eat.

The lazy, blissed-out scene I’d imagined courtesy of all those magazine spreads—the dappled shade, the meandering conversation, the meal slowly savored, the easy laughter over perpetually cold cocktails that glistened with condensation—failed to materialize. By 3 p.m., all I could think about was making my escape from the jumble of sticky dishes, empty containers, and beer bottles. However, seeing as that wouldn’t be appropriate behavior for an adult, much less for a proper hostess, I reined in my pending tantrum and instead began motions toward packing up. No one paid me any attention. Even as I pointedly began yanking the picnic cloth away, my guests were intent on lingering. “Stay,” they urged. “Have another glass of wine.” I didn’t want a glass of tepid wine, thank you very much. I wanted a cold shower, a frosty beer, and, most of all, for the day to not have been a complete and unmitigated disaster.

I’m not ashamed to admit that I fled, granny cart in tow, and flagged a car service at the nearest corner of the park. Ten bucks extraordinarily well spent.

I’ve not touched a grill since that day. Nor do I intend to ever again, at least as long as I live in the city. I’ve landed on other solutions to the no-grill-at-home situation. One is to befriend people with backyards, wrangle for invitations to barbecues, and then always bring lots of alcohol and always, always offer to help clean up, thereby ensuring future invitations.

The other is my default summer meal, the one I lapse into when the rest of the country is firing up the grill: guacamole with chips. It’s almost effortless, goes perfectly with a cold beer, and requires no commuting, fanning of flames, or advance planning (beyond finding a ripe avocado). It’s also easily portable, allowing me to dine on my front stoop, basking in the urban experience. Sometimes as I sit there, I catch a whiff of the grill from my neighbors’ backyard. Then I smirk and have some more guac.

Brooklyn-based writer and cultural omnivore Alyssa Alpine regularly contributes to Flavorpill and Culturebot, covering performing arts, food, and all manner of topics in between. She finds a well-stocked refrigerator deeply reassuring.