Christina Tosi’s recipe for cereal milk is beloved. If you’re not from North America, you may not be as nostalgic about Saturday morning cereal and cartoons as we are. But we very nearly guarantee that you’ll still love this recipe as much as we do.

Cereal milk is my homage to steeped milk.

When I worked at wd~50, we played around infusing milk with all kinds of ingredients–grains, spices, just about anything. Some combinations worked better than others. Some were good, like sesame ice cream. Some were epic, like toast ice cream. (Imagine a perfect piece of diner toast–golden brown, crisp but not so crisp it scrapes the roof of your mouth, saturated in lightly salted butter–and now imagine that as an ice-cream flavor.)

The seed for it was planted when we were preparing for our spring-to-summer menu changeover, and the then-chef had cornbread ice cream on the mind. I probably made 10 different versions of homemade cornbread, but we couldn’t get the corny flavor and guilty pleasure of piping-hot-out-of-the-oven-Jiffy-corn bread just right with my homemade versions. What we got instead were a lot of infused milk tests that all tasted like lame versions of cereal: one tasted like Kix, one like Corn Pops, one like Rice Krispies, one like Special K. They weren’t what we were looking for. But, for whatever reason, I felt like I’d learned a secret: milk infusions could hit as close to home as the bottom of my cereal bowl and I happily gulped each failed cornbread milk turned cereal-flavored milk. I filed the idea away deep in the vault and got back to work.

The idea resurfaced when we were opening Ko and our dessert menu had nothing on it. And the new freezer that was supposed to hold the ice cream for that nonexistent dessert menu was on the fritz. The hype was unbearable, and I was screwed. I needed a dessert, period. A backup dessert would be nice too. And if I was smart about it, it would be one that didn’t need to be frozen to be good: panna cotta fit that bill perfectly. Now, making a good panna cotta–creamy, set just enough to hold its shape but melt in your mouth–is pretty easy. But making an interesting panna cotta–that’s the hard part.

I knew what I had to do. I had been training for this moment for years: do a milk infusion. I gave the cereal milk idea a shot. Bull’s-eye. Everybody loved it. The funny part is that we worked backward from there. My intention was only to make a cereal milk panna cotta. But owner David Chang, pushy, pushy man that he is, forcefully reminded me on many occasions that I should, at the very least, make cereal milk into ice cream. We simplified it even further, too, to create a line of flavored cereal milk to sell at Milk Bar. We make our cereal milk with classy old Corn Flakes, but we’ve also been known to steep Fruity Pebbles, Cap’n Crunch, and Lucky Charms. (See “Cereal Milk Variations” following the recipe.)

Regardless of whether cereal milk is the beverage for you, the technique–steeping and seasoning milk, then using that milk to make desserts–is a versatile one that exists in pastry and savory kitchens all over the world. It’s a technique that’s simple and totally accessible in your own home kitchen as well.

This was by no means the first recipe that came out of our kitchens, but it is far and away the most popular and what we are known best for.–Christina Tosi

Yes, cereal milk. So simple. So unabashedly retro. So sinfully indulgent. And so brilliant as to belie the childlike genius of the pastry chef who conceived it. Although cereal milk may sound mundanely like what you’d pour down the drain from your seven-year-old’s breakfast bowl, this incarnation is actually quite a lot more inspired than that, with a rich, sweet complexity that we’d never dreamed could be derived from a box of Corn Flakes. Or Fruity Pebbles. Or Cap’n Crunch. Or just about any cereal you crave. The sweetly steeped milk is seriously stunning just sipped on its own, though don’t doubt its transformative abilities when shaken into a White Russian, whirled into ice cream, transformed into panna cotta, or in just about any other thing calling for plain old milk. And should you find yourself contemplating boxed breakfasts of yore as you sip your cereal milk, we urge you to take a twirl through The Great American Cereal Book, from which the above photo is taken. Its quirky look at iconic cereals from the past century and all manner of related factoids and ingredients, from bran flakes imbued with vitamin B1 to pastel marshmallows, make for some truly scintillating cocktail party chitchat. 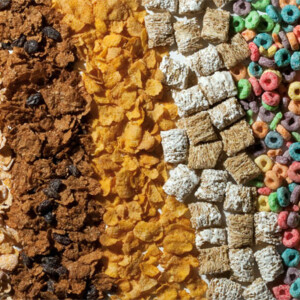 Drink cereal milk straight, pour it over more cereal, add it to your coffee in the morning, or turn it into panna cotta or ice cream. Cereal milk. It's a way of life.
Prep 15 mins
Cook 15 mins
Total 30 mins
Drinks
American
4 servings
231 kcal
5 from 1 vote
Print Recipe 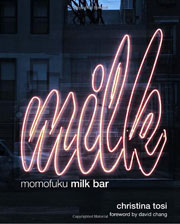 There is really nothing much to say other than, why didn’t I think of this?! It is plain delicious straight out of the fridge. I originally planned to make ice cream and maybe a White Ruskie. So, I made 1 1/2 times the amount. Unfortunately, my two boys and I polished the whole thing off before I got a chance to do anything. I ended up making another 1 1/2 batches to make the ice cream and the drink. I made both the regular Corn Flakes version and the Cap’n Crunch version. Both are excellent, but the Cap’n Crunch one needs no extra sugar at all—I’m glad I tasted it before adding the 2 tablespoons of brown sugar. Cap’n Crunch is much sweeter than Corn Flakes and made the cereal milk perfectly sweet with no added sugar.

Even though I live near the Momofuku bakery, I had never tried the cereal milk, as I couldn’t quite see the point of paying for something I could make simply by neglecting a bowl of cereal for a couple of hours. Having tried this recipe I am now even more dead set against buying cereal milk because it is so incredibly easy and delicious to make at home. I used Grape-Nuts, because that’s what I had on hand, and the result was pretty fantastic. The addition of salt and brown sugar pushed the recipe over the edge from something a bored child could make to something approaching, if not genius, exactly, then uncomplicated bliss. Also, I didn’t compost the cereal or feed it to my dog. I ate it, and it was delicious.

This milk surprised me. I thought it would just taste like the end of a bowl of cereal, but the milk had a lot of depth and richness to it. While I probably wouldn’t drink a glass of it on its own, it is an amazing addition to ice cream and smoothies. I also liked that it could be made well in advance.

This was fun and easy to make. I chose the regular Corn Flakes version and used the results for straight-up drinking, a White Russian, and ice cream. (I didn’t use the recipes from the book for the drink or ice cream though, because I didn’t have gelatin.) But the flavored milk worked perfectly well in standard White Russian and ice-cream recipes.

Normally I am one of those people that like cereal to stay crisp and don’t like the leftover milk in the bowl. But I made the cereal milk with the Corn Flakes, which are good after they are baked. The cereal milk was really tasty.