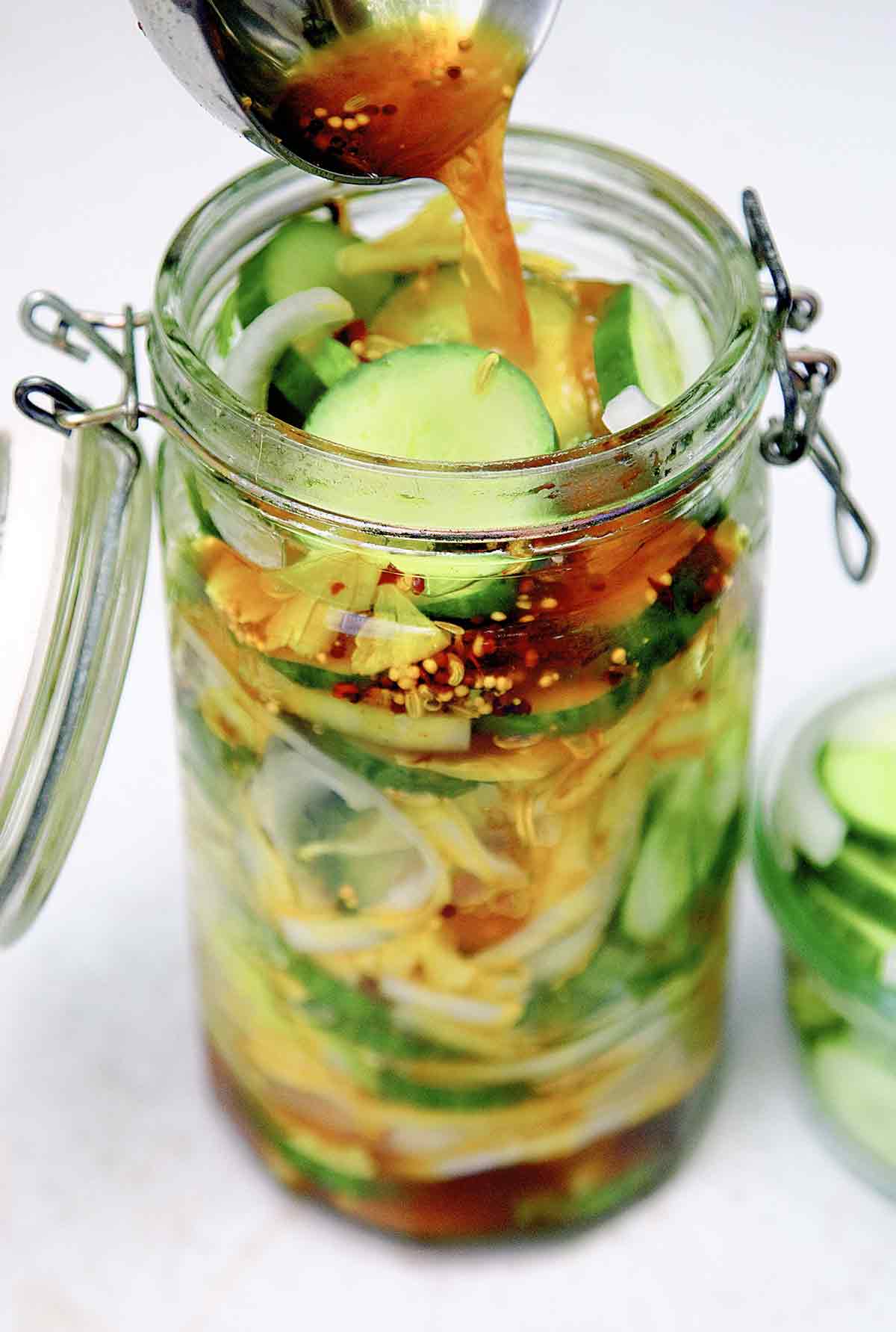 Adapted from Hugh Acheson | A New Turn in the South | Clarkson Potter, 2011

In our experience, people pretty much prefer the sort of pickles they grew up with during childhood.

These bread and butter pickles are not the pickles for those people.

These are pickles for the open-minded. Tons more taste than store-bought pickles. Not a lot of effort. And you can make these as quick pickles, meaning you can simply put them in the fridge and consume them within 10 or so days, or you can process them the old-fashioned way in jars and put them up for next winter. That’s to say nothing of the intriguing taste taken from the pickling liquid being infused with Vidalias, turmeric, mustard seeds, and allspice,  among a few other surprises, including fennel seeds. (Which makes us wonder, wouldn’t some slivers of fresh fennel be lovely pickled like this?!) While we’re on the topic of pickles, we’ve no idea where the saying “in a pickle” comes from, though we have to say, we’d love to find ourselves in a jar of these slightly sweet specimens. Originally published August 7, 2012.–Renee Schettler Rossi 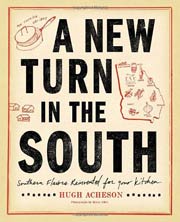 Rinse the cucumbers under cold water and then slice them into rounds about 1/3-inch-thick rounds. Peel the onion and slice into 1/3-inch-wide strips.
Mix the onion and cucumbers in a medium bowl and add half the kosher salt. Toss well and let the cucumbers rest at room temperature for 1 hour.
Dump the onion and cucumbers into a colander and rinse well under cold running water to remove the salt. Tear the celery leaves over the mixture and toss everything to combine. Pack the cucumbers, onion, and celery leaves into clean pint jars.
in a nonreactive pot, toss the remaining salt, red pepper flakes, fenugreek, fennel seeds, turmeric, mustard seeds, allspice, vinegar, sugar, sorghum, and cold water. Bring to a rolling boil and then pour it over the cucumber mixture, divvying the spiced liquid evenly among the jars. Screw on the lids, leave the jars out on the counter for 2 hours, and then place them in the fridge.
At this point, the pickles are pretty much done, but they’ll be at their best a day or two later. The shelf life for these quick pickles—if you made them as directed here, without the hot canning process—is about 10 days. If you’d like the jars to keep for the long haul, follow your jar manufacturer’s directions for canning.
Print Recipe

These bread and butter pickles are a keeper. I used a Vidalia onion, the celery leaves, the pepper flakes, and maple syrup. Everyone loved them! It could only be a problem for someone who didn’t have the small amounts of fenugreek, turmeric, mustard seeds, and allspice berries on hand. Buying all of these could make these costly pickles. And beware the stains from turmeric. I spilled a little of the marinade on my counter and got a stain, which has faded. But these will definitely be repeated—it's nice to bring a jar of these to a picnic party.

Wow! I’m still amazed that I made pickles. This was crazy easy (aside from finding the fenugreek, but I lucked out at a European market not too far from my house) and came out so awesome! I let my girls help me to make the recipe, and they kept telling me there was no way this was going to come out as pickles. And day by day as we looked at them, they started to look more and more like the real thing, and we were all amazed together.

Not only are the pickles delicious, but I thoroughly enjoyed eating the onions as well. Everything came out wonderfully.

I brought the pickles to a barbecue, and when I told everyone I made the pickles, they were all impressed and all gave them a huge thumbs-up. I’ve raved about these bread and butter pickles to everyone I know, and they will definitely be in my regular recipe rotation! So happy to have tested this one.

Oh, and I should note, I didn’t add the red pepper flakes because we’re not really spicy people, but I’m sure the pickles would be fantastic with this addition.

The bread and butter pickles recipe makes a good and very nicely spiced pickle. I normally use a simpler recipe with only some turmeric and allspice berries for seasoning. So, the extra spices in this one were a good variation, giving the pickles an exotic fresh flavor. I did change one step a bit though. Instead of pouring the boiling-hot pickling liquid on top of the cucumbers, I allowed it to cool down a bit first. I always do this to help keep the cucumbers as crunchy as possible.

These bread and butter pickles are delightful and easy to make. If you take the non-canning option, you can have picnic pickles for the weekend in the space of a single evening.

The only holdup to putting it all together quickly is not having some of the spices on hand. Try to include the celery leaves and red pepper flakes, and be sure to use real maple syrup—it brightens the agrodolce (or sweet-and-sour) aspects of the brine. Compared to store-bought pickles, you can taste just about every ingredient in every mouthful. This recipe should become a classic.

Back to Bread and Butter Pickles on Leite's Culinaria