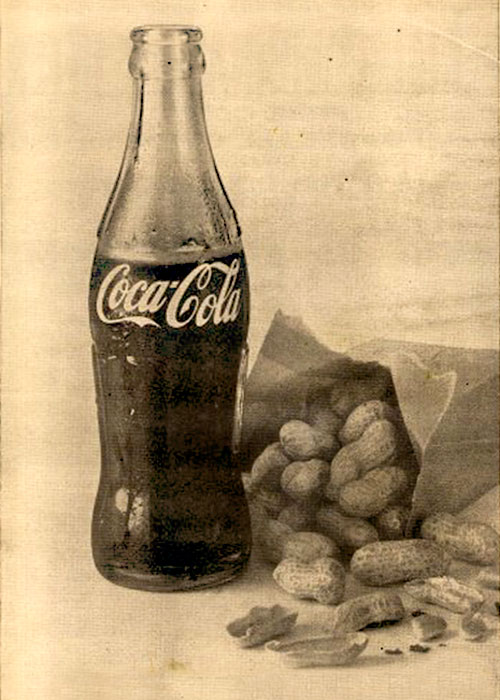 Back when I was a preschooler in the ’60s, I’d beg my daddy to let me tag along with him on his weekly trips to the farmers’ co-op in town. Okay, I didn’t so much beg as I did scurry into his truck and wait with the certainty that he couldn’t possibly say no. The reasons behind my insistence on going along on this excursion were twofold. It was an escape from our quiet Tennessee farm for a taste of the city (Kenton, population 1,495 at the time), an outing I otherwise made only on Sunday mornings, when we went to church and everything else in town was closed. It also meant I got to indulge in my Coke-and-peanuts habit.

Daddy and I would pull into the gravel lot of the co-op, park alongside the other dirt-encrusted pickup trucks, and make our way to the low building with a dull corrugated-metal roof and walls that smelled of burlap and old wood. There we’d find a handful of farmers sitting around, their tractor allegiances displayed on their caps. (My daddy was a John Deere man.) Aside from selling seed and fertilizer, the co-op constituted the only social outlet most farmers had outside of church. We usually found them discussing crops, either mourning the lack of rain or lamenting its excess. It wasn’t a place to linger all afternoon. Just a place to sit for a spell.

But before taking a seat on the odd chair or packing crate, my daddy, just like every other farmer, would first drop 15 cents into the cigar box on the counter. He’d pull a glass bottle of Coke from the chest-style vending machine that’d forgotten how to accept change and grab a pack of Lance’s Spanish-Roasted Peanuts from the rack on the wall. Then he’d lean back and luxuriate in the break from the vagaries of an occupation that relied on the good graces of the Lord, all while taking part in one of the South’s true culinary eccentricities.

The ritual, a sweet Southern tradition, is simple: Open the bottle of Coke and take a couple of swigs. Tear off the corner of the cellophane sleeve–one of those single serving-size packages that contain no more than a handful of peanuts, the ones with the rusty skins still attached–and shake some nuts into the bottle. Then drink. The first few sips are the best, when the Coke is at its coldest and the peanuts at their salty crunchiest. If you linger, the Coke gets warm, the peanuts turn soggy, and the whole thing is about as appealing as drinking from an old bottle that’s been dredged from the bottom of a pond. This treasured custom is, to us Southerners born before LBJ took office, what the tea ceremony is to the Japanese.

Somewhere around the age of six, I decided I was big enough to quit sharing with my daddy, who, I’m quite certain, was happy to be free of my backwashing ways. My first try, I grabbed both sides of the bag and ripped the top completely open, which left me with no way to corral the peanuts into the narrow bottle opening. Most of the nuts missed their mark, bouncing off my legs and onto the rough wooden floor, where they remained—the three-second rule not being applicable in a place where people wear the same boots they used to tromp through pig droppings. Sacrificing those few peanuts was just as well, seeing as I hadn’t yet figured out that I had to first sip some of the soda so as to make room in the bottle for the nuts. Still, enough of the nuts made it in for me to succumb to this early experience of mixing sweet and salty.

Witness to this first feeble attempt was our sometimes farmhand Kinch (Mr. Kinch, to me). The next time my daddy and I came in, Mr. Kinch bought me a Coke and a pack of peanuts, squatted down alongside me, and sat me on his knee. “This here’s how you do it, Sister,” he said, taking my tiny hands into his large, roughened ones and gently guiding me through the requisite steps.

It wasn’t long before I became adept at assembling this Southern-bred cocktail. Bottle in hand, I’d lean back against a mound of seed corn or cottonseed sacks, propping the rear legs of my chair the way I’d seen the men do. I’d take a languid swig and pick at the rusty red peanut skins that clung to my mouth in a studied fashion with my thumb and ring finger, imitating the grown-ups I’d seen picking bits of tobacco from their lips while smoking unfiltered cigarettes.

Coke and peanuts wasn’t something we indulged in at home. Sipping “Co-Cola,” as it was called in the South–we Southerners never having met a syllable we wouldn’t lop off to conserve energy–to quench one’s thirst was considered wasteful. My mother actually kept a couple of bottles on hand at all times, but they were strictly for medicinal purposes, much like aspirin, calamine lotion, and Merthiolate. If you had an upset stomach, Coke was the cure. Despite this, I never connected it with being sick, but rather with the promise of feeling better.

I once tried substituting canned Coke, but it was patently absurd–it’s nigh unto impossible to make peanuts flow out of a can. I’d never even consider diminishing the tradition by pouring Coke and peanuts into a glass. I don’t think people outside the South understand unless they are, in fact, displaced Southerners, but there’s something about gripping that curvy green glass bottle and tilting it just so, at that perfect 40° angle that offers up a trickle of Coke with an attendant peanut or two in each swig, that makes for one of the most satisfying sensations imaginable.

I still approach the Coke-and-peanuts ritual with reverence, though I consider myself a Californian these days. It takes me straight back to those excursions into town with my daddy, when the two of us shared a little together time riding in the pickup with the windows down, watching for wildlife along the roadside, the clean Tennessee air wafting through the cabin. Completing these trips with Coke and peanuts was ritual. Sacramental, even.

© 2012 Carol Penn-Romine. All rights reserved. All materials used with permission.