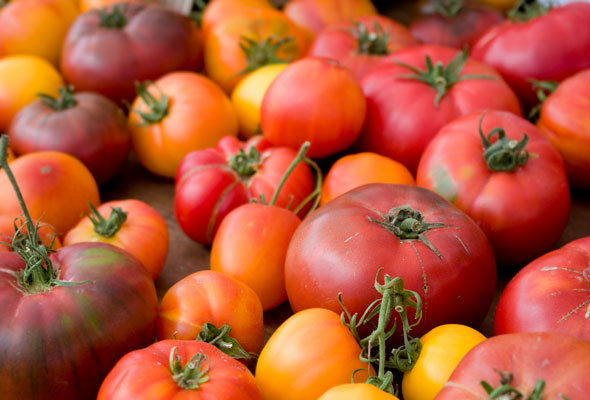 You cannot survive on tomatoes alone, though each summer I try. Beginning in July and continuing until the first frost silvers the fields, tomatoes of every shape and color find their way into my shopping basket at the farmers’ market. They come dear, but during the high holy season of the ripe heirloom tomato, I’ll pay anything to have them.

I go to the market in the early mornings, intending to buy only enough tomatoes for the coming week. But as I thread my way through the crowd, I often come across a display of real beauties I can’t pass up. Fear stirs under my ribs at the sight of them, the same fear that’s at the root of all hunger: the dread of not having enough. What I fear is that if I don’t pounce, I will have to go without, that the beauties may go into another shopper’s basket, and so I take out my wallet and buy three or four. Tiny pear tomatoes as sweet as iced tea. Red globes the size of a child’s fist. Big gnarled monsters. Russian something-or-others, all blood and smoke, that taste of the sun and the iron of the far eastern steppe. I love them all.

Up and down the aisles, I add more tomatoes to my basket, more than a little irritated when I bump into friends who ambush me for conversation and keep me from my hunt. Sometimes I’ll duck around a corner stall and head in the other direction. I’m ashamed of turning from them, the fine people of my town, but it happens instinctively, as with an animal. If I can’t avoid an encounter, I endure it with distracted impatience. “Your daughter is here from Virginia? How nice,” I might say. Or that fallback, drenched in deceit, “Call me when your company is gone, we’ll have a drink.”

If Geo is with me, I can count on him to stand pat and continue the conversation while I scurry off and resume my anxious quest, gathering what he can of local gossip and reporting back later with the earnest delight of a boy who has dug for treasure and found it. The truth is, my longtime companion is suited for sociability, and I am not. I am an introvert. I am restored by hours spent alone and by my solitary pursuits. Even when my solitude contains the usual anger or sadness or confusion that wells up when one is alone, I feel I can greet it and wrestle with it, if I have to, on the ground of my own being. Who is it that goes by my name? I know less and less about her each day. But that unending inquiry unfolds with more immediacy and intimacy when I am alone. I simply like to sit with my own thoughts, to consider and reflect. A kind of coherence sometimes emerges, a space in which no one and nothing are barred, and I settle into that. It feels like home.

Geo is an extrovert. He cannot get enough of company and talk. He comes away from big parties energized, full of insights about the people he’s met, privy to their confessions and their affairs. Ten minutes after we arrive, I am ready for home. In 62 years, I have not grasped the art of the casual opening line. In its place I have cultivated a talent for appearing riveted by the bubbles in my mineral water. When I feel I’ve given the evening a decent go, I signal Geo with one of those for-you-only signals that couples use. After the first few signals, each ever more obvious, I often stand near the door with mounting panic for a good half hour before he is able to tear himself away. Only when I pull on his sleeve and beg him in front of his new best friends does he manage to make an exit.

Despite my reticent ways, I am not without friends. I’ve been blessed with more good, true friends in my life than I can account for. But I meet them alone, or in twos or threes, or the rare foursome—no more. Then I can savor the talk, I can listen, I can shed my embarrassment at being this awkward, diffident one who fumbles her way through the markets and rooms of this world.

And then at some point the day arrives when I realize I have been too much or too long alone. I worry that my friends will have forgotten me. Some 20 or even 30 years of friendship have not changed my impression that I become immaterial to my friends if I am not in their presence. I just do not believe myself fixed in their minds, or hearts, though they give me no reason to doubt it. I’ve only to look in my own heart to see they’re secure in mine. Still, I find it nearly impossible to make the opposite leap. It’s an old habit. Maybe it’s the infant’s antediluvian dream or dread that her aloneness will seal her away forever from the Other and make her an exile to love.

When I feel at risk of being forgotten by those I love, I say to Geo that I have bought too many tomatoes at the market. Again. That they will rot if we don’t do something. At my pleading, he builds a fire under the tall fir trees, and I make my friends a salad of tomatoes, pour some wine, and serve them shrimp heaved from the Salish Sea. I have found that tomatoes, though beautiful, bare, wet, solitary, and bloody, are not enough to survive on alone. But each summer I try.

Kathryn Hunt is a writer and filmmaker who makes her home on the coast of the Salish Sea in Port Townsend, Washington. Her stories, poems, and essays have appeared in Rattle, The Sun, Willow Springs, Crab Orchard Review, Open Spaces, and Portland Magazine, among other publications. When she’s not at her desk she can be found in her garden, trying to stay ahead of the weeds and the deer.