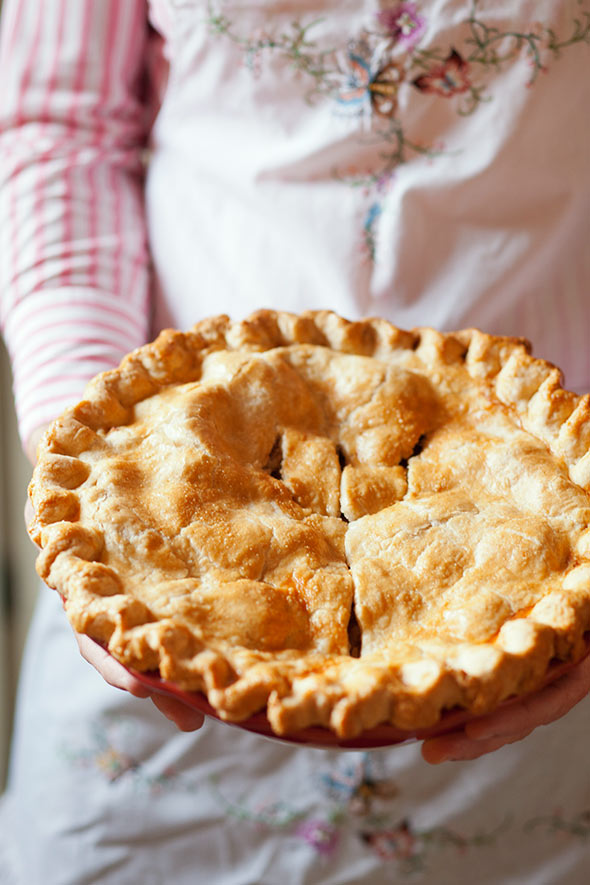 Grief doesn’t just talk. It screams. Wails. Blames. Sobs. Bakes. Yes, bakes. In Beth M. Howard’s memoir, Making Piece, she chronicles in cringe-inducing, gut-wrenching detail the downward spiral of sorrow that she succumbed to following the death of her husband—and how she eventually escaped the clutches of grief. And it has everything to do with pie Making it, not eating it. Curiously, as Howard muses midway through the book, the very act of navigating grief is quite a lot like making pie. Strawberry-rhubarb pie, in particular. “It’s bitter. It’s messy. It’s got some sweetness, too. And sometimes the ingredients get added in the wrong order,” says Howard. “Yet even though it isn’t perfect, it still turns out okay in the end.” As does Howard’s story. Readers who find themselves in tears early on—and, let’s be honest here, desperate craving pie recipes—won’t want to overlook the book’s last few pages.—Renee Schettler Rossi

If it wasn’t for banana cream pie, I never would have been born. If my mom hadn’t made my dad that pie, the one with the creamy vanilla pudding, loaded with sliced bananas and covered in a mound of whipped cream, the one that prompted him to propose to her, I wouldn’t be here. Think about it. The anatomical shape of bananas. The pudding so luscious and moist. The cream on top as soft as a pillow on which to lie down and inspire certain sensuous acts. My parents were virgins and intended to stay that way until they exchanged vows at the altar. That pie made wedding plans urgent. If it wasn’t for that pie, they may never have gotten married and had me.

If I had never met Marcus, never fallen in love with him and his almond-shaped green eyes, exotic German-British accent, and those odd-yet-elegant leather hiking boots that laced up at the sides, I never would have invited him to join me at my friends’ wedding in Tuscany. And I never would have taken the train from Italy to his apartment in Stuttgart, Germany, carrying that pie I baked him, the apple one heaped high with fruit, drowning in its own juices and radiating the seductive scent of cinnamon, the one that made him realize I was like no woman he’d ever met before and that he couldn’t live without me—the pie that prompted him to propose to me.

If it wasn’t for pie, I never would have married Marcus and moved to Germany, to Oregon, and then to Mexico with him. If I had never married him, I would not have been the one listed as the emergency contact, the one who got The Phone Call that day. I never would have learned how a call from a medical examiner can mean only one thing, how harsh the word would sound in my ears—“Deceased,” he’d said—and how that word would haunt me, change my life, change me.

If I had never been born, I never would have known what it feels like to lose Marcus, never known what his sexy, athletic body, the body I had made love to hundreds of times, looked like lying in a casket, cold, hard, lifeless, eventually cremated, his ashes buried, never to be seen again.

If only my mom hadn’t made my dad that banana cream pie.

Beth M. Howard has been a journalist for more than 20 years, specializing in personality profiles, adventure travel, and outdoor sports. In 2001, she quit a lucrative web-producing job to bake pies at a gourmet deli in Malibu, California. Her blog, The World Needs More Pie, has been featured in publications worldwide. She lives in the American Gothic House in Eldon, Iowa, where she continues to write and, during the summer months, run the Pitchfork Pie Stand.