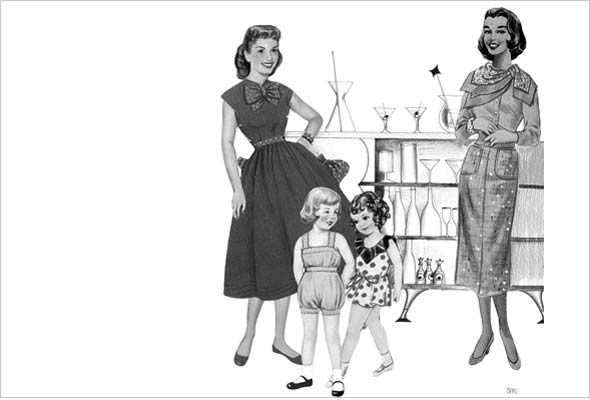 Remember back in the day? Back when you blew your budget—if you even had one—on heels and happy hours rather than soccer camp and juice packs? Back when you could knock back an ice-cold martini or three and not have to worry about slurring your words come story time?

In her smart-alecky yet no-nonsense treatise The Three-Martini Playdate: A Practical Guide to Happy Parenting, author and mother Christie Mellor commiserates with parents everywhere. Equal parts self-help book and survival guide for moms and dads, her pseudo-parenting guidebook reads sort of like a Take Back the Day rally. “There is no shame in explaining to your children that they should go and find Something to Do, that the grown-ups are having grown-up talk, that they, the little children, need to go somewhere and be little children,” writes Mellor. Yet play they must. Which puts parents in the unenviable position of scheduling forced time with strangers and mustering polite chitchat with humans with whom they have nothing at all in common. Or, as Mellor defines it, “a play date.” (It should probably be noted that the witty writer says of this, “May the chipper mommy who coined that particular term forever rot in a hell of eternally colicky babies.”) A solution to this noxious situation does, however, exist. At least according to Mellor. Read on.—Renee Schettler Rossi

I realize that the days may be over when a mother could send her five-year-old out the door with a cheerful “Be back in time for dinner!,” secure in the knowledge that her little one would wander over to some friendly neighbor’s house and get in the hair of that friendly neighbor for a while. Those days were not only good for the mommies, they were good for the inquisitive pre-K child, who could learn the geography of the neighborhood, observe unfamiliar people in their habitats, and occasionally get accidentally locked in some interesting neighbor’s bathroom. A child could ask endless questions of an adult other than his parent, an adult who might find him enchanting, an adult who might think it a real treat to have him over for a chat and possibly a cookie. A child could run over to the Worcesters’ to play “house” with the Worcester girls, or up to the Breezebottoms to play “doctor” with little Stevie, or out into the middle of the street to play “spook” until it was time to come in for dinner.

In these modern times, we have the playdate. One must schedule one’s child for a date to play with another child, usually because the child likes playing with your child at preschool, and they think they can re-create the magic in a domestic setting. Sometimes he simply wants to see what kind of toys your child has been stockpiling, or he would like to show your child his own recent acquisitions.

Occasionally my husband and I find that we actually like the child, and we hope that the parents are tolerable, as we will be forced to sit in their house making interminable small talk while the children play. More often than not, we find we have nothing in common with these people, that they have invited us only because their sweet picklepuss wants our child to come over. Perhaps they are attempting to socialize their ill-behaved offspring by surrounding him with lots and lots of nice boys and girls, and are willing to hobnob with total strangers to accomplish this formidable task. The situation is frequently as awkward as a bad blind date, and one must endure a forced, often painful gab session, attempting to answer such questions as “So, what do you do?” while discussing the ins and outs of early childhood development. Aside from simply declining every invitation and being thought of as an unpleasant recluse who keeps one’s child a shut-in, these playdates must be reciprocated, and you will, sooner or later, be expected to sacrifice some otherwise fine and relaxing afternoons to entertaining a succession of people with whom you have no shared interests mother than the fact that your children like to play together.

In the spirit of The Philadelphia Story or Auntie Mame, when forced to entertain dull or insufferable fellow parents, show off your home milieu in the most eccentric possible light. Answer the door in an orange caftan, a cigarette dangling from a long, ivory-handled holder. If you are a nonsmoker, those fake herbal cigarettes that smell like burning hair are equally effective. Invite assorted “artist” types to visit “unexpectedly.” Encourage your musician friend to swing by with his accordion. Talk about how much you are repelled by the word and the very concept of the playdate, and as a last resort, bring up a controversial political or religious topic.

If your child plays well with this particular girl or boy but you really cannot bear to sit with the parent and discuss crafts projects for the preschool one more time, suggest that the parent leave the child and come back in a few hours, giving assurances that you’ll feed the kids a nutritious snack and watch them like a hawk. Try not to make the suggestion sound as if you find this parent the most dull conversationalist in the world and you really wish she would vacate the premises before your face cracks and you throw an ashtray through the window. Make it sound as if you want to give her the opportunity to get a few errands done or browse at the bookstore, and someday she may gratefully pay you back in kind. Chances are, if you are uncomfortable, she is too, and will eagerly take you up on the offer.

If you simply don’t have the energy to parade various unsavory artistic types or the heart to play your entire collection of Martin Denny Jungle Music, I have discovered an easy and fun solution for quickly weeding out the types of parents with whom you would rather not share your afternoons. When forced into a play date situation, invite the parents over around the cocktail hour. The cocktail hour may be an hour, more or less, around four o’clock, at which time I suggest you noisily and with much gusto mix up a cold batch of martinis. This is a surefire method of separating the wheat from the chaff, the cream from the nondairy soy alternative. If, after you have offered drinks all around, the visiting parents quickly gather the child and child-related paraphernalia and run silently from your house, enjoy your martini with the knowledge that these people were not the sort with whom you would want to embark upon a long-term play date relationship. If, however, their eyes light up and sighs of relief can be heard (as well as faintly audible whimpering noises), you may have the beginning of a workable alliance.

Difficulties occasionally arise when you do end up becoming fast friends with a child’s parents only to discover later that their spawn is a horrid brat who torments your child regularly, and whom your child cannot abide. Suggest to these unfortunate people that you all get baby-sitters and have an adult evening out. Enjoy yourselves while you can, as this type of adult relationship usually does not last long, unless their child grows out of his psychotic tendencies in a hurry. Once in a blue moon there is a happy confluence, and the best of all situations is achieved: a kind, thoughtful, and interesting child, blessed with parents of the same bent. You think they’re swell and, oddly enough, they seem to think the same of you. When one stumbles upon this ideal combination, relish it, and celebrate. Keep plenty of olives and ice on hand and have them over often. For a play date.

All young children should know how to make this delightful yet deceptively simple cocktail for their parents and other thirsty grown-ups who drop by around five o’clock. Glasses should be chilled ’til they’re icy cold, and when asking about garnish preference the child should sweetly inquire, “Olive or Twist?” Grownups will think he is making a funny literary joke, and then they’ll laugh, and maybe give him a nickel.–Christie Mellor

Back to The Three-Martini Play Date on Leite's Culinaria