Veggie burgers made with mushrooms and barley are an amazing riff on the classic soup. Umami bombs in buns.

Adapted from Lukas Volger | Veggie Burgers Every Which Way | The Experiment, 2010

This veggie burger, based on the fortifying mushroom and barley soup, is simple and abundant in mushroom flavor. Substitute other mushroom varieties, such as plain button or exotic oyster, if you like. The combination of barley and ‘shrooms makes for a deliciously chewy, nutty-tasting burger.

Can veggie burgers be made with leftover cooked veggies and grains?

We gotta say, this recipe makes a ridiculously irresistible veggie burger. (And we don’t even like veggie burgers. Except for these. We swear.) To save time and fuss, we turn to this recipe those weeks when we’ve thought ahead and have some cooked grains and potatoes stashed in the fridge, which allows us to whip these burgers up in a jiffy. (Though yes, they’re eminently worth the time and dirty dishes invested in starting them from scratch.) 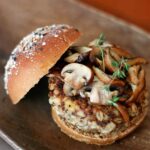 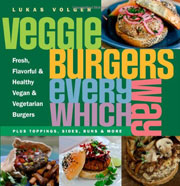 These burgers are as delicious as they are inventive, and a wonderful rebuke to the army of heavily processed, hockey puck-like soy patties that darken supermarket freezer shelves. The combination of barley, mushrooms, and potatoes is a harmonious one, and the resulting flavor is robust, earthy, and very satisfying.

These veggie burgers are relatively easy to put together, and require only a little advance planning (i.e. taking the time to cook the potatoes and barley). I combined everything by hand. A potato masher works quite well for this, by the way. I got 7 burgers out of the recipe. If I were to change anything next time, I’d use a little more salt and pepper. Otherwise, terrific!

This was the best veggie (well, technically, vegan) burger I’ve ever had. It was definitely every bit as satisfying as a meat burger. Personally, I wouldn’t eat it on a bun as it already has grains in it and besides, it was a little too crumbly to eat with your hands.

However, it made an amazing fork-and-knife meal with a dollop of guacamole. The recipe made 4 BIG burgers. And don’t peel the potato. Leaving the peel on helps the potato work better as a binder.

Mushroom and barley soup on a bun is the best way to describe the taste of this burger. Luckily my manners include a napkin on the lap so the fact that the burger fell apart while I was eating it didn’t cause too much of a mess. I didn’t think it needed a binder when I was cooking it but now I think it could benefit from a bit of beaten egg mixed in.

It’d be helpful if the recipe gave a raw volume for the barley; not sure everyone who might try these would be aware of how much barley “grows” when it’s cooked. Four dirty pots and pans, one dirty food processor, and four burgers that fell apart. Yet the taste is great. I served them with slow-roasted cherry tomatoes on top.

Despite their lack of animal protein, these burgers are satisfying to both taste buds and stomach. The sharpness and sweetness of the balsamic vinegar is quite good with the earthy mushrooms, and the barley makes meaty and filling burgers. Since the recipe doesn’t call for a typical binder such as an egg or flour, and my 3-ounce potato didn’t do much in that regard, the crust is what holds the burgers together. Flip the patties only once, and leave them alone on the skillet so that they can form a hard crust on both sides.

Because barley takes a while to cook, I suggest you make extra for later use. (Bring 1 cup uncooked pearled barley and 3 cups of water to a gentle boil, cover, and gently simmer for 45 minutes. You’ll end up with about 3 1/4 cups cooked barley. Reserve 1 cup for the burgers, divide the remainder in half and freeze it.)

This was a nice, meaty, robustly flavored burger which was both filling and satisfying. As I can’t eat gluten, I substituted steel-cut oats for the barley. It worked out well in texture and taste since there are so many other strong flavors. I loved the balance the balsamic vinegar brought to the otherwise earthy and alkaline ingredients.

One thing I might do next time is, instead of cooking the sliced mushrooms and then processing them, I think I will do the coarse purée first (like making a duxelle) and then sauté them. I topped these burgers with a nice slice of Comte cheese, lettuce, tomato, and a bit of grainy mustard. I’m curious for next time how cooked quinoa would stand in for the mashed potatoes, just to add a bit more protein to the dish.

I couldn’t resist the opportunity to try my hand at a homemade veggie burger. The variety of mushrooms made it an appealing recipe to try. The mushrooms produced a fabulous aroma while they were cooking. When it came to forming the patties, the mixture was very sticky. I decided to put it in the refrigerator for a while to firm it up. This worked well.

While these didn’t taste like meat, the patties cooked up nicely and looked like hamburgers. I found the balsamic vinegar added just a touch of sweetness. I served them on some grilled bread with some sautéed vegetables. They made for a lovely meal.

We were having a cookout and my daughter doesn’t eat red meat but adores veggie burgers, so I decided to make these for her. Both my daughter and I really enjoyed these.

There was only one problem. The burgers held together great while frying and baking in the oven, but when we started eating them they fell apart. They were hard to eat and fell out of the bun if we weren’t very careful. They sure were tasty though. I did put the mixture in the fridge to chill before cooking and I think that helped them stay together while cooking. Next time I’ll try adding a beaten egg to the mixture to see if that helps them hold together better.

Despite falling apart, I think these burgers are worth making and eating—just use lots of napkins if necessary and maybe a spoon to scoop up anything that falls off.