This smoky martini takes the classic gin martini and, with a few magic drops of peaty Scotch whiskey, upgrades it to something incredibly special. A dash of vermouth and a lemon twist finishes it beautifully.

The martini has so many tempting variations. Try using a smoky malt whiskey, such as Talisker, or a peated one, such as Laphroaig.–Ben Reed

LC Smoke Gets In Your Eyes Note

Don’t be so certain that you’ll be true to the classic martini. Not after you try this rendition. Sometimes some things just can’t be denied, when smoke gets in your eyes…and your martini. Which reminds us, let’s revisit that other classic, “Smoke Gets in Your Eyes,” shall we? It dates back to 1933, when American composer Jerome Kern and lyricist Otto Harbach got all sentimental in creating the musical Roberta. It became a cult classic, though, reappearing a few years later in the film adaptation of the musical starring Fred Astaire and Ginger Rogers, and was otherwise covered by countless artists since then, including Nat King Cole, that crooner, and those doo-woppers, The Platters. We’ve included the lyrics below, seeing as by now you probably already have the melody in your mind, and we figure you may as well have the proper words, too.

They asked me how I knew
My true love was true
Oh, I of course replied
Something here inside cannot be denied

They said someday you’ll find
All who love are blind
Oh, when your heart’s on fire
You must realize
Smoke gets in your eyes 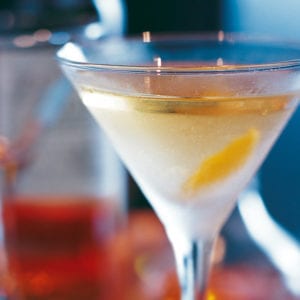 This smoky martini recipe, which is made of gin, vermouth, and whiskey, takes its smokiness from a few drops of whiskey.
Ben Reed
Prep 5 mins
Total 5 mins
Drinks
American
1 servings
134 kcal
5 from 1 vote
Print Recipe 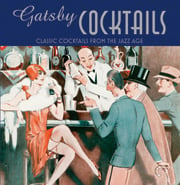 This is such a delicious drink. I’m fond of both martinis and whiskey but I’d never have thought to put them together. Now I know better. I actually used Scotch whiskey for this drink and that touch of Scotch adds a nice smokiness to the gin. The lemon zest balances the whole thing out and yes, you want to run it around the rim of the glass before you pour. I used Bombay Sapphire gin and Lagavulin for the whiskey (Scotch). Another go-to cocktail for the holidays!

I loved this gin and whiskey martini. I used Talisker for the smoky taste. I think this is a winner with the guys for sure and gals, too.

I’m not a fan of gin but I’m a fan of Laphroaig so this was a fun martini. However, I think the gin far outflavors the Laphroaig here. But it does make for a different approach to the traditional drink. If you want a really, really good martini version, use vodka instead of gin and you’ll be very happy with this recipe. And if you’re really brave, try citrus vodka and let’s see if we’ve found the cure for the common cold. Or the flu. We’ll certainly feel better for having tried, no matter which version we drink.

Imagine it’s a clear autumn evening and you and some friends are gathered outdoors around a crackling bonfire. The air is chilly, but the fire is keeping you warm. Sipping a good single-malt Scotch whiskey seems like the right thing to do. But then imagine someone throws a handful of rosemary and a couple of still-green pine boughs on the fire. This variation on a martini is exactly what you want to have in your glass at that moment. Choose a gin with pronounced resinous flavors, and a whiskey with warmth and a hint of smoke. Personally, I’d skip the vermouth. Whiskey is appearing in the role of vermouth in this performance, and the vermouth can’t compete. Don’t be tempted to add more whiskey than called for. The lesson in this drink is how a little dash of whiskey can infuse a cold glass of gin with a spark of fire.