The Cocktails That Came From Prohibition 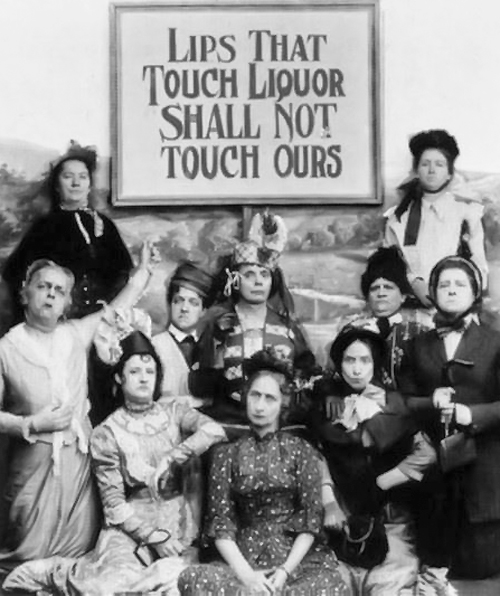 December 5, 1933, was a very, very good day for those who liked to get their drink on. That was the long-awaited moment when common sense trumped the temperance movement and Congress repealed the dreaded 18th Amendment, ending Prohibition after 13 unthinkably long years. While the world of cocktails—and the unfortunate universe of froufrou paper umbrellas—have been an open book since, what transpired before isn’t nearly so well known. Here, from Ted Haigh, the author of  Vintage Spirits and Forgotten Cocktails, is a glimpse at a little U.S. history, the likes of which they don’t teach you in school.—Renee Schettler Rossi

When it comes to cocktails, it’s been a wild ride.

There’s a lot of history embedded beneath our cultural skin for something as apparently frivolous as a simple mixed drink. The newly minted “cocktail” first got noticed stateside back when Thomas Jefferson was president, cited with barely contained contempt in an 1803 New Hampshire newspaper as evidence of the intemperance of modern urban youth. What exactly this “cocktail” was became defined for the world three years later in a New York newspaper—and not in a particularly positive way there, either. The citation suggested that Democrats who drank it would, under its effects, vote for anyone.

But the real shocker is that cocktails were morning drinks. Drinking in the morning often means getting over what you were drinking last night, and that kind of behavior is what they used to call dissipated. If that wasn’t sufficiently nefarious, cocktails contained something called bitters. “Bitters” may sound benign to modern ears, but at the dawn of the 19th century, they were medicine. Adding them to cocktails was the equivalent of dousing one’s beer with Nyquil. (No one knows for sure how the “cocktail” got its name, but I’m certain it was because it was your wake-up call—like a rooster heralding the early morning light. And its plumage? Those spicy bitters.)

Cocktails were the realm of sporting men—gamblers, hustlers, and protégés of loose women. If you drank a cocktail, you were a little dangerous, and therein lay the seeds of its fame. It was the bad-boy syndrome. Women drinking cocktails? Edgier still.

While still roundly eschewed by polite society, the cocktail steadily became more popular. Gamblers frequented horse tracks, as did highfalutin horse owners, their hoity-toity offspring, and sycophants. To the latter, the sour reaction to the cocktail added a dangerous element that they found very attractive. The economic stature of this group tamed the cocktail form by making it fashionable in our class-conscious society. By the 1830s, the cocktail was passed from sporting men to sportsmen at racetracks and boxing rings. With that it began to appear at foxhunts, polo matches, and other more moneyed forms of morning entertainment.

What happened between those early 19th-century newspaper columns and the later part of the century was the integration of the cocktail, through familiarity, into more general acceptance. By this time, it had ceased to be typecast as a morning drink and was consumed at less controversial hours, and those upstanding, curative bitters were now under attack as snake oil and sham medicine. Still, there were no standards of measurement or ingredients, and no preeminent cocktails—yet.

A flashy bartender named Jerry Thomas changed all that when, in 1862, he authored the first bartender’s guide. Suddenly you stood the chance of getting the same whiskey cocktail at one bar as you might across town—or across the country. A slew of bar books followed.

Nowadays we think of practically any beverage made with hard liquor as a cocktail. In those early days, though, that would have been equivalent to proclaiming that all breeds of dog were the same. Each of these drink “breeds” was made in a slightly different glass or contained slightly different ingredients. A cocktail was a lot of your booze of choice, a little sugar, bitters, and maybe a dash of liqueur, stirred or shaken with ice and strained into a stemmed glass with, perhaps, a fruit-peel garnish. A mint julep wasn’t a cocktail; it was a julep. A sloe gin fizz wasn’t a cocktail; it was a fizz. There were also crustas, fixes, sangarees, negus, scaffas, smashes, cobblers, flips, punches, swizzles, possets, slings, syllabubs, and oh, yes, cocktails. A julep had crushed or shaved ice. A flip had egg in it. A crusta had a sugared rim. Punch had fruit juice.

Anyways, as the country and world moved inexorably toward city life and industrialization, alcohol represented a new battleground between factions of people struggling to understand indigence, homelessness, begging, theft, and what they saw as general moral backsliding. The temperance movement bore the mantle of religion, but it was as much sociological. It was simple human nature that people wanted the satisfaction of casting blame on some single person, event, or thing. For the temperance gang, that was alcohol—sometimes beer, often wine, and always hard liquor.

Prohibition, during which it was illegal to make or buy alcohol for other than medicinal reasons, was enacted in 1919 and went into effect in January of 1920. Contrary to the wisdom of the time, Prohibition was not an obstacle to the increasing ubiquity of the cocktail—it was the reason for it. Nothing is so desired as the thing denied. And Prohibition made people want cocktails very, very badly.

Because synthetic liquor was the easiest to make—quick to distill, flavor, and bottle—it was also the easiest to get. Problematically, it tasted awful. Cocktails, with their mélange of flavors, were a made-to-order method for disguising bad hooch. People forgot the earlier, now seemingly frivolous distinction between types. All things became cocktails. They tasted good and got the job done.

Some wonderful cocktails were coined during those 13 years. If you wanted a good drink and had money—and in the 1920s, people did—you booked steamer passage. Virtually all the ocean liners had European registries, and you could start drinking as soon as you were in international waters. You might start celebrating that fact by consuming a three-mile limit, a drink that commemorated the end of U.S. territorial waters and the beginning of boozing. When the government promptly changed the range of interdiction to 12 miles, a twelve-mile limit cocktail was created, of course.

The legal cocktail returned in 1933. Finally one could again order a lawful drink, after 13 long years. With the stock market crash in 1929 and Prohibition’s repeal, the cocktail’s appeal was unequivocal. It was escape. And it represented a better world to come.

Back to The Cocktails That Came From Prohibition on Leite's Culinaria