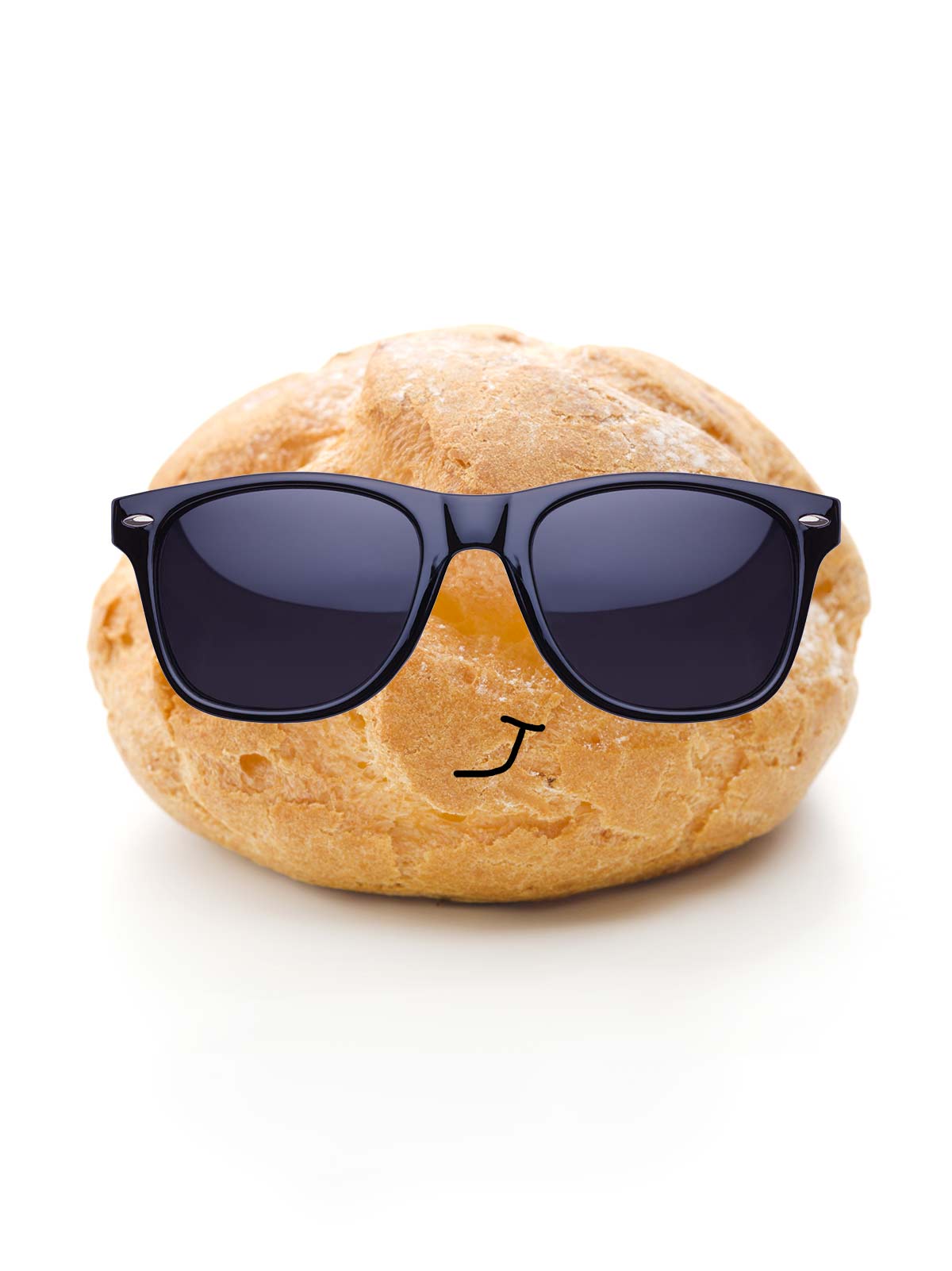 I knew I was different when I was seven years old. While all the other kids in the neighborhood were playing in the Jennings’ backyard, sniggering at stolen copies of Playboy and knocking back enough Pez, Twizzlers, and s’mores to make our dentist start shopping for a new ’67 Acapulco blue Mustang, I was hiding out in our kitchen.

“Don’t hang from the oven handle,” Mamma Leite would yell, thwacking me on the back of the head with her constant companion, a wet dish rag. “And don’t open the door until they’re done.”

Inside were four Pepperidge Farm apple turnovers. One for her, one for my dad, and two for me. It was the occasional dessert she deigned to serve when I would purposely convulse at the grocery or pronounce in front of company that I was adopted and that my real family lived in a mansion by the sea.

I stood vigil, forehead pressed against the splattered oven window because I desperately wanted to watch the puffery in action. Too many times I’d grown impatient or distracted and stepped away from four flat, pallid triangles only to return to a quartet of buxom beauties, just a hint of their lovely juices seeping through the frills of their ruffles. But that afternoon, I was determined to study every tiny transition in this alchemy. I watched how the sealed edges were the first to blossom and split into a million layers. As the turnovers began to brown, I watched, spellbound, while they bubbled and heaved as though they were coming alive, becoming bigger and firmer until they’d risen, fully engorged! What can I say? While the Freeborns and Jennings ogled what Lynn Winchell, Miss December 1967, had to offer, I was becoming addicted to a very different kind of porn—one that  conveniently required no confession with Father Fraga at St. John of God on Saturday afternoons.

Looking back, my life has been punctuated by puffs. Turnovers, vol-au-vent, profiteroles, éclairs. By the time I was 25, I was a waiter at the Hors d’Oeuvrerie at Windows on the World, and had fallen in love with all kinds of international desserts. But the puffers remained my favorite. I’d given up my childish ways—and Pepperidge Farm—in favor of the more adult pleasures of the queen of all pastry doughs, pâte á choux.

I wasn’t alone in this fixation. Every so often the seemingly misanthropic Alan Lewis, the general manager of Windows, would come in for lunch. He was the right-hand man to the explosively temperamental Joseph Baum, one of the famed restaurateurs responsible for the Four Seasons, the Rainbow Room, and Windows. Lewis would sit by himself and read his paper, every so often lifting his head, watching, and waiting to spot something out of place. Although only in his mid-60s, he reminded me of Winston Churchill’s bulldog in its later years. All the waiters hated to wait on him.

The first time I took his order, I climbed the stairs terrified—not unlike how Dorothy & Co. approached the Great and Powerful Oz. He mumbled his order into his newspaper, never looking up, which suited me just fine. A few minutes later, I slid a plate in front of him and he paused.

Shit, I thought. I did something wrong. Demerits or a tongue lashing or extra breakfast shifts were sure to be mine.

“You’re new.” How could he have possible gleaned that from my hand putting down a plate in front of him?

Then he returned his formidable gaze to his newspaper.

After that, he asked for me by name. (To this day I have no idea why. I know for a fact that he preferred his eye candy to be of the feminine persuasion.)

“So what do you do besides this?” he asked me one day, sweeping his hand across the room. Knowing he was famous for trick questions, tripping up unsuspecting staff by revealing their less-than-fanatical devotion to the industry and idolization of the kitchen, I smartly sidelined acting and blurted out “baking” out of a primitive sense of self-preservation. He seemed to like that.

“What do you bake?” he asked as he looked up with an arched eyebrow that clearly telegraphed, Don’t disappoint me.

“Um, well,” I stalled, mentally flipping through the sticky pages of my only cookbook at the time—a bargain tome with recipes from around the world that weighed as much as a VW Bug. “Éclairs and gougères. Oh, and Paris’s Breast,” I added with just a hint of smugness. I knew the plump, cream-filled pastry ring, which symbolized the five-lane avenue that circled the city’s great big nipple of the Arc de Triomphe, would impress him. Even if I’d never seen one before in my life.

“A paree bress?” he said, both correcting me and expressing considerable doubt. “Bring me something.”

Because Lewis’s descent on the Hors d’Oeuvrerie was capricious, to say the least, the chances of his arrival overlapping my work schedule were slim. Still, I carted a homemade chocolate éclair in a brown paper sack on the subway from South Oxford Street in Fort Greene, Brooklyn, to the 107th floor of the north tower almost every day for more than a month, as cautiously as if I were transporting the Shroud of Turin. That meant every morning I had to bake said éclair, make said pastry cream, plop the cream into a plastic zip-top bag (lest the filled pastry lose its crispness), and be prepared at a moment’s notice to procure said glorious éclair. But as much as I groused to my roommate, Darrin, and much as I loathed lugging bags of groceries to our kitchen that was once a 19th-century walk-in closet, I secretly loved it. I loved boiling water and butter, dumping in flour, mixing until my arm ached, cracking in eggs, stirring until the batter shone, and scooping perfect little domes with my ice cream scoop.

When Lewis’s and my orbits finally realigned—by which point I’d gotten extremely adept at baking pâte á choux—I presented him with my éclair (with just a whiff of self-importance).

“Here’s one of the pastries I was telling you about,” I said, sliding the plate in front of him. He looked confused. “You know, the one, the pastry I told you I make.”

He took a bite and grunted.

That was it. A grunt. A single frigging grunt. After all that frigging work. Crestfallen, and, frankly, not a little pissed off that this man had me dancing on a tight wire for more than a month, I wheeled around and walked away. When I returned to clear his table, though, I noticed the éclair was gone. High praise, if you ask me. You could feed a small country with what he usually left on his plate.

Not long after, I quit and headed for the loftiest of culinary heights, albeit all the way down on the first floor of the Drake Hotel, at Jean-Georges Vongerichten’s first U.S. venture, Restaurant Lafayette. I was one of his two first front waiters. There it seemed everything was puffed—the tender vol-au-vent, the majestic oeuf au caviar, the damask draperies, to say nothing of the egos of most of the customers. But it was the gougères that most delighted me.

Until Jean-Georges V., my exposure to the world of puffsters was, almost without exception, sweet. I adored all manner of creams—pastry, whipped, and flavored—nestled within a crunchy pastry bite. But at Restaurant Lafayette, savory gougères flew out of the kitchen faster than ping pong balls at a Forrest Gump match.

What I adored about these orbs of godliness was how light and airy they were and how the cheese—usually Gruyère—infused the puff with its nutty umami flavor. All I wanted to do was stuff them in my mouth chipmunk-style and eat, and eat, and eat. I had found my puff of preference.

Shortly before we opened to the public, Jean-Georges V sat all the waitstaff at a long table in the dining room for a private tasting session.

“Zis is the only time I want to zee you eating my food in za dining room unless you are a paying guest,” he said in his devastatingly charming Alsatian accent. “You take one bite of food while working, and you are—” and with that he drew his index finger across his entirely too thin neck.

It was my one chance to eat as much as I wanted and I wasn’t about to squander it. As he described each dish in the precise way he wanted us to present it to guests, I polished off a silver bowl of gougères by myself. One of the French waiters who’d been imported from Paris to make our very American waitstaff appear more international shot me a look so dripping with derision it practically slid down the slope of his sizeable nose and arced across the table.

“Quoi?” I said sotto voce, daring him to test what he considered to be our American thuggish ways. He deflated back into the chair, a peacock without plumage.

The restaurant opened a few days later—without any international skirmishes—to four stars from Bryan Miller, the then-restaurant critic for The New York Times. Near the bottom of his effusive review, he wrote, “The crepuscular lighting sometimes makes it difficult to read the menu. When a waiter saw us straining, he came by and gave us tiny flashlights, the kind children twirl at the circus.” (That waiter was me!) Sadly, I couldn’t afford the $75 tasting menu, $160 in today’s coinage, so I never enjoyed the restaurant—or its marvelous gougères—as a guest.

Not long after, I trashed my bargain basement cookbook and splurged on a copy of  Larousse Gastronomique. While searching for a gougères recipe to commit to memory, I stumbled upon the entry for Paris’s Breast—its great mammary commemoration to itself. Due to what I’m convinced is an undiagnosed case of dyslexia, I was shocked to discover that the circular pastry had been created to honor the Paris-Brest-Paris bicycle race—its shape suggesting a wheel. Not a breast or nipple in sight. It made more sense, sure, but I liked the idea that it was kind of an edible Janet Jackson wardrobe malfunction. What can I say? Once a pornographer, always a pornographer.