These fried eggs with crisp bread crumbs are a comforting one-skillet meal, perfect for any time of the day. See the variations below the recipe for a little bit of veggie inspiration.

As simple as it sounds, coordinating eggs with sides—even for a short-order cook like me—can be a challenge. I love this fried eggs with crisp bread crumbs recipe because it’s an all-in-one-skillet supper.–Bill Granger

LC Got Eggs? Then You’ve Got Supper Note

Got eggs and bread and a skillet? Then you’ve got supper. Take this recipe, if you can even call it that. It melds crisp and crunchy with soft and gooey—and it does so to terrific, thrifty, even lusty effect. It’s a handy little supper that chefs turn to surprisingly frequently at all hours of the day and night and can easily be adapted to all manner of crazy cravings and desperate pantry situations. 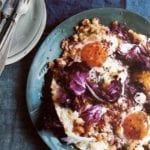 This simple recipe for crispy bread crumb fried eggs adds some tasty crunch to your breakfast. It’s like having your toast right in with your eggs. Add a handful of radicchio for a little extra goodness.
Prep 10 mins
Total 10 mins
Breakfast
American
4 servings
332 kcal
5 / 2 votes
Print Recipe 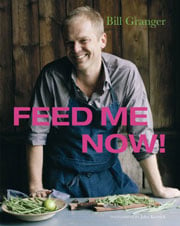 This recipe makes a meal or side for the flexitarians. I just love eggs, so I’m always looking for new ways to prepare them. I did have some trouble with the yolks breaking, so I’ll be careful next time to gently nest them between pieces of bread and not on top. I’d also use less radicchio or switch out the type of greens I use—frisée and arugula, anybody?

I like this combination of eggs, radicchio, and bread crumbs—well, croutons, to be more accurate. Actually, I’d call it a fried egg salad. The radicchio adds great color while the eggs softened the croutons and fused them together to enhance the overall texture. Although nice the way it is, the radicchio may benefit from being warmed up, too. Or even seared a bit in some olive oil and kept warm while you’re preparing the eggs and bread. I found that the final result could still use a judicious measure of salt, tempered by each person’s appetite. I had sumac and Aleppo pepper, so I used a small pinch of each in the warming vinegar. My 9-inch skillet was large enough for half a recipe, but you could probably use a 12-inch pan for the whole shebang.

My torn bread pieces were about 1/2-inch in size, which worked quite well. 4 slices of ciabatta came to about 3 to 3 1/2 cups.

The radicchio heads were about 6 ounces each. 1 half, once torn, seemed to pile up rather quickly. I think that in the future, I would use 1 medium-large radicchio and quarter it, using 1 cored quarter per serving.

A pinch of sea salt—I used Chardonnay smoked salt—over the finished plate at the table seemed to bring out the best in this dish.

This is just a good idea, plain and simple. It took all of 10 minutes to throw together but made for a delicious and satisfying meal. The combination of slightly wilted and bitter radicchio, warm and crunchy croutons, rich and runny yolk, and the warm tangy bite of vinegar is wonderful. Also, it’s pretty close to a pantry dish—something you can always throw together in a pinch. I don’t usually have radicchio lying around but almost always have arugula and think that would make a fine substitute. I ended up tossing the radicchio with the warmed dressing in the pan just to wilt it a bit and throwing that on top of the croutons and egg. Also, I used white balsamic instead of red wine vinegar. At the end, I sprinkled everything with za’atar spice blend and black pepper.

I’m a big fan of quick and easy dinners, and this one fit the bill—runny eggs, crunchy bread, and warmed radicchio made for a very tasty meal. I would even consider this for a brunch with friends. A few notes: I tried half with raw radicchio and half with wilted. I preferred the wilted radicchio. I used red wine vinegar, but I think it would have been much better with balsamic. Finally, I did use the red pepper flakes, but they really didn’t add anything. Next time, I would skip the crushed red pepper.

I love that this is an all-in-one dish that’s quick to make. It’s good for any meal of the day, too, though we had it for dinner. The bread gets toasty and is a nice foil to the creamy yolks. The only issue I had was getting the tops of the eggs to fully cook, but a quick spin in a hot oven fixed that. I used Aleppo pepper as a final seasoning.

I loved this. It seems so simple (and it is), but the combination is great. It’s another take on the frisée-with-poached-egg type of salad. A few cubes of crisp bacon would take it over the top.