The skillet cheeseburger, from Seattle’s Skillet Street Diner, is made with a grilled beef patty, cambozola cheese, peppery arugula, and bacon jam.

This burger has made us who we are, in a sense–it’s a great marriage of complementary flavors, with the saltiness of blue cheese, the bitterness of arugula, the sweetness of Bacon Jam, and the solid foundation of the bun. It’s consistently been the most ordered item on the menu at Skillet, both at the food truck and the diner. It’s also been featured on magazine covers and TV. It’s basically our opus.–Josh Henderson

What you need to know about this recipe…

There’s no scarcity of curiosity-arousing ingredients and techniques in this simple burger recipe. Easily the most ostentatious is the Bacon Jam. (Yes, Bacon Jam. One taste and you’ll understand.) A close second is the cambozola, a Brie-style cow’s milk cheese with the merest hint of blue veining. (Think if a triple cream cheese and an Italian Gorganzola had a love child. Try it. You’ll like it.) And a distant third? Toasting the buns before you grill the burgers. (Call us crazy, but we’re accustomed to toasting the buns at the last minute, while the burgers are resting. Now that we think about it, though, if the buns have a chance to cool prior to being burdened with the weight of a burger, the bottom bun may be less prone to turning soggy.) 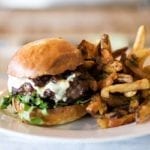 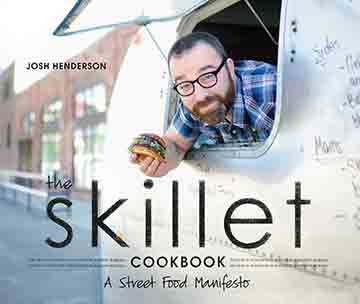 I love EVERYTHING about these burgers, although I must admit that the actual burgers are nothing more than a vehicle to convey the BRILLIANT Bacon Jam and the WONDERFUL Cambozola cheese, which Wikipedia says is a combination of French ripened triple cream cheese and Italian Gorganzola. I used the Beautiful Burger Buns recipe from this site and I must say this is the finest burger that I’ve ever made.

Salty, sweet, peppery, smoky—this burger is a nice package of great flavors that work wonderfully together. (If you love Cuban sandwiches and muffaletta, you know what I’m talking about.) Beef and blue-y cheese is a known combination, but when you add a wad of arugula and some Bacon Jam (DO make it), WOW!

I made one substitution: I used challah buns, which seemed to have replaced all the brioche buns in town the week of Rosh Hashanah. Although not as buttery as brioche, challah worked well as it’s also sturdy and eggy, like brioche.

We enjoyed this burger very much. I used cambozola cheese and fresh arugula from my garden. The Bacon Jam was a big hit, and we really loved the flavor combination of the garnishes.

We grilled our burgers for a total of 6 minutes, as the recipe indicated, and they came a perfect medium-rare. Even my cousin’s 5-year-old son liked this burger, although he requested Swiss instead of blue cheese, which worked just as well.

Two words: Bacon Jam. Oh my goodness gracious, is this stuff good. A pound-and-a-half of bacon (about 15 slices) may seem like a lot, but don’t fret. The jam lasts up to 4 weeks, which is about 3 weeks longer than you’ll need. Combine the jam with arugula and creamy cheese, and you have a mighty fine burger.

For those who prefer a burger a bit more on the medium-side, leave the burger on the grill longer than 3 minutes or raise the grill temperature to medium-high.

OMG, this burger is a great combination of flavors! Meaty, salty, creamy, not to mention the slightly sweet Bacon Jam.

The Bacon Jam makes everything taste great, including this burger. I’ve used the jam in a grilled cheese sandwich, on crackers, on toast. It would be perfect for an appetizer on toasted baguette slices or roasted potato slices with the blue cheese and arugula. I’d recommend serving it at room temperature rather than right out of the fridge.