Skip to content
Home » Writings » Essays » Table For One 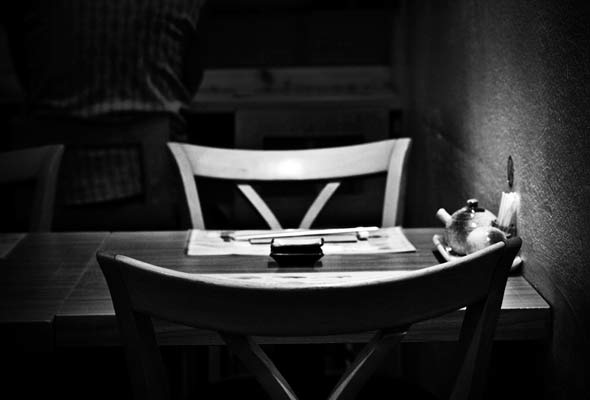 It was hot in Manila that spring, and frankly, I was lonely. Then I made friends with Dr. Xuan.

We met at the pool of the Tropicana, the gritty apartment-hotel where I was staying while on a six-month teaching fellowship in the Philippines. It was my first time in Asia, and I was finding the experience hard going. In the evenings, to cheer myself, I liked to take a quick dip before dining alone in my room. One night when I came up for air, there was a man beside me. I’d noticed him at the pool before. He was clearly Asian but didn’t look Filipino.

“Where are you from?” he asked in lightly accented English. When I told him, he seemed surprised. He’d never met an American before.

Not Hong Kong or Taiwan but the People’s Republic. Now I was surprised. It was 1996, well before citizens of mainland China started traveling abroad en masse. The doctor assured me that his country was opening up. He explained that he was in Manila for a few weeks as part of a medical delegation. He taught me how to pronounce his name—”Doctor Shwan”— and told me he’d be coming back to the pool. Great, I’d thought, wondering what he’d say about his closed society.

The next few times I went for a swim after work, the doctor was already there. We chatted between laps. Dr. Xuan was as eager to hear about my life in the West as I was to learn more about his. Also, after weeks of solitude, it was great to have a friend—not just any friend, but a bright man who seemed to have no designs on me beyond the natural curiosity that comes with meeting a new person. This suited me fine, as I wasn’t looking for a lover, just someone with whom to share an occasional conversation. Our friendship retained a certain formality—Dr. Xuan never told me his first name, for example, and I never asked—but it seemed to me that we were, in a small way, bridging the cultural gap.

One day while chatting at the pool, we discovered that we shared an interest in food. Cooking had proven challenging for me in Manila—I had a hard time finding familiar ingredients and, though I loved to cook, often simply ordered take-out from the Thai restaurant downstairs.

Shopping wasn’t a problem for him, Dr. Xuan told me.

“I brought my spices with me from China,” he said. “Maybe I could cook for you sometime.”

I immediately accepted, delighted by this development. Dr. Xuan told me not to bother about shopping. He would bring everything to my place. I couldn’t wait to see what kind of fabulous Chinese dishes he’d whip up in my kitchen.

On the appointed evening, I set the table for two and was ready when the bell rang at 6 p.m. But when I went to the door, Dr. Xuan was not alone. He’d brought a friend, and they were bearing large trays of steaming food—the dinner was already made! As they set the dishes on the table, I tried to hide my disappointment. I’d so looked forward to cooking with Dr. Xuan. Thankfully, the friend excused himself. At least, I thought, we could share the meal in private and continue getting to know each other.

Dr. Xuan was beaming as he lifted metal covers from the dishes he’d brought. Strange and delectable aromas filled the room. There was spicy fried eggplant and fish with herbs and shredded chicken with scallions topped by magenta powder. There were eggs and marinated beef and dumplings and stir-fried noodles and fried rice, again topped with purple dust. A feast!

I pulled a couple of San Miguel beers from the fridge and went to the table.

I couldn’t believe my ears. When the doctor had said he’d cook for me, I’d naturally assumed he’d eat with me.

“I will come back later for the dishes,” said Dr. Xuan. He smiled, bowed, and left.

There was nothing to be done about this unfortunate turn of events, so I sat down and ate. Everything was spicy, unusual, and delicious—unlike any Chinese food I’d had in the past.

Dining alone that night, I had plenty of time to ponder the way appearances could be deceiving. Dr. Xuan and I were friends, yes. But what did that mean in his culture? Perhaps he saw his departure as tactful—or maybe there was something else. Since meeting the doctor, I had assumed he had a minder—someone official to keep an eye on his activities—and now I told myself this must be why he hadn’t stayed. Slight consolation.

When Dr. Xuan returned for the dishes, he asked how I’d liked the food.

“It was incredible, like nothing I’ve tasted before,” I said, thanking him profusely. He beamed with pleasure, bowed, and departed.

Feeling depressed by the unexpected way the evening had gone, I crawled into bed early and was sleeping soundly when the bell rang again at 2 a.m. I threw on a robe and went to the door.

“Who is it?” I called, more than a little annoyed by this nocturnal intrusion.

“What is it?” I asked as I opened the door. “Is anything wrong?”

“Not at all,” he replied, smiling shyly as he entered my flat. “Are you ready?”

He pushed the door shut and moved toward me.

“Ready for what?” I asked nervously, backing away.

“The spices…” he said, reaching out as though to embrace me. I jumped back.

“They’re special spices! I know you’re ready for me now.”

Suddenly I understood. The purple powder. He’d sprinkled my food with spices that he took to be aphrodisiacs. Well, obviously they hadn’t worked on me.

“No, please,” I said, ushering the doctor toward the door.

Dr. Xuan was reluctant to leave, and I didn’t want him to lose face. That would have ended our friendship. How to tell this kind, intelligent man that the real aphrodisiac would have been the pleasure of his company over dinner?

“I loved the food, but I’m very tired right now,” I said, showing him out. “Let’s talk about it tomorrow. See you at the pool?”

I went back to bed ruminating about courtship rituals and how difficult love is, and not just among people from different cultures. I couldn’t blame the entire incident on Dr. Xuan, for this wasn’t the first time a man had misread my signals. Had I been unconsciously flirting with him, leading him on with talk he took to be spicier than I’d intended?

As I drifted toward sleep, I decided I wanted to give Dr. Xuan a second chance. Maybe he would cook for me again—and this time stick around to share the meal. If he could escape his minder and spend the evening alone with me, who knows what could happen? I might even change my mind.

Yes, I thought. If Chinese spices be the food of love, play on.

Meg Bortin is the creator of The Everyday French Chef, "the modern cook’s guide to producing fabulous French cuisine without spending hours in the kitchen." Bortin is working on a collection of stories about her unlikely path to becoming an everyday French chef via her unconventional journey as a globe-trotting journalist on the trail of great food.