This patatas bravas, made from potatoes spiced with chile and paprika as well as eggs and Parma ham, is perfect any time of day. Doesn’t a runny egg make everything better?

Honestly, is there anything better than spiced potatoes, crisp ham, and a fried egg, cooked together and topped with lots of black pepper? This is comfort food at its best and makes for a perfect lunch on a winter’s day.–Katie Quinn Davies

Take a gander at the mention of spuds in the ingredient list. By way of explanation, “waxy” means fingerlings, new potatoes, Yukon Golds, or practically any potato other than a russet. Nothing against russets, mind you. This recipe simply needs a spud that won’t exude its essence all over the place.

Patatas Bravas with Ham and Egg 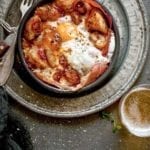 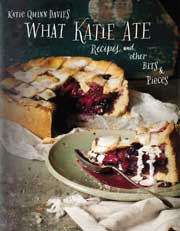 Potatoes, chile oil, smoked paprika, fresh thyme, Parma ham, and eggs = delightful lunch. My choice of potato was baby Yukon Golds that I simply sliced in half. The chile oil had the requisite kick from the cayenne chiles and the lingering smokiness from the paprika. We really enjoyed the fresh herbal essence of the fresh thyme. I used a good teaspoon of sea salt in the oil but also sprinkled fleur de sel over everything at the end for that salty crunch from the jagged nuggets that are bursting with flavor. Frying the potatoes until golden took 6 minutes on the first side and about 4 on the second. I simply lightly poached the eggs instead. Our eggs are fresh and free-range with yolks as brilliant orange as a sunset, so not only did the dish taste great, it also looked appealing. We attacked with vigor. Comfort food, this. The meal is essentially love in a bowl! Another keeper.

Delicious for breakfast, lunch, or dinner! As individual servings the dish also keeps well to reheat for another meal—always a plus. I used 10-ounce Pyrex bowls to assemble the ingredients in. I cooked the final product in a larger Pyrex dish in a water bath at 450° for 15 minutes, then let it stand for 2 minutes; this should give you a nice and runny but not too underdone yolk.

This recipe is a little daunting at first, but well worth it. The end results are a wonderful combination and would make an excellent meal no matter when you served it—breakfast, lunch, or dinner. The taste of the crisp Parma ham is wonderful all by itself. I served mine garnished with a little sharp Cheddar cheese and thinly sliced green onion. I only used 4 Yukon Gold potatoes, as they weighed in at 2 pounds total. I also mitigated the heat from the chiles by only using 1 cayenne pepper (it was just starting to turn red) with the seeds and ribs removed and about an equal amount of red bell pepper. I used a half pound of Parma ham—10 slices in total, as there was a bit of an accident when broiling and I had 4 flaming pieces of Parma ham that were pretty much cremated. (When you’re broiling the ham and think it needs another 30 seconds to be just right, take it out then, don’t wait those extra seconds or it’ll be too late.) I used ovenproof glass casserole dishes in a bain-marie for baking the assembled servings, which were done in about 10 minutes. The egg yolks had a tough skin on top. I’m wondering if either covering them with some foil while baking them or even poaching the eggs separately and placing them on top mightn’t work better.

I made a single serving of this for a lunch on my own. The finished dish is delicious, homey comfort food. I found the recipe worked quite well, but the amount of potatoes was a bit more than I thought necessary for a single serving. (I used 1 medium-large and 1 quite small potato.) I’ll give a ballpark cooking time of 15 minutes at 350°F. Of course it all depends upon how cooked versus runny the eaters like their eggs.