We never would’ve thunk that made-from-scratch rava dosas would be doable for dinner on a weeknight. Guess who was wrong. To ensure things go as slickly for you as they did for us, read through this rava dosas with potato and chickpea masala recipe first, gather all your ingredients and then get to work peeling potatoes as you’re keeping an eye on the coconut and cumin being toasted in the skillet. Next, make the masala, and then bring it to a simmer while you chop your onion. Toss the potatoes in with the spices and, while the masala cooks, set about making your dosa batter. Somewhere along the way, uncork a bottle of white wine and have a sip, seeing as you’ll definitely have the time to spare.–Renee Schettler 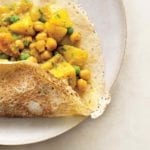 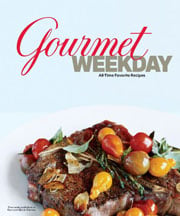 For the masala filling

For the rava dosas

Although the potato chickpea filling isn’t traditional (normally it’s only potato), it was quite flavorful. I used homemade Madras-style curry powder in this recipe. The dosas (crepes) turned out well. I always use a cast-iron skillet for my dosas and I used ghee instead of oil to cook them. However, I did find that the filling is done in a very complex manner. For a beginner it might be overwhelming.

Recipe © 2012 The Editors of Gourmet. Photo © 2012 Mikkel Vang. All rights reserved. All materials used with permission.