Fiddlehead and burrata salad is a simple, exquisite spring recipe made with a simple vinaigrette and seasonal spring fare as well as creamy burrata cheese. Sorta makes us wanna mumble “fiddledeedee” in our best Southern accent.

Fiddlehead ferns. Sorta sounds like it could be the punch line to a loony knock, knock joke, don’t you think? “Knock, knock.” “Who’s there?” “Fiddlehead fern….” Anyways, in case you’ve not a clue as to who this fiddlehead character is, it’s a funny-looking furled curlicue of a fern frond with a sorta green taste and a surprisingly impressive array of nutrients, including minerals, antioxidants, and essential fatty acids. The only trick is actually nabbing fiddleheads, which are a harbinger of spring and typically available only for a very short time at farmers’ markets and grocery stores that carry local seasonal fare. Well, that’s not the only trick. The other one is saying its name without cracking up. Or confusing it and saying fiddledeedee by mistake. If fiddleheads are unavailable, swap fava beans or asparagus.–Renee Schettler Rossi 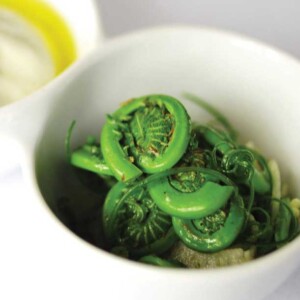 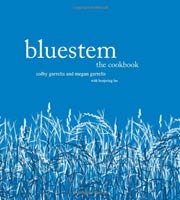 For the sherry vinaigrette

For the fiddlehead and burrata salad

Make the fiddlehead and burrata salad

Unable to find any of the title ingredients, we still tried this using asparagus, fresh mozzarella, and balsamic vinegar. The combination of flavors was one of those experiences where you just have to keep taking another bite to taste the soft, creamy cheese topped, the olive oil, the balsamic, all mingled with the taste of the asparagus—a wonderful contrast of flavors and textures that I have to make again. We decided this would also make a great appetizer spread on flatbread. I hope to find fiddleheads and especially burrata to try this recipe again. A simple but very impressive recipe.

This exceptional recipe is one that really calls out for early summer entertaining. I had no problems finding anything except the arrope. Fortunately, I feel that vincotto is virtually the same, and it’s much more available and works beautifully with the olive oil and burrata. The fiddleheads, with their earthiness, went quite well with the sweetish shaved fennel and the sherry vinaigrette. So you get sweet and savory nuances to complement the burrata plus a variety of textures and flavors in the greens that make this a great light lunch. I’d recommend serving this with small squares of multigrain bread to soak up the flavors on the plate. Also, if you’re thinking of using aged balsamic vinegar, I’d recommend reducing it by half to thicken it somewhat before drizzling it over the cheese.

Sherry vinegar is one of my favorites. And I love that the olive oil is heated with the shallots and then cooled, infusing the oil with flavor. This little step that takes 2 extra minutes adds that little something that puts the vinaigrette over the top. I’ve done this with other vinaigrettes, but not with sherry vinegar—until now. Now that I have, it’s my new favorite sherry vinaigrette recipe. I kept tasting it, then tasted it some more, and then a little more to make sure it was as yummy as I thought. I used it on a simple mesclun salad and also drizzled it over roast lamb. Alas, then it was gone. However, I would love to try it on roasted nectarines or plums. It would be delicious drizzled onto roasted butternut squash soup along with some creme fraiche and pepitas, or a tiny bit over spring pea soup. Or, for someone who loves it as I do, as an appertif. 🙂 Too bad sherry vinegar doesn’t come in gallon containers….