How to Eat a Porcupine 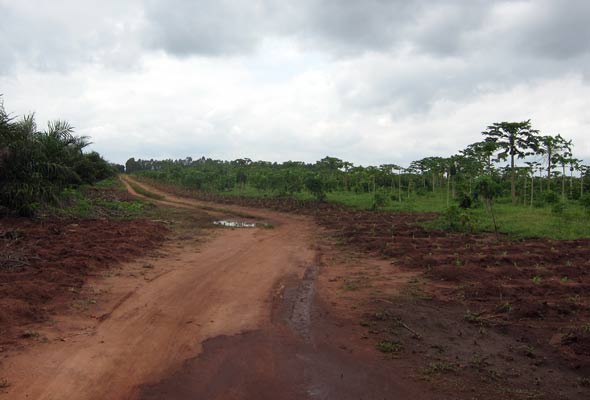 I was sitting in the backseat of a sleek black Lincoln Town Car, squished alongside three other expats as we barreled down the barren two-lane road between Ibadan and Lagos. Staring out the window at the hot, dusty, hostile Nigerian landscape, I was thinking about how just weeks earlier, I’d been lunching on oysters and chilled white wine in a bustling Parisian brasserie, being wooed by soft words and luxury. Now, this. I scrutinized the parched scrub, which was deathly still in the intense African heat. This was anything but romantic.

A year before, after living on my own in New York City for years, my life and career going exactly nowhere, I’d done what I always do: dropped everything and run away. To the cobbled streets of Paris I’d gone—actually, to a friend’s studio apartment in the 5th I’d gone, armed with a few semesters of high school French, two battered suitcases, and my life savings in traveler’s checks. I was confident that in France, rather, in the fantasy France of my imagination, I’d find love and the life I was intended to lead.

I’ve never been one to think things through. I tend to be impulsive, constantly in motion, abandoning one unfulfilling situation after another, latching onto any opportunity that places itself in front of me and thinking—hoping—that the next prospect, the next choice, will be the one that solves all my problems. Months after moving to Paris, I’d still been feeling unsettled, yet I had finally found romance, if not quite love. Swept off my feet by a tall, dark, handsome foreign correspondent based in Nigeria, I’d one day found myself boarding a plane at Orly to be with him. Without thinking, my 26-year-old self had traded broad Parisian sidewalks, warm croissants, and steak frites for armed guards, quinine tablets, and nights at a chic Japanese joint whose sushi, it turned out, was from fish caught in the bay south of the city—the same bay in which we’d seen a dead body floating.

The love that had brought me to Nigeria had quickly fizzled, though my sense of adventure was still going strong. Road trips were an integral part of daily life, a way to get out from behind the enclosed walls and gates of the expats’ overprotected fortress. These outings often found us whizzing by small groups of two or three locals along the edge of the highway who would be holding unidentifiable animals by the tail with one hand and clutching a machete or club in the other, selling their wares in the scorching sun. “Bushmeat,” my friends had explained. A local curiosity, yes, although these roadside markets charmed me not.

This day, however, my friend and former romantic interest, Chris, suddenly signaled the driver to pull over. I watched nervously as the car came to a stop in front of a man and a woman, empty-handed except for their crude weapons, standing before a bare, bloodstained, ramshackle table, waiting for clients and a new order. One wave of Chris’s hand signifying his interest in the purchase of fresh meat and the two dove deep into the bush, where they were quickly swallowed up by the dry brush.

The rest of us squinted out the window into the sharp glare of the sun from the sweltering backseat, attempting to follow the couple’s movements through the branches. Once they disappeared from view, I silently glanced at my friends to gauge their reactions. One of the group, a university professor who’d seen pretty much everything in his two years here in Nigeria except for this, questioned the wisdom of eating bushmeat with a nervous chuckle and an attempt at a joke. The two others—a fearless British NGO worker and a quiet young American missionary—said nothing, caught somewhere between intrigue and dread. Even Chris was having a hard time hiding his doubts behind his usual bravado.

My eyes turned back to the bush, my mind to the activity hidden deep within the brush. We waited. The air conditioning faded and then clicked off, and the heat in the car intensified. I felt rivulets of sweat trickling slowly down my back as I shifted uncomfortably against the vinyl seat.

After what seemed like hours, the couple reemerged, the man proudly holding a small, fat animal by one of its hind legs. After a quick back-and-forth negotiation in the local language between the couple and our driver, the sale was complete. On that rickety table, fast work was made of the animal with knives of questionable sterility. And then we left with our newspaper-wrapped parcel of skinned meat.

The drive back to our house in Lagos was wrought with silence, broken only by an occasional rumble of nervous laughter. This had been the autumn of my first martini, my first joint, my first scandalous love affair; now, apparently, it would be my first roadkill. My eyes traveled from one face to the next, searching for telltale signs of how my companions were taking in the fact that we were planning to cook and eat unidentified game that had been tossed in the trunk like an old rag. There was some quiet speculation as to what it might be: too small for a monkey and too large for a rat, it was quite possibly a porcupine.

By the time we arrived back at the house, it was less a question of what it was and more of what we would do with it. Chris unceremoniously dumped the parcel on the kitchen counter and peeled away the paper. We stood there, pondering the unappetizing chunk of meat before us. The lusty haunch—plumper and deeper red than a leg of lamb, its ends hacked off unceremoniously—rested against the stained newsprint. Although my fellow dinner mates were all longtime residents of Nigeria, not one had ever seen bushmeat up close. As for me, I’d grown up expecting meat to come from a supermarket or butcher, carefully wrapped in crisp white paper or sealed beneath protective plastic film. I wasn’t feeling at all assured about ingesting such a messy piece of beast.

Our doubts, however, were soon overridden by curiosity. We’d gone to the trouble of procuring the bushmeat, so we really had to try it, we rationalized. Just this once. For the adventure.

Still, there was the problem of how exactly to proceed.

At that moment, June swept into the cramped kitchen. The mother of our young missionary, June was on just her second visit to Nigeria, yet she was the only one who seemed completely at ease—happy, even—about our predicament. She patted the meat firmly and confidently, like a mother slapping the chubby thigh of her toddler. With the patience and indulgence of a schoolmarm speaking to a roomful of children, she explained that bushmeat was no different than game meat, which she’d had her fair share of experience cooking. And with that, the rest of us heaved a collective sigh of relief. Never would I have imagined that this graceful woman, who brought to mind kitten heels and cashmere twin sets, possessed the aplomb to tend a dead rodent of unusual size in an outpost kitchen. But June was clearly at home in any kitchen, rifling through cabinets and examining every last jar in the refrigerator before submerging the haunch in a heady bath of red wine and olive oil made fragrant with herbs and whatever else she’d scavenged from Chris’s cupboards. She placed it in the fridge and made a date with us for the following afternoon.

The next day June returned, bringing red-currant jelly; a jar of salty, beefy British Bovril, another bottle of red wine; and several oranges. Cooing with satisfaction, she removed the meat from its marinade. The rest of us wandered off to take our usual spots in the living room, martinis in hand, while she put the roast in the oven and tended to the sauce on the stove. Then I sat and listened as the others came to terms with our grand adventure. Somewhere between the angst of that car ride home and June’s confidence, everyone’s disgust had faded first to resignation, then to anticipation. There was no turning back now.

After tossing back another martini and taking my place at the table, I hesitated only for a second when the serving platter was passed to me. The meat was fanned out in thin, rosy slices—the outer edges perfectly charred, the interior enticingly moist—and bathed in juices that were fragrant with orange and herbs. There was no indication that this had once been an unpalatable little animal scurrying through the African scrub. I gathered my courage, plunked two slices of meat, along with a dollop of red currant sauce, on my plate, and passed the platter to my left. The others served themselves with equal gusto.

June’s touch had produced an exquisitely tender roast that tasted more like lamb than what I’d imagined porcupine would taste like. There was a hint of the marinade, and the fruity tartness of the sauce was the perfect partner for the strong, wild flavor of what was now, simply and gracefully, game. We cleaned not only our plates, but the entire platter.

The next morning, our small group gathered in the kitchen to indulge in our ritual of gossiping over coffee before heading to work. We were pleased with our little culinary adventure of the previous night as only expats can be. But while the others let loose with smug comments and swagger, I silently sipped my coffee and smiled. I was reliving a terrifyingly bumpy ride on an Aeroflot plane, burgers and fries eaten tête-à-tête with the American ambassador with whom I’d had a dalliance, my initial attempt at bargaining with the women at Lagos’s outdoor food market for everything from bananas to baskets while children scampered about and offered to carry my bags for a price, everything that I’d experienced to get to this place, this moment. The self-conscious girl who’d boarded a plane just two months earlier had given way to an oddly self-confident woman, one who now had a gritty determination to head back to Paris and conquer what she had never before given herself the chance to do: take charge of her life. In that moment, I realized I was made of sterner stuff than I’d ever imagined.

After we finished our coffee, the professor pulled us over to the deep-freeze situated against the far wall, yanked it open, and pointed into the icy mist toward two fat objects bundled in aluminum foil. “Did you see what I brought yesterday?” he asked, as he bent down, hoisted one of the packages from the frozen depths, and peeled back the silver foil to reveal a large, thick slab of something glistening-white. “Rattlesnake!” he laughed. “Someone I know caught and killed it. Should we try and cook it?”

Back to How to Eat a Porcupine on Leite's Culinaria