This fertility flank steak recipe from Julia Child calls for soy sauce, olive oil, and a few other ingredients. Whether you’re looking to be a mum or not, we can’t deny the deliciousness of this recipe.

“Ten, eleven, twelve, thirteen, fourteen…” I counted, backtracking the days on the calendar. “Fifteen.” I gasped.

My husband and I had been in our mid-30s before we’d finally got around to talking seriously about having kids. We agreed to try, and if it didn’t happen, then it wasn’t meant to be. Totally chill. Totally calm.

Six months later, I wasn’t pregnant. I wasn’t chill. Nor was I calm. I started doing things that were anything but chill or calm. Like renouncing red wine and coffee. Obsessively charting my cycles. Peeing on a damn stick every single day of the month to confirm when I was ovulating. Feverishly taking my basal body temperature before I set foot out of bed in the morning. (Apparently the mere act of standing up throws your entire temperature out of whack, so if you get up before you’ve dutifully applied the special thermometer, you might as well not even bother.) The only result of all this was to make me edgy, irritable, and on the perpetual brink of a crying jag. (I blame the teetotaling for 95 percent of that.)

After 13 miserable and histrionic months of negative results, our nerves whittled to friable twigs, Mark and I decided to celebrate our eighth wedding anniversary not by having dinner at some San Francisco restaurant that required dress-up and makeup, but by holing up at home and cooking together in comfort. It was the night we finally pressed into service a recipe for a flank-steak marinade that my mother-in-law had emailed us long ago with the promise of succulent results, even if you lived in a scrunched urban apartment with only a broiler and no grill. The source? Her revered copy of The French Chef Cookbook, by Julia Child.

Our first order of business that night was to make the marinade. Given the amount of minced garlic and shallot called for in the recipe, the mixture was more pastelike than liquid, requiring bare hands to rub the piquant mixture evenly over the two pounds of fat-streaked meat. While I shiatsu-ed the steak, Mark tended to the second order of business: yanking the cork from a verboten bottle of our favorite pinot noir and splashing us each a hefty pour.

After the steak was marinated and broiled to a bloody rare, we carried our plates and glasses into the living room and plunked down on the couch to indulge in a shared passion: politics. Not exactly the stuff of bodice-ripping, euphemism-stuffed Harlequin romances, I know. But our anniversary that year happened to fall on the night of the second presidential debate, and we weren’t missing a moment of it. This was the town-hall debate hosted by an increasingly frustrated Tom Brokaw, who had to keep reminding candidates Obama and McCain of the rules. (This was also the debate that would later be parodied on Saturday Night Live, due to McCain’s restless and bizarre meanderings around the podiums.) By the time it ended, with Brokaw asking McCain to please get out of the way of his teleprompted script, our bodies were weak with laughter and wine.

And that steak, my Lord, that steak! It is not revisionist history to describe it as obscenely delicious. Between ecstatic bites, Mark and I would pause the TiVo so as not to miss a single Brokaw-ism and exclaim in disbelief over the steak’s intense beefiness and suppleness.

One of the most maddening “how to get pregnant” tips out there is the one that tells you to relax and just let things happen. Thinking about relaxing doesn’t work. Talking about relaxing doesn’t work. Forgetting about relaxing in order to eat steak and suck down a bright bottle of Anderson Valley pinot noir? That worked. By the glow of the TV, we sank ourselves into that steak-and-wine dinner, allowing our bundles of shredded nerves to be coddled with every bite we took, every sip we swallowed, every guffaw we shared. Thus it was with laugh-lightened spirits that we headed to bed.

A few weeks later, I was pregnant. Because of the meticulous math that all hopeful parents know so well and come to revile, I knew conclusively that it was that steak night that’d done it. I’d never even met the woman, yet Julia Child had gotten me knocked up. But even if the meal hadn’t produced such unexpected results, we still would’ve marveled at that marinade. It produced what was truly the most flavorful steak I’d ever cooked at home.

Still, I soon forgot all about that steak until what would’ve been Julia’s 100th birthday, last summer. A kind of foodie panic set in as I scrolled through the masses of adoring Tweets, and clicked on links to articles and blog posts that waxed rhapsodic and, in some cases, spasmodic about Julia’s boeuf bourguignon and her gratin dauphinois, her cassoulet and her coq au vin. What sort of foodie was I, if I couldn’t instinctively put my finger on my favorite Julia recipe? I sat there, paralyzed by the showcase of classic French recipes that didn’t resonate with me at all.

Then I recalled a passage I’d read in Julia’s autobiography, My Life in France, which noted, almost in passing, that although they’d wanted a family, she and Paul had been unable to have children of their own. It was an unexpected and seemingly small part of her story, practically an aside. Yet reading that detail of Julia’s life, as I had in the days before I was pregnant, gutted me with its poignancy. Remembering it now, I looked up from my laptop. For me, the most life-changing recipe of Julia Child’s was sitting across the breakfast table, staring me in the face, all plump cheeks and blue eyes. That afternoon, I took those plump cheeks and blue eyes to the store to buy a celebratory flank steak, which we marinated and broiled the Julia way.

Two weeks later, I discovered I was pregnant. Once again, it was Julia’s doing.

My favorite Julia Child recipes have always been the most basic ones, the ones that taught me the foundations of cooking. Not French cooking, not fancy cooking, just cooking. Like that flank-steak marinade, which I’ve since christened “Fertility Flank Steak,” much to Mark’s utter and lasting embarrassment. These quiet recipes maintain an elegance all their own, a modest force in their simplicity. Deep within each of them is reflected one of my favorite facets of Julia’s personality—not the impressively talented side, but the unfussy side. The side that served her guests Goldfish crackers and unashamedly declared her love for McDonald’s fries. The mom side. That’s the Julia Child I want in my kitchen.

For those of you who love to sear steak yet live in an apartment with little or no exhaust system, the broiler makes a relatively smoke-free alternative to a hot cast-iron skillet. Just saying…. 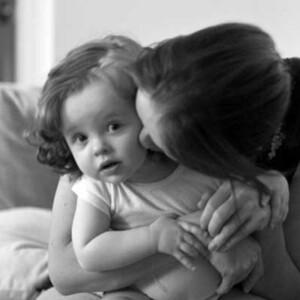 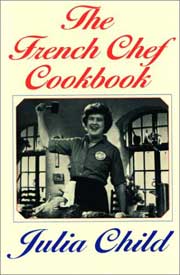 Simple, suave, so good! This is a great recipe for a marinade that’ll make your steak stand up and sing or dance around the grill. With just enough flavor of its own, this marinade is the perfect one to showcase the flavor of your flank steak. I omitted the thyme, as I find that introducing herbs into a marinade is often like introducing your best friend to your new beau—sometimes she just runs off with your catch! This is also a great marinade for the flat iron steaks that are widely available now. In fact, I think I much prefer the taste of this marinade with the flat iron. See? Now I’m the one running off with someone else’s best beau!

In my continuing search for easy, fast recipes (another new favorite is Roast Pork Loin with Apples and Onions), I came across this recipe that is totally perfect for today, Julia Child’s birthday, and totally weeknight friendly. Toss the steak in the marinade, go about your day, and then quickly pop it under the broiler and you have a perfectly seasoned and sizzling steak ready for carving. Served with minted peas and a garden salad, it is a simple supper for life on the go.

Between the marinade and the grilling, this steak had a lot of very nice flavor. It’s such a simple preparation; there’s nothing to recommend in the way of adjustments. A great weeknight dish because 20 minutes of marinating will work and the dish should be on the table in about 45 minutes from start to finish!

I was worried the small amount of marinade wouldn’t be enough to impart a good depth of flavor into the steak, but I was mistaken! The garlic, lemon, hot pepper flakes, and soy sauce created a delicious steak that grilled up in minutes and lasted about that long on the dinner table. I marinated the steak for an hour at room temperature. The steak was cooked on a charcoal grill.

I ended up making this recipe twice in a row, first with a cut of meat labeled London broil and then, just to make sure I was accurately testing the recipe, a second time with flank steak. The 2 pieces of meat looked basically the same to me, but the London broil was 9 ounces smaller and marinated for 24 hours, while the flank I let marinate for only about 9 hours. I marinated each in a resealable plastic bag because there’s not much marinade and this helped me distribute it better. I also turned the meat several times. Both times we lightly dried the steak before grilling it, let it rest before thinly slicing it, and served it on warm rolls with a sour cream, Dijon, and horseradish sauce. The meat was tender and wonderful. The seasoning from the marinade is very light, so you really just enjoy the flavor of the beef. We all agreed that the smaller cut that marinated longer was best.

This is a very straightforward, easy-to-make recipe. I used a 2-pound flank steak and marinated it overnight. We cooked it on a stovetop cast-iron grill pan for 3 1/2 minutes per side over medium-high heat. The steak was just on the rare side of medium-rare. We ended up getting three meals out of it. We had the steak sliced thinly on the diagonal the first night, a “Thai-inspired” steak salad the second night, and there was even enough meat left over for another meal of thinly sliced steak. This was a good reminder of how easy and economical flank steak can be. I’m thinking of adding some chile-garlic sauce or perhaps some red curry paste when I make this again. I want to try to kick the flavor profile up a bit.

Stephanie V.W. Lucianovic is a writer, editor, author, and lapsed cheesemonger. She is a contributor to The Washington Post, New York Times online, and CNN’s Eatocracy. Her book Suffering Succotash: A Picky Eater’s Quest to Understand Why We Hate the Foods We Hate is a non-fiction narrative and a heartfelt, humorous exposé on the inner lives of picky eaters. A recovering picky eater-turned-foodie, she lives in the Bay Area with her husband, son, and assorted cats.